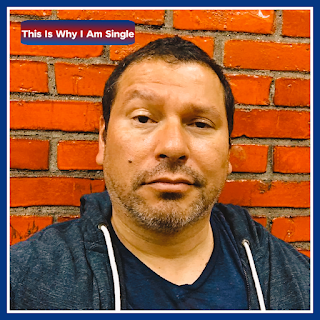 It happens to everyone on social media, every so often, but this one is so egregious, I just had to share...

You might remember that time I posted about my photographer friend, Dusti Cunningham, posting a pic of me from an event where I was squished awkwardly between two people... if not HERE'S a reminder.

After that, I made peace with the fact that I can not control every image of me that appears in social media.  I also made peace with my less than International Male model body and the many angles by which it can appear to be larger or weirder in places than it actually is...

Even that didn't prepare me for this horror...

Speaking of horror, it all started with me popping over to the Ace Hotel theater to see THEY/THEM 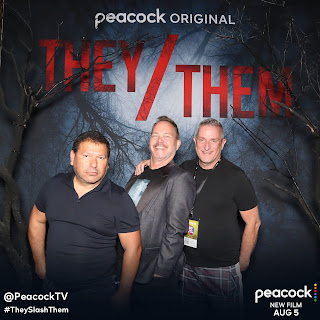 with muh DABs, Dennis Hensley & Glenn Gaylord.  It is a horror movie with a twist, wherein maybe the LGBTQIAs aren't the victims we're used to seeing. (Mini Review: While it didn't break any new ground except for turning the tables, and isn't a bold new take on slasher movies that some hoped it might be, it was an entertaining enough gathering of Dead Meats and kills, much like the many other slasher movies it means to emulate.  It could have been gorier, but I thought is was alright.)
Anyway, it was a the OUTFEST closing night feature and the theater was abuzz with film makers, the movie's cast (including Kevin Bacon) and a bunch of gays. One of the gays there that I know was Greg Hernandez of GREG IN HOLLYWOOD.  We shared our excitement for the movie we were about to see and caught up on recent stuffs and then Greg snapped and posted this pic... 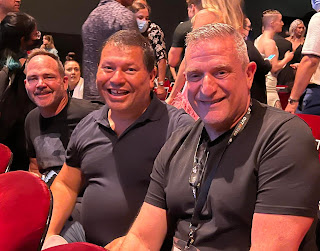 Now, I'm not angry or upset with Greg for posting it... I just thought it was worth mentioning how unflattering it is.  First, there's the harsh shadows and highlights, offering no forgiveness in facial features or body bumps.  Then there's the indeterminant look on my face, like I was puzzled to be happy... The pièce de résistance has to be the "Bun in the Oven" appearance of my tumtums.  I know I have a belly, and sometimes I have the presence of mind to suck it in when there's a camera pointed at me... in this case, I scooted up to the edge of my seat, but turned & slouched a little back to keep from blocking Dennis in the picture and, apparently, carried a child to term.  I look like I'm pregnant, along with the boobies for feeding.   Honestly, I'm not fit, but this is a bit exaggerated because of the weird way I contorted my body for this shot.  I see this and ask myself, how am I ever going to find someone who's attracted to me, if I keep forgetting my America's Next Top Model challenges training??
Was this really my best shot this week?  UGHHH!
Again, I'm looking at this with humor, because if we take this social media stuff too seriously, we could really fuck ourselves up obsessing over every post that includes us, that we can't control.  I try to choose to enjoy the moment and worry about secondary factors, later.  Like 3 hours later, when I see the photo and OOF, it hits me like a punch in the ample gut! ..but in a good way, like in the movie DODGEBALL.  Also, if this pic scares off any potential suitors, then so be it, who needs someone who's gonna obsess over their images AND mine, to boot?  Ain't got time for that nonsense.
Meanwhile, I posted this pic, 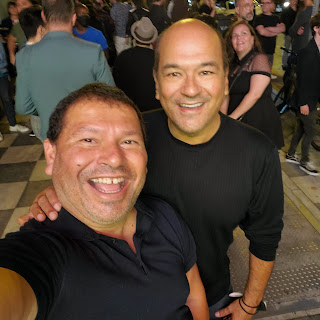 Which Greg might have said he found quite flattering,  You're welcome!!
I hope you get a husband, a rescue pup,  a subscription to Hulu/Disney + and a fancy house on a private beach with great lighting from this picture, GREG!!!!!
(That may sound mean and resentful, but wouldn't it be neato if you actually did?)

Posted by Danny in WeHo at 6:30 PM No comments: