This Is Why I Am Single - Fueling the Fire 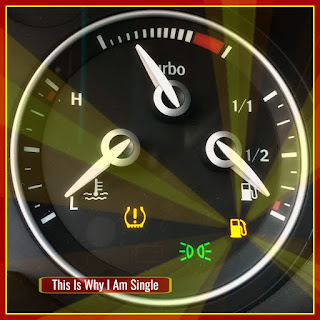 As you may know, I've been rather busy, if not running around in a dress & heels, then funning with my friends and keeping up with social obligations.  Even in a rush, I'm sometimes surprised when I realize the reason why I do some of the things I do.  For example, I like my iced tea unsweetened, but I prefer my coffee creamy and sweet.  Why not unsweetened like my tea? Why don't I like my tea sweet?  It occurred to me one day that I liked my coffee that way because when I was pre-school and staying with my grandma, I'd ask to join her in her morning coffee.  Not wanting to make me feel left out, she poured me some java.  I realized that she would pour a bit coffee into a mug of milk for me.  Since I realized that, every cup of creamy coffee is a sweet reminder of Grandma.  Well, running around lately, as I have been, I didn't keep an eye on fuel gauge as I usually do.  I kept driving to my destinations with the thought of, 'I'll get gas on the way home". Then, I would forget to do it.  Of course, a little late on my way to an engagement further away than most, I was so upset with myself that I had let my tank get so low and I had to stop for gas, making myself later.  That moment of regret was compounded by the sudden flashback to my mother in a mini-rant about my alleged father always using her car and leaving the tank empty.  She told my juvenile self to refuel when I reach half a tank.  Come to think of it, I usually do, and most certainly if I reach a quarter tank!  I realized this is something I do because my mother was so upset and I didn't want to be like my alleged father, but here I was, running late and having to stop for gas.  Is it more because I don't want to upset my mother or because I don't want to be like my alleged father, always skitting around on the verge of having pushed it too far and dying out?  Prolly a combination of the two, no?  It's these little revelations that sometimes explode into bigger personal dramas or, worse, personal excuses...

This Is Why I Am Single; sometimes I'm like my alleged father.

Now, please enjoy a vintage photo of me with my coffee-pushing Grandma, prolly right after a cup o' morning joe... 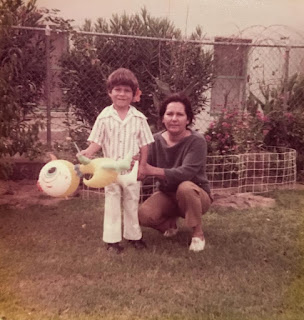 Email ThisBlogThis!Share to TwitterShare to FacebookShare to Pinterest
Labels: alleged father, Grandma, mother, This is why I am Single

Gay of A Certain Age - A Taste of Evil 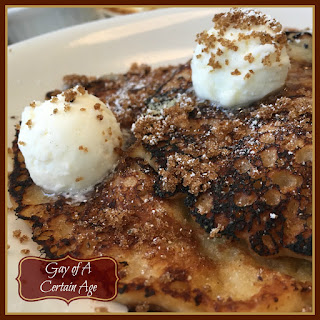 I'm in the final weeks of my quest to lose weight and recreate my friend Geoff's "at 50" photo.

I've done pretty well by simply cutting out snacking and not eating badly.  That's pretty easy during the week when I can have a salad at lunch and grab a small salad on the way home from work.  It is much more difficult on the weekend when evil friends call for brunch.  Like when muh EVIL DAB, Glenn called and said let's go to that Salt's Cure spin-off.  What was I supposed to say? "No"?  And before I got there, did I even suspect those assholes would have gluten-free griddlecakes?  I had no idea and those assholes DID have gluten-free griddle cakes, with apples even!  I thought I was just gonna have an egg over-easy and a sniff of bacon, but no, I ordered THIS: 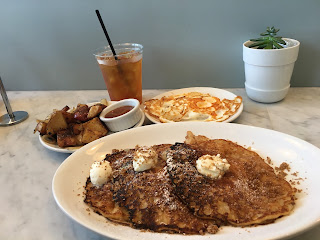 I could blame myself, but why, when it was that asshole Glenn who suggested the place and those Salt's Cure assholes who bothered to consider my gluten disability!  FUCK THEM!!

And then, on Sunday, before going to see the fabulous Miss Coco Peru, (with a "friend"?) we went to the dinner serving Salt's Cure and had a reasonable salad and a Negroni (and a half).  I felt good and lite sitting there laughing at Miss Coco's show. 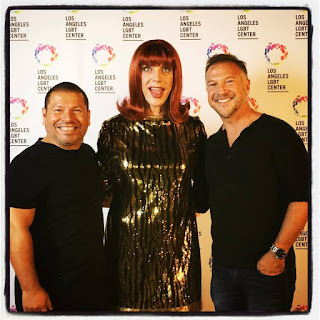 After the show my "Friend'? and I said our goodbyes and I was left with a post-show buzz.  I simply had to share my appreciation of the show with someone and, luckily, muh DAB Dennis Hensley was saying his goodbyes to Miss Coco, after which, I offered to accompany him to food.  We went to Lala's on Melrose. 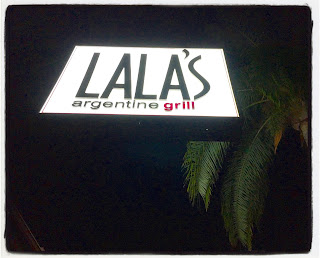 It's a delightful restaurant with a fairly varied menu, of which I parttake from time to time at lunch with muh Work buds.  Well, Dennis ordered his meal and I had already eaten so I decided I would not order any food and sit and simply enjoy his company. I had the flan. 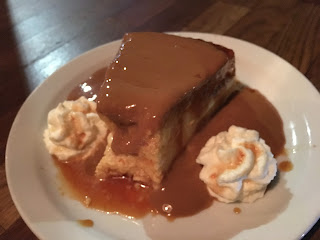 FUCK YOU, LALA'S!! FUCK YOU, DENNIS HENSLEY! It was delicious!

Luckily, I've kept up with the other minimal actions of my plan and this morning I was at my lowest point, yet!  I don't know how much I'll lose before October 3, or how I will look, but I do know that this weekend's missteps were not detrimental.  That THAT, Glenn, Breakfast by Salt's Cure, Dennis Hensley and Lala's!!  Looks like if I do get fat, it won't be because of you... as much as you tried!!

As a Gay of A Certain Age, I know how easy it is to fall off the wagon after working hard to get something done, but I also know that he wagon doesn't move all that fast, so I can always catch up and jump right back on! 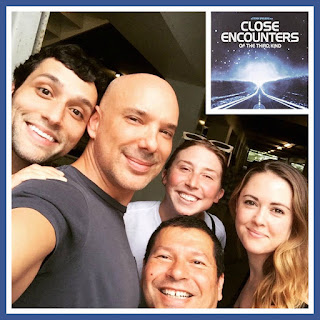 OMG! That Chico's Angels show really pooped me out!
I just wanted to check in with you and let you know that I'm alive and that I enjoyed the holiday by going into a dark cool dome and watching UFOs fly around.
I also played with cats.

Posted by Danny in WeHo at 2:43 PM No comments: