He Don't Even Know! BREAKTHROUGH! 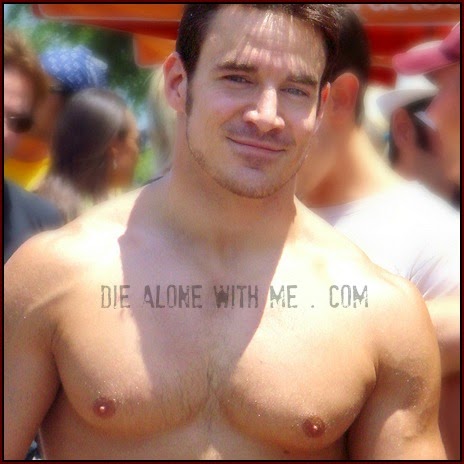 While responding to a comment left by Peter on my first He Don't Even Know entry, I had a Breakthrough!  I started DieAloneWithMe.com as a a light & humorous look at being over 40, single and not necessarily making finding a partner a top priority or commiserating on how difficult it can seem.  I do have the hope that there could be something of substance to my entries, but I didn't think that this soon into it I would make an interesting (to me) discovery about myself.

Peter quite respectfully expressed his point of view on my sneaking pics of guys.  I think that because it wasn't mean and snarky, I actually thought about my response instead of just tossing off a sarcstic come back.  While recounting my experience of being on the other end of a sly lens, it occurred to me that my reaction was, "oh well," but deep inside, thinking that someone might have found me attractive enough to sneak a photo hit me somewhere left of Ego and straight on through to I Really Needed That, in a kind of sad way.  I realized that I'm compelled to sneak these pictures because I really desire someone to do that to me (find me attractive).  BREAKTHROUGH!

I don't think that my realization does anything make it less creepy to people, but I do hope it does help with understanding it.  As a reminder, HE DON'T EVEN KNOW! is short for He don't even know he's my boyfriend and not necessarily he don't even know I took his pic.  As you can see above, he does know I'm taking his pic, but he doesn't know he's my (imaginary) boyfriend.

That's Chris Rockway, I had no idea who he was when I took this pic.
Posted by Danny in WeHo at 12:05 PM No comments:

Gay of a Certain Age 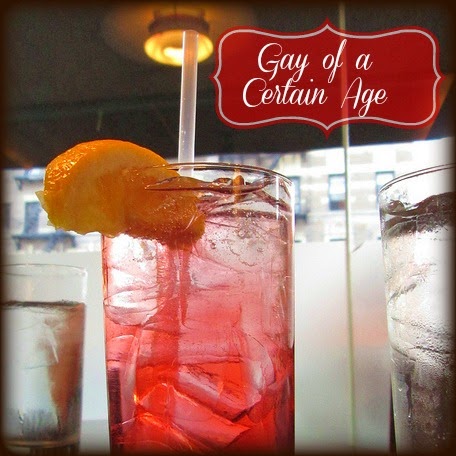 I love how we, as humans, decide things and must attribute those decisions to certain outside factors.  That is why I've decided to attribute certain habits, behaviors and inexplicable thoughts to the fact that I am a GAY OF A CERTAIN AGE.

For example, as a gay of a certain age, I've decided that my drink of choice should be Campari & soda.
No more Cosmos, no more Appletinis or Vanilla Lemon Drops.  When I am at my gay bar of choice (which features comfy climate control and a well monitored noise level) I will order my Campari & Soda and nod wisely and nostalgically at the youths sipping their silly sweet drinks.  I am 47.
Posted by Danny in WeHo at 10:46 AM No comments:

Email ThisBlogThis!Share to TwitterShare to FacebookShare to Pinterest
Labels: Campari & Soda, Gay of a certain age

Too Busy For Love! 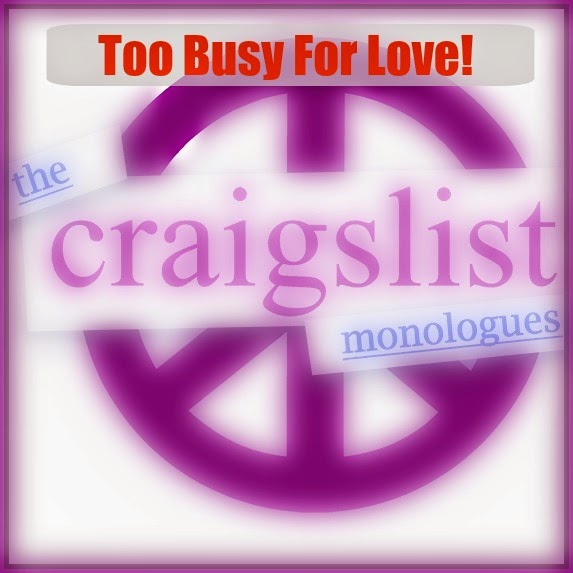 When dating wasn't going so well for me and I felt free time gnawing away at me, I found other ways to fill it.  That's how I became TOO BUSY FOR LOVE!

Honestly, I keep myself so busy with performing, activities, traveling & friends, that I can't even imagine when I would even have time to date someone.  I know, when it actually does happen, time just clears away for what I really want... but until then, I'm very busy!

Email ThisBlogThis!Share to TwitterShare to FacebookShare to Pinterest
Labels: Craigslist Monologues, Too Busy For Love

He Don't Even Know! 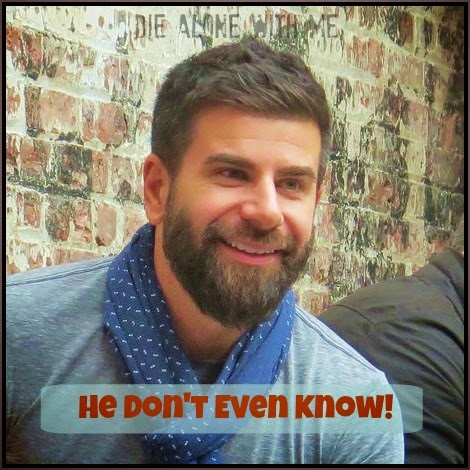 As a single, gay man, I'm bound to have hobbies.  One of them is photography.  Put a camera in my hand and I'm happy.  One of my specific gay activities with a camera is a sport I call sniping. I'm a sniper.  I shoot people (guys) from far away.  Sometimes I get them, sometimes I don't.  Sometimes when I do get them, I decide the chase was fun, but I don't want the prize and I release (delete).  There are some out there who say this is creepy.  I can't say that I totally disagree, but it's an odd addiction wherein I MUST get the shot.  I assuage my misgivings by reminding myself, that the images I am capturing are in the public and they aren't anything anyone else wouldn't see if they weren't standing where I am.  Also, I will not take these photos to humiliate anyone.  ( I cringe when people laugh at those unfortunate people in the aisles at Wal-Mart.  It's not nice.)

So I present to you HE DON'T EVEN KNOW!  Short for he don't even know he's my boyfriend.
These are photos I've taken of guys (not lifted from the web - all original) who I think are handsome, sexy, intriguing, probably a really swell guy, someone I'd love to sit in a love seat watching 9 TO 5 with...
If you're not creeped out, enjoy!
Posted by Danny in WeHo at 11:42 AM 2 comments:

Email ThisBlogThis!Share to TwitterShare to FacebookShare to Pinterest
Labels: handsome guy, He Don't Even Know

This Is Why I Am Single 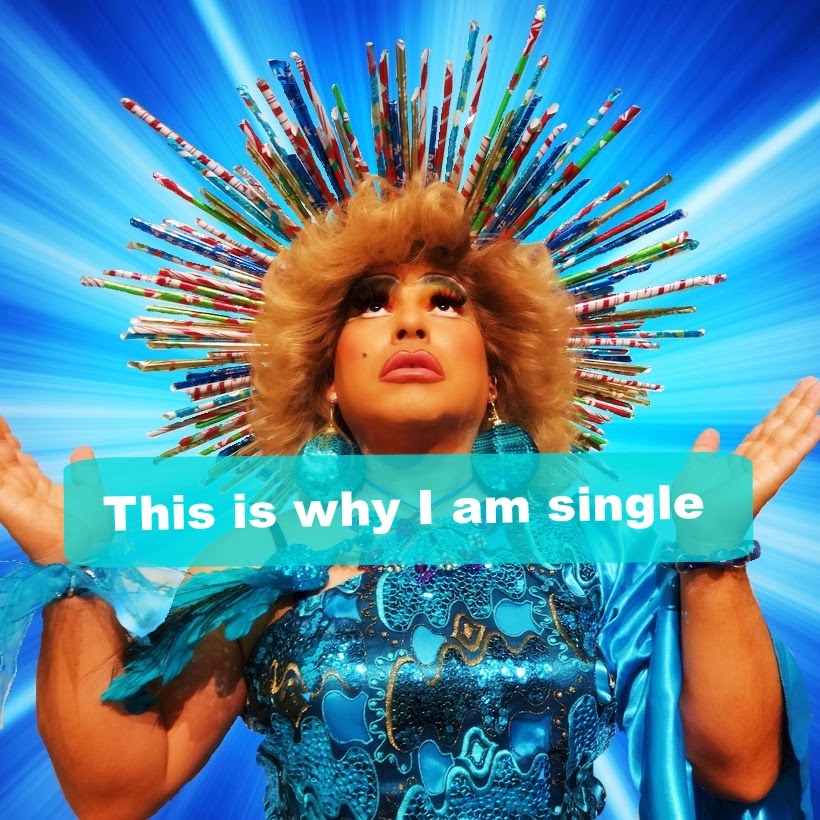 I am an actor, in addition to my 9 to 5 job.  I've been doing a show since 2003 in which I play a female character.  I play the part in drag.  Apparently, that makes me a Drag Queen.  I've come to terms with the label, since it is the easiest one to carry, because people don't understand when you say "actor" and they see this- a guy in a dress playing a woman.
I have no problem with  drag queens, I just don't think I fulfill the requirements or earned the title (and if you look closer at my make-up you most probably would think, 'Yeah, NO').

This is why I am single- You tell a guy you're interested in that you do a show in drag and 80% of the time they'll roll their eyes and dismiss you as a drama queen, whose bedroom is all done up in lace, with a big sequined sign that says "You Go, Gurl" over the bed. (Not that there's anything wrong with that, but my bedroom is disappointingly lacking in any style.) So, I've learned to either save that nugget 'til later on, or use it to judge an iffy character right on the spot.  Really, who wants to date someone with masculinity issues so severe that the sight of a stray fake eyelash would turn them into Robert Duvall in THE GREAT SANTINI- hyper macho,aggressively competitive, frustrated and always seeking Daddy's approval?

I'm not going to stop doing a show I really enjoy performing in, just because it makes me unattractive to some guys.
Posted by Danny in WeHo at 6:14 PM 4 comments:

Email ThisBlogThis!Share to TwitterShare to FacebookShare to Pinterest
Labels: actor, Chico's Angels, drag, This is why I am Single

Die Alone with Me

I haven't given up on love.  I think I've just given up thinking it's going to happen magically at some special time.  I think as I get older, I get more comfortable with myself and more accustomed to that comfort.   This makes it difficult to compromise and deal with another's faults and special behaviors that might have made them seem adorable to me when I was younger.  Now, I find that being alone for the rest of my life is a distinct possibility.  I am a single gay man, with no partner and no children.  I don't even have a dog.   I'm not sad.  Occasionally I'm lonely, but I enjoy my own company.  I got the idea for Die Alone With Me, when I considered my other friends, who are my age, single and gay, with no children and dating.  Maybe when we're in our 80's we'll be roommates, like the Golden Girls, single and dying alone together.  This is not a place of loneliness, but a place for finding people like you, or people you love, who are alone and can find the humor in it. Seriously, you gotta laugh, otherwise you'll scare people off and you'll end up dying alone alone!  So, if you're aging, getting more finicky, gay or straight, looking for a chuckle or an accidental insight, pop on over and DIE ALONE WITH ME.
Posted by Danny in WeHo at 5:39 PM 5 comments: