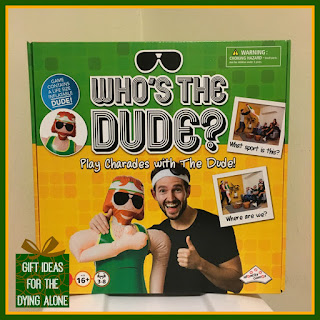 This is the first time I am an actual recipient of a Gift For the Dying Alone.  Let me tell you, I just received this present last night and I couldn't wait to tell you about it!
I got WHO'S THE DUDE? for Christmas from my friends, Oscar & Daron.  I'm not sure if they knew they got me a Gift For the Dying Alone... I mean last year they got me the board game version of WORDS WITH FRIENDS -DELUXE, knowing full well, I rarely have friends over to my place.  Well, this year they got me a game with an inflatable playmate!!
Yeah! This blow up guy, The Dude, plays with me!

I took him out of the box and blew him. We became fast buddies... 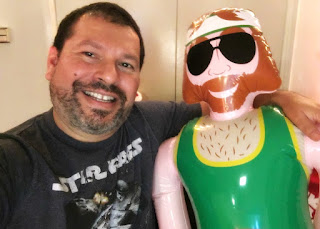 We played charades, as suggested... 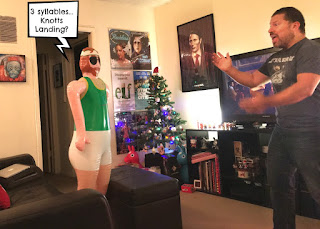 But, when we were done, we agreed that The Dude was not ready to be deflated, so I poured us some Nigori Sake and we watched TROOP BEVERLY HILLS together. 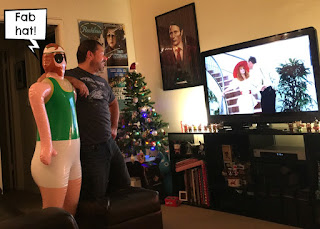 After he told me how Shelly Long's character reminded him of Private Benjamin and his Aunt Solly, we got deeper into conversation and found that we had a lot in common!  We liked a lot of the same stuff and had a very similar frame of reference.  Then, I found myself liking the way the tiny Chrismas lights on my tiny Christmas tree reflected off of his beard.  I got lost in his dark sunglasses and realized that I was becoming very attracted to him.  Mentally AND physically!  I mean. look at that ass! 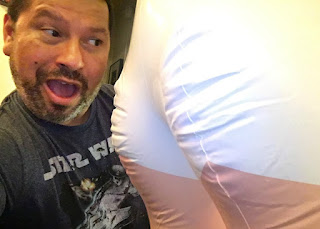 As if you couldn't see this coming, we ended up in bed together, sounding off our favorite TALES OF THE CITY quotes to each other...  and fooling around. 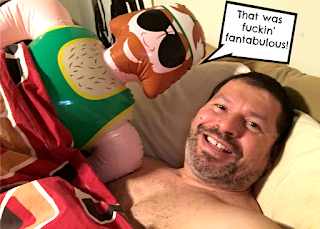 After enjoying some more sake and giggles in bed, we had our first fight. 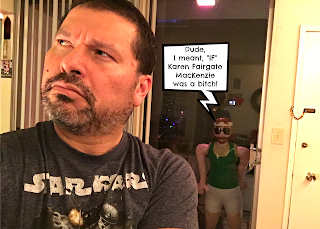 After I finally let him back in (the neighbors were giving us weird looks), we hugged for a little while, made our apologies and I deflated him.  I put him in my underwear drawer where he'll stay until I have time for another in-home date.  Did I mention I'm going to El Paso for Christmas?  I'll be gone for a  few days and I hope he doesn't forget the good time we had and how we survived our first tiff.  I don't know, maybe we'll have a go at it, all I DO know is that this is the best Christmas gift I've gotten in a while!  And as one of the Dying Alone, I can whole heartedly recommend this gift!

Email ThisBlogThis!Share to TwitterShare to FacebookShare to Pinterest
Labels: Gift For the Dying Alone, Inflatable man, Tales of the City, Troop Beverly Hills, Who's the dude?, Words with Friends