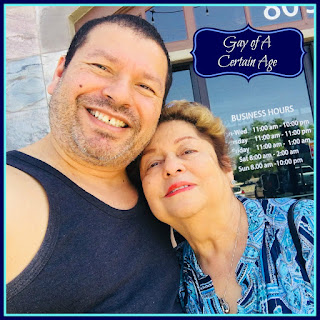 Recently, I went home to visit my Ma, my friends Teduardo and family. 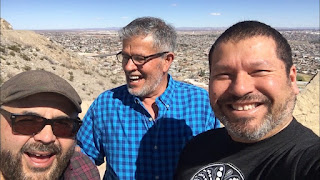 There was no big event or holiday, just an open weekend and some great airline prices comingling and creating love. Speaking of love, I immediately fell in love with Teduardo’s new dog, Bizbee! 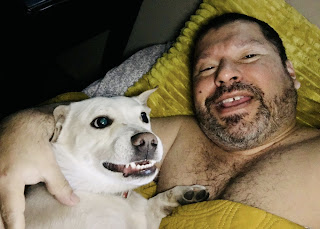 He’s a recent rescue and a bundle of energy & endless kisses (that is until he decides to chomp the nose on the face he is kissing). After falling in love with Bizbee and making out with the other dogs I love, we did the usual things; we ate out, ran a few business errands, ate out more, went to the movies, caught Bill Maher’s stand up at The Historic Plaza Theatre, ate out more, ate homemade pozole when I picked up my Ma to take her to an art show in Las Cruces and ate out. The usual stuff. 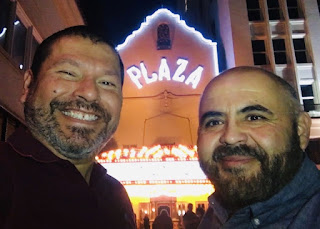 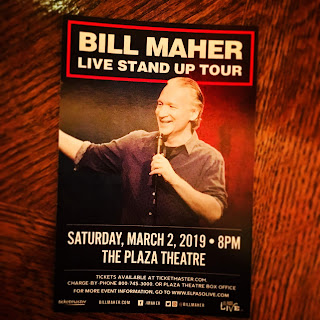 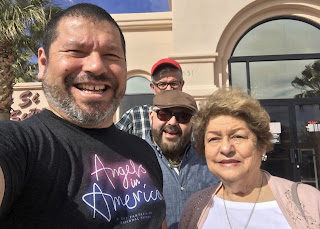 It was a nice, quick weekend visit and then, I was on a plane heading home, back to the daily grind. On the plane, I felt a little melancholy nagging in the back of my mind. We had a good time, didn’t we? Everybody was healthy and happy, weren’t they? Bizbee was secretly tucked into my carry-on, wasn’t he? (No, he wasn’t.) Then I realized something wasn’t right.

When I was young, every Sunday was Grandma’s day. I remember looking forward to visiting my mother’s mother, Thomasa, when I woke up on Sunday morning. I couldn’t wait to get out of church, go visit the other Grandma (my Alleged Father’s mother and father, whom I loved, of course, but I had a special bond with Thomasa) and happenchance cousins of the week and then drive the endless five-minute car ride to Grandma’s. I loved being greeted by the revolving cast of crazily barking dogs along the fence line as we drove up. I endured the exercise of squeezing through the gate as not to let said crazily barking dogs out of the yard. Then, I would open her screen door and just walk in; it was always open. I’d be greeted by Grandma with a big hug (Sometimes I would talk like Aunt Oralia, imitating her trademark nasal “Hellooo, Tommy! How are you?”) If it wasn’t already on the stove, Grandma would get to fixing us all something to eat. On a not unusual Sunday, you could find my mother with her four kids, her sister Evelia, with her four kids and brother Alonso and his lovely bride, Bertha, all finding or making room to gather and eat in Grandma’s small three room shotgun style home. There was a huge yard on the side and the kids would all play with each other and the dogs (and usually some guest dogs), in later years we made soap opera and movie spoofs with my older brother’s fancy video camera. As I got into my college days I didn’t go every Sunday, but the full days continued with the great-grandchildren. Then, I graduated from college and moved to L.A. And there was the sunset of those happy Sundays. Age finally caught up to Grandma, she developed the Alzheimer's and was placed at the Sunset Haven where she could be cared for around the clock. It’s a natural and logical ending for the chapter. 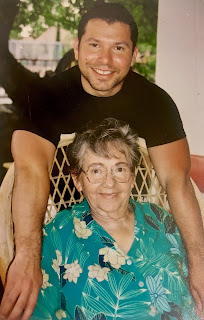 On the plane the feeling kept nagging at me, I felt a little like I was a character in a non-existent spin-off show. …kind of like Richie Cunningham’s older brother, Chuck, going into the army and finding himself stuck behind enemy lines and having to dress in drag, pretending he’s somebody’s mute aunt, while falling in love with an enemy gas mask sales lady… That never happened, but I felt kind of like that… Then, I realized what my damage was. When I was in college and my Sunday visits were getting spotty, I comforted myself with the idea that this would continue with my Ma. My older brothers and sisters would continue to bring their children on Sundays and I’d be the childless uncle dropping in from time to time, like my mother’s brother, Bo. My mother would live in that house and that’s how it would be. But that never happened. My mother retired early to take care of Grandma, but when that proved to be too much for one person, Grandma went to Sunset Haven and my Ma stayed in her house. I had already moved to L.A., my older brother had moved to San Antonio, my sister, Isabel had erratic hours as a nurse and sister Julie & family always had sports events as participants or coaches on Sundays. That didn’t leave many visitors for my Ma. That’s not the way this was supposed to go! Sunday is Grandma day!

This is no actual tragedy. My Ma lives with my sister Julie, not the Sunset Haven and she enjoys days out and visits here and there, and it’s all nice. I enjoyed my visit with Ma, and of course, she loved her visit from me. I JUST KNOW SHE DID. Anyway, this post isn’t really about a Sunday tradition that petered out, it’s about the realization itself. That nagging feeling was pretty strong and until I was able to suss it out and move on, I was a bit haunted and not feeling whole. I began to wonder how many other things that are cluttering up my mind and heart are all related to events that never happened or things not being how I thought they were gonna be-

SIDE BAR!!!- All through high school I had one of those nagging feelings. I felt like I wasn’t doing it right and couldn’t be 100% happy or comfortable. I finally realized that I didn’t look or feel like I thought I was going to because when we first got cable, GREASE was on Showtime on endless rotation and I watched it, at least, 4 and a half bajillion times! While my issue wasn’t that I wasn’t bursting into song at any moment (Don’t think I didn’t) it was that my expectations of my high school experience were based on 30 year-olds playing teenagers! I’m fairly certain that I was aware that John & Olivia weren’t 17 year-olds when I was watching the movie, but something in my psyche absorbed the idea that I, and my friends, were going to look and sound as mature as Sandy & Danny and we would lead the kind of lives where we shared our secrets with each other, went to nationally televised dances, rode motorcycles, had PJ parties and gathered at the local soda shop. I’m also pretty certain that I literally expected a big carnival with game booths and a carousel & other rides in our football field on my last day as a high school student. 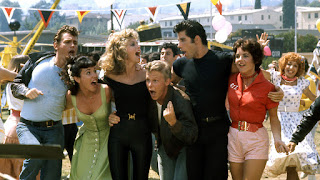 (I seriously thought this was gonna be me...)

I wonder if these little nags are strong enough to be debilitating. Could these little nags be stopping me from doing things I want or should do? Do I have a little nag keeping me from finding a partner/lover/husband/maid? I do not know. What I do know is these little revelations come randomly, but not necessarily unexpectedly. Not unexpected because once I realize there’s a nag, a little introspection and self-reflection will help draw the nag to the surface and identify the root. OMG! Is this why people go to a therapist??? Wow. All this time I’ve been my own therapist and didn’t even know it! Think of all the money I’ve saved!

As a Gay of A Certain Age, I’ve learned that melancholy and a lack of feeling whole can be addressed by figuring out what I am feeling and why. I’ve also learned that you can’t force this stuff, it comes when it comes. Finally I’ve learned, no matter how many times a person has seen GREASE, their life will most likely be like GREASE 2. …And I’ll take it! 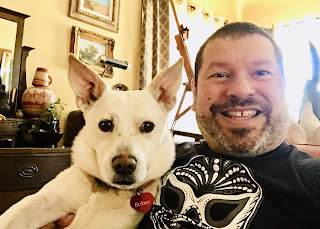 Plus one more shot of me and Bizbee
It's LOVE!
Posted by Danny in WeHo at 11:03 AM