Gay of A Certain Age - A Reconsideration of Romance and Love; or Who Was On First? 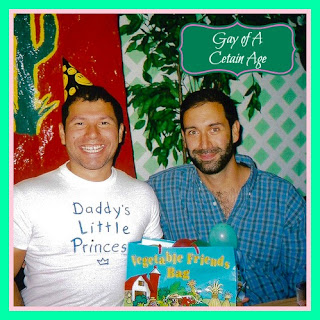 What is wrong with me?
See this guy? 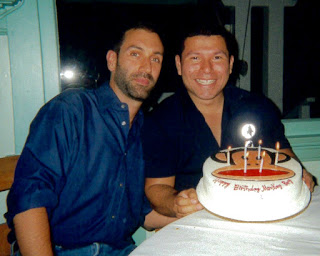 His name is Jim.  We held hands and made out & stuff for over 13 months.  We are still friendly now, just not stick our tongues in each others mouths friendly, anymore.  I always call Jim my first and only significant romantic relationship.  Then, I embarked on a project to make my home less cluttered (BIG MISTAKE) and I decided to clear out my photo albums- I took all the photos out and dumped the albums and am now in the very long process of scanning in the photos I wanna keep (which is all of them) and (trying to) tossing the paper photos in the recycle bin.  That when I came across this guy... 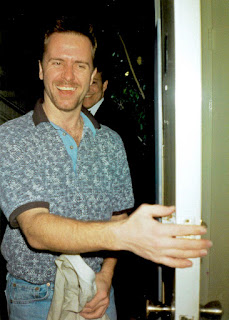 His name is Ed.  I forgot how we actually met, but I remember I really liked him and we held hands and made out & stuff  for a few months. 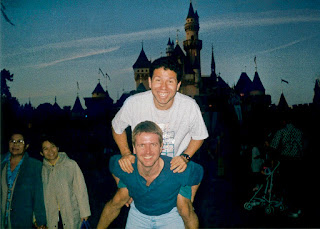 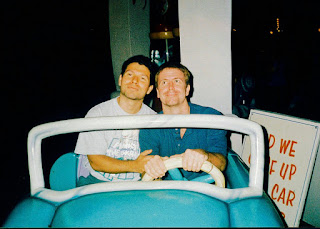 I know it was a few months because of the photos.  I don't even remember why we stopped seeing each other, but I do know it wasn't a huge dramatic break up...  But why didn't I consider this a significant romantic relationship  before this very moment, 20 years after not dating much, not having more than one other boyfriend and starting a blog called DieAloneWithME.Com??  Maybe Ed and I didn't see each other every day, or as often as Jim and I did over that year.  Maybe I was just an ungrateful piggy and didn't realize what I had.  Maybe it wasn't all that great...  Hmmm.
Anyway, no matter how I felt after not seeing Ed anymore, I've decided that Ed is my first significant romantic relationship.  ...Especially because he was my first OFFICIAL Valentine! 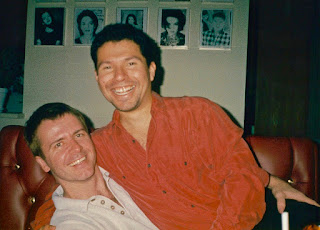 It's true!  He was the first guy to give me a Valentine's Day card and kiss me with full-on romantic notions behind it all.    I know that because he wrote it all in this; my first official
Valentine's Day Card. 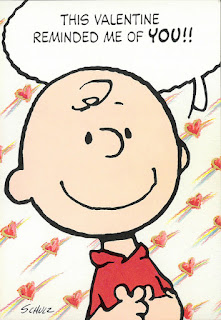 No, I shan't let you read the inside, it's personal. (Has that stopped me before?)
And if being my first Valentine wasn't enough, he took me to my first (AND ONLY) Celine Dion Concert!! 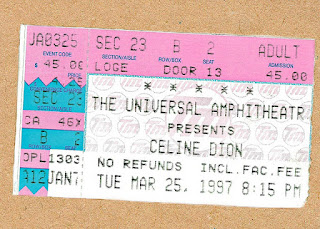 I know that sounds sarcastic, and I was dubious when he surprised me with the tickets, but I REALLY enjoyed that concert very much!

Obviously, my friends liked him, 'cause here we are enjoying a game night of sorts... 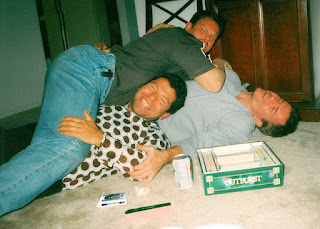 (Geoff Meed having a physical Outburst)

Hmmm... I don't think I wanna ponder too much on why we parted, I'll just enjoy this nice memory brought to me by the horrifically bad idea of de-cluttering my home.

And yes, these did spark joy...

P.S. Astute readers may notice that my top pic and my other pic with Jim are both birthday celebrations for me.  Skeptical readers might ask, "If you were together for only 13 months, how did you spend two birthdays together?"  Most readers wouldn't give a shit... but I'll explain anyway.  I had two celebrations one year.  Jim had a nice dinner for me at Off Vine, where he invited some of my closest friends and a few of his lovely friends I still love and enjoy.  The second was a surprise celebration my, then, roommate Kris threw for me at El Coyote with my, then, boyfriend, Jim and a bunch of his own friends (whom were all nice and fun...)  So I'm not lying about this stuff, no matter what the surface appearance my indicate.

...or wait... Did Jim and I start in September, with my birthday right away, then.. aw Crap!