Hello Christchurch!  This was the second stop on my 50th Birthday tour.  I will say that the moment I arrived, I was struck by the fresh and young feel of the city.  The airport is beautiful 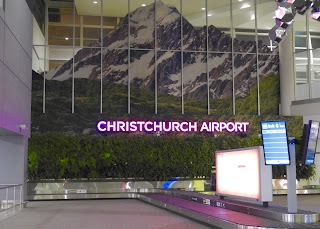 I loved the art 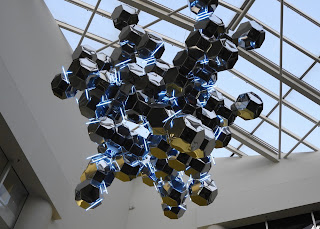 I liked my hotel, the BreakFree on Cashel 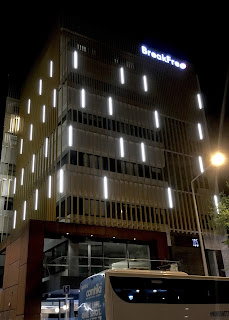 My room was totes adorbs, you guys 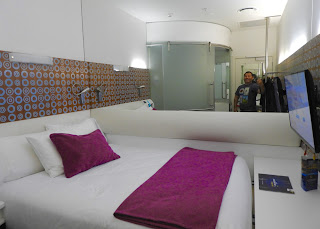 No nonsense and no useless extra space!
Even the terlet and shower shared real estate! 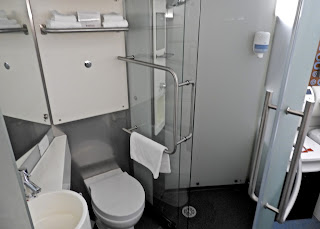 It was well into the evening when I arrived and there was not much to do, but wander around, taking photos of the nightlife and finding a nice little cozy place for dinner. I did not do that!  Instead, I skipped dinner and took advantage of the wifi availability searching out the local gay bars.  There were none.  Well, one, but it was regularly closed on this particular weeknight.  Only thing that was available to ease my gay aloneness was the Menfriends Spa.   For those of you new to this, it's basically a place where you, a gay man, walk around in a towel and if another fella in a towel finds you attractive and you find him attractive, you shake hands and excuse yourselves to an available sitting, standing, lying down space and go at it. "It " is up to you and your new friend.  Excited by the idea of having first choice from a plethora of hot mens who all find me attractive, I got directions and walked out of the hotel and made my way to the spa.  This was a scary walk.  The streets were completely empty and dark and I couldn't help but imagine that horrible moment that is in so many gay movies where the main character is attacked by a bunch of homophobic thugs, in a  70's era Mustang, 70's era Charger or 70's era Duster who just happen to be speeding by and notice the guy walking "gay like".  I decided to push that image out of my head and just walk purposefully as if I knew exactly where I was going.  I was not going to be gay bashed in Christchurch!! Or even just plain mugged.  I finally made it to my destination.  A dark building on a dark street... 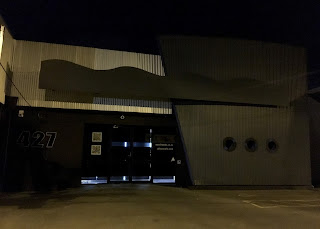 I wondered if the place was even open, but found the door unlocked and went in, totally pleased with the fact that I made it there without incident and with at least 3,000 steps on my fitbit!  As I was paying my entrance fee, I asked the guy behind the counter, "What are the chances of me making a Man Friend?" with a wink.  He replied, "I guess that's up to you."  I suppose I should have just asked "How many guys are in there?", but I just gotta be clever, don't I?

I walked in and it seemed like a nice, warm, clean, empty place... I doffed my clothes, tossed them in a locker and donned a towel.   As I turned to walk to the hot tub (I was at least gonna get a nice warm soak if nothing else, right?) there was finally a sign of life; an older fella who gave me a lusty smirk, I wasn't into him, but I was nice, just in case he was the the only one there and I had no choices, right?  Luckily, there was a young head in the hot tub. I took a quick shower, conveniently located 10 feet from the hot tub, and dropped into the steamy bubbles.  BINGO!  This guy was a real cutie, with a beard & tats and he was maybe a couple of years younger than me.  Now, if only I could tell if he thought I was attractive...  Not a few seconds later, he got out of the tub and went into the conveniently located steam room.  I'm no fool, I followed him.  Of course I was taking the risk of being embarrassed by following a guy who might be trying to get away from me, but I'm almost 50, for piss sakes, if I can't risk a little red face for sex, I should just leave.  It may have been a good plan, but the steam was so heavy in there, I couldn't see if he was checking me out or giving me a green light, or what!  The good thing was, he didn't leave.  I did.  I went back into the hot tub and he followed.  We smiled at each other and made intros.  Then, we shook hands...

We rolled around neked a lot, we did a lot of chatting, we explored the rooms.  We made a temporary home in the pitch dark "Orgy Room", which was just a room, since we were the only two in there.  It seemed we had the entire place to ourselves... and that older fella...  My Beardy Tatty friend was laying on top of me, we were alternating making out with chatting, when I realized that he was moving in an odd way... Turns out we had a visitor who, unbeknownst to me, had engaged my friend without saying a word.  I stayed put, because it seemed like something that wasn't going to take too long.  I was correct.  After our mystery guest left, we excused ourselves from the room and made our way to the showers, showered and moseyed on out to the heated "Garden Room" where my friend revealed he smoked!  Okay, I could tell he smoked, which is usually a deal breaker, but he was my only option and cute, so I stuck around.  We sat naked and chatted.  I told him I liked the "new" feel of Christchurch and he reminded me that the place was devastated by two major earthquakes in 2010 & 2011, killing hundreds and leveling a large part of the city.  He described how the earth shook up and down, rather than side to side or rolling, and how his he and his boyfriend were watching TV in bed, the quake hit, shaking up & down and his boyfriend bouncing out the 3rd floor window.  Well, there's a boner killer.  Actually,  we still fooled around a little after that.  All in all, we had a nice three hour visit.  Within that time, a few more fellas came and left, but we were having a good time with each other.

I was having such a good time, I knew I was in trouble when I thought I wanted to ask him to take a selfie with me as we exit.   The place was closing up, so I got dressed before he did, but found myself making little excuses to stay a little longer.  I even got my phone out and took a picture of the decor

I got a big kick out of this spoofy Han Solo in carbonite!  That's funny.  I didn't get the courage to ask him for a selfie.  I just lingered, while he dressed... "Oh, a glass dildo, interesting...", "What? They make these in plaid..?", "Goodness, that is large, where would that go... oh."  Since he was not emerging from the locker room, I accepted that he didn't want to go to Denny's after (Or the Christchurch equivalent) or even give me a ride back to my hotel through the dark and empty streets.  I walked, alone in the dark, singing to myself, looking purposeful and excited by the number of steps I must have been getting.  I had no reason to be worried, it all seemed perfectly safe (Although, I did tense up, when a car sped by, then slowed, then kept going).  I enjoyed the crisp night air and looked forward to the next day, my birthday!  Then I snapped this pic 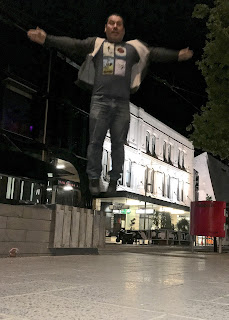 Happy that I was enjoying my time away, celebrating my birthday and the fact that I had just had SEX!
Posted by Danny in WeHo at 7:33 PM