Gay of A Certain Age - For the Record 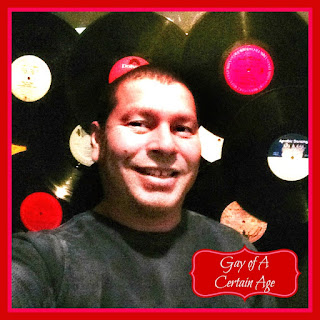 Say! I just found an essay I wrote a little while back about growing up and the music I listened to and I thought it might be fun for yous guys to read in a two-terlet-visit scenario!  It's a little long, but I think it says something very life changing and super important about the question of becoming gay because of our influences VS being attracted to certain things because we are already gay.  ...or maybe it's just a cute read...  You decide...

DREAMBOAT ANNIE AND INFLUENCE IN THE SPACE OF FORBIDDEN TERRITORY

When did I meet Lovely Rita Meter Maid? How did I get The News of the World?  Where did I learn to Bungle in the Jungle? Who introduced me to the music world as I know it?  Without holding one class, it was my older sister by six years, Grace who taught me what music is, rather, it was her unattended album collection that did.  I imagine it happened the same way with many other people; they entered the tuneful world of rock and roll when they sneaked into forbidden territory, their older sibling’s room, and played their albums at risk of death.  I confess that I was a young ditcher.  I used to skip school early in my educational career because I was bored.  I preferred to stay home and watch the soaps and get into Grace’s trove of auditory delight.  I learned all the words to all the songs on the Beatles’ red and blue double albums, I twirled like a drunk monkey to Fleetwood Mac’s Rumors and even dabbled in the world of Jethro Tull.  I felt super naughty when I sang, “It’s four o’clock in the morning, DAMMIT, listen to me good…” with Captain Fantastic.  I felt superior when I tied my mother down along with Freddie Mercury & Queen.  All of this happened before I entered the third grade.

I wonder what people with no older brother or sister do.  Where do they get that intense education from?  Their parents?  Hopefully, they have some young aunt or uncle who lets them hang out.  I don’t know how my sister clued in, it certainly wasn’t my parents. If that were the case, I’d be writing about Vikki Carr and Freddy Fender (both of whom I came to appreciate at a more mature age).  All I know is that she had great taste and fantastic dialing skills.  I was much too young to buy albums of my own and wouldn’t know what to buy.  My sister on the other hand, was old enough, but with a limited income.  She didn’t let a lack of cash stop her, though, she took to winning albums from radio stations across the city.  She knew how to work that random caller number mojo.  I remember not understanding why she was so upset when she won Queen’s A NIGHT AT THE OPERA, but instead was delivered the soundtrack to THANK GOD IT’S FRIDAY because they had run out of Queen albums.  All I did know was that I had a double album to listen to that wouldn’t get me in trouble.  I learned all the songs on that soundtrack and didn’t even see the movie ‘til ten years later on Showtime; it wasn’t good.  Because of my keen sense of observation, a little later, I came to understand the difference between the brilliance of Freddie Mercury and the crap that was “Trapped in a Stairway” by Paul Jabara.  That’s not to say that I don’t enjoy breaking into a crap song, disco or not.  Therein lies a conundrum, why could I tolerate disco, even though it wasn’t on my sister’s curriculum?  Where did I learn that?

How could my sister’s fine taste have rubbed off on me, but I still liked disco?  That brings me to my queer query.  Right behind my sister was my older brother, Benny Jr., he was only one year younger than her and had albums of his own.  Why didn’t I gravitate towards his 33LPs?  They were just as available as Grace’s when I had the house to myself while they were at school.  Was it because I faced a penalty worse than death; a PAINFUL death, if I was caught?  I don’t think so.  I was very careful about not getting caught; everything back the way it was, no fingerprints and the volume knob exactly at the right setting.  Even though I was cautious, I could not plan for everything, like the one time my cousin Tony framed me for a misfiled Twisted Sister album.   I didn’t see that one coming, but I did see my brother coming at me angrily.  Despite that beating, I don’t think that answers why I was not drawn to his Ted Nugent, Black Sabbath, Van Halen and Scorpions the way I was attracted to Grace’s Carpenters, Billy Joel, Elton John and Steely Dan.  Was this a clue that I had “different sensibilities” than my male heterosexual brother?  More sensitive “sensibilities”? Was this a clue that I was gay?

When I bought my first album with my own money, as a youngster, it was CHIPMUNK PUNK.  I found it age appropriate and satisfying because it was cute versions of the songs I already knew!  Then came MTV to further shape my musical mind.  As I aged, I still leaned towards my sister’s tastes with Heart, Pat Benatar, the B-52’s and , while I was familiar with my brother’s Ratt, Quiet Riot, Ozzy Osborne and Judas Priest by association.  Then I started going in my own direction, discovering groups before Grace did, or didn’t even care to follow like Devo, Men at Work, The Cure and Duran Duran.  Later, I glommed onto Elvis Costello, World Party, INXS and Depeche Mode all on my own.  Now that I look back and see where my musical tastes originated, I also see
that some equally present brotherly influences were simply spurned, which makes me wonder if my sexual orientation steered me in one direction more than the other. I know some factions would suggest that my sexuality was shaped by the musical influence, like I wouldn’t be gay if I had listened to more Iron Maiden and less Linda Ronstadt. I’m certain that’s not true. Whatever the answer, I am definitely sure that while, just like the white winged dove I like to sing a song... I can still rock you like a hurricane! I am so grateful to my older siblings for their unintentional influence and tutorage, even at a cost of a punch per scratch and a kick per skip.
…but I still wonder where the hell I got the penchant for show tunes!

A family portrait with Mom, Isabel Grace, Grandma, Julie, me and Ben- with our tastes spelled out... 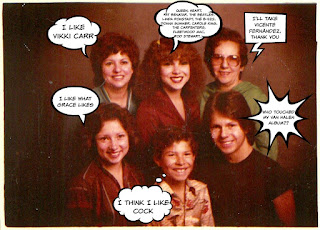