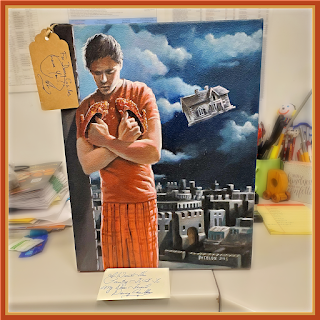 I was hired by The City of West Hollywood in July of 1999
My office surroundings were quite nice,
and I had great cubical real estate.
Just, look at all the space I had to fill with
fun photos and colorful plastic crap! 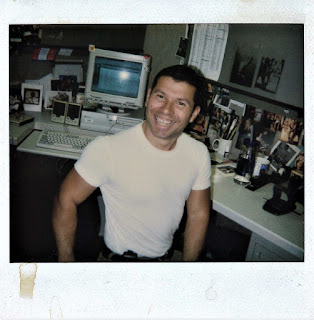 Along with my spacious accommodations
were three more pods
that housed my fellow co-workers, with whom I got along famously!
...Especially, Katy. 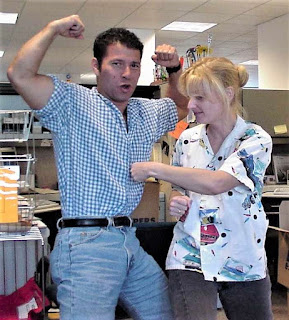 Katy had the pod right next to mine
and we didn't have to go far to share a laugh,
a knowing glance
or the occasional air punch.
...And when Katy got tired of me,
she could stack boxes of parking permit applications we were processing
to make a wall between our pods and declare
that I had been "Voted off the island".
Across the room from us were
Mattey & Winnie.
I gave them those nick-names because they had the same first name
and this was a cute, easy way to let them know which one I was addressing.
It caught on and soon the entire office was using the nick names.
The four of us were Admin Central for the department
and our meetings usually took place with us
surrounding the two short filing cabinets in the middle of the room,
getting business done and then laughing.
My Friend, Brett had developed a certain work code
which I adopted that is, simply stated,
"Friendly, not friends".
It's a simple rule that helps keep a healthy distance
and boundary with people you see every day,
but don't need to share your most personal information
or private time with.
It just keeps it clean.
That rule went out the window with this group,
mostly with Katy.
The four of us would share personal information
that one generally doesn't share with co-workers
about personal lives and histories.
We had a trust and a kinship.
We even spent personal hours with each other from time to time.
Most notable were the times that Mattey would invite us out to dinner,
or made dinner for us. 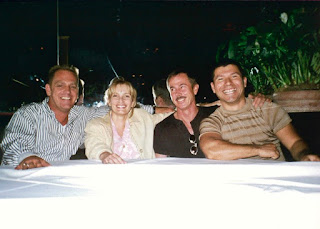 Mattey was the eldest of the crew
and quite the social butterfly.
He was the most inquisitive of us
and quite generous.
He had a blog called
Dreams of Forest Lodge,
in which he recalled wonderful stories
of his fabulous life.
Sometimes it was hilarious, other times it was tragic, or scandalous,
or just plain touching.
Before he had the blog,
he would write them and print them out,
or send as an email weekly.
...His diary of a life REALLY lived.
His recollection of people,
some quite historic,
and the way they touched his life was amazing.
I enjoyed and admired how much Mattey was willing to share
and give.
As is apt to happen, even though there was no Yoko Ono,
our little band broke up.
Katy moved away,
Winnie changed positions,
I was transferred to another department
and Mattey got to stay in his wonderful
window seat, doing the same job.
I think it's apropos that a big part of Mattey's job
was reading peoples' stories
and determining whether their citation contestation
merited a hearing.
Cut to the year of Covid-19,
at this point,
Katy is still away
and both Winnie & Mattey have retired.
Mattey continued his blog from his home in Palm Springs
with stories of dinners with friends,
family memories
and the ducks on the lake.
Christmas 2020 I got 2 Christmas cards from him...
He was usually my first Christmas Card in the mail every year
and it was always a handmade affair 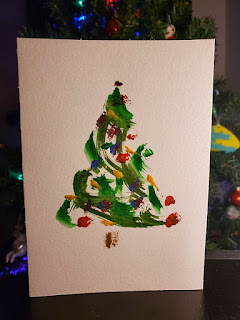 And a few weeks later, I got a second one,
containing a photo of a fun time with friends of the past.
Then in February of 2021
came news that Mattey had passed away.
Then, some time later,
I learned that he,
as so sensitively put by Evie Harris in GIRLS WILL BE GIRLS,
"passed himself away".
When that news was breaking,
and when it was broken to me,
folks were saying to brace myself because it was a sad story.
As I was told,
he passed himself away on Valentine's Day
leaving notes for family & friends
explaining why he was doing what he did.
As I understand, his health was failing
and he didn't want to be a burden,
or go through an unbearable decline
and have his fabulous life
end in such a bummer way.
(That's as I understood it)
I didn't find it sad, beyond the declining health issue.
As one could determine from the name of my blog,
this is something I think about from time to time.
Dying alone.
But this is not a case of a man feeling so alone he
chose to leave because he had no one.
This is the story of a man
who led a wonderous, full life
having say in how that all ends.
He had friends all around and love.
He wasn't lonely.
Choosing Valentine's Day
was a very different and unexpected
way to express love for those he left behind (unburdened)
and himself.
When I was young,
I always thought,
"I'd never kill myself!"
I couldn't imagine that I'd ever feel so alone
that I'd feel I had no one to turn to.
Over the years I've learned that suicide isn't just about loneliness
or depression.
Just like anything,
there are many reasons people may choose to end their lives.
I don't think ANY reason makes it easier for those left behind,
but it does help when one understands why.
Now, this doesn't mean I'm putting suicide on my bucket list,
but I understand this one.
Mattey left notes, not just A note,
but several to loved ones and friends.
When I heard about the notes,
I couldn't help but have a little pang of
"Aww, I didn't get a note."
That didn't make me feel any less important to Mattey,
I am secure in our friendship,
no more than it actually was,
or any less.
A few months later,
a retired co-worker and fellow friend,
Michelle,
stopped by the office to drop off something Mattey
had left for me.
I didn't know what it would be,
but my heart sparked with warmth
with the knowledge that Mattey
had left me a note, after all.
Mattey left for me
this painting 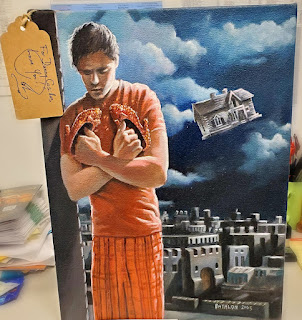 HOME AGAIN, HOME AGAIN
Davidd Batalon
Oil on Canvas
2005
It's a painting Mattey bought,
supporting the artist,
as he would do,
and left to me, playing on my appreciation of art
and supporting artists
(as he did, coming to my shows in the basement
theater at Casita Del Campo, as well as
the few shows in Palm Springs)
The painting holds so much meaning for me,
especially because it came from Mattey,
but the one meaning I will share with you is this:
The man in the painting has his ruby red slippers in his hands,
and as we know from THE WIZARD OF OZ,
if he wants to go home, he just needs to put the slippers on and click his heels 3 times:
He may not be where his wants to be,
but he holds the power to go home any time he wants.
Mattey, you clicked your colorful heels for the last time
and now you're where you want to be.
Thank you for the gift, the inspiration and the love.
Posted by Danny in WeHo at 12:30 PM