Gay of A Certain Age - Everybody's Talking About Danny 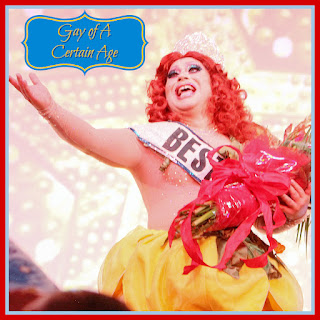 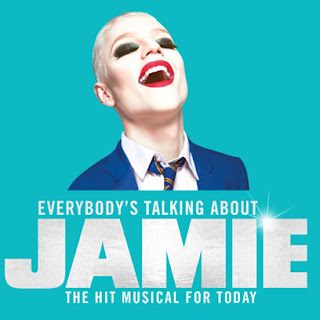 I just wartched the
EVERYBODY'S TALKING ABOUT JAMIE
on the Amazon Prime.
It's a movie version of the West End hit stage musical
of the same name.
First, I enjoyed it very much.
It was interesting to me that,
when I was growing up
the gay movies were all about the torture of being gay
and finally coming out.
...that and everygay dying of the AIDS.
Now, the kids these days get to see
the gay kids openly gay, but still dealing with the same stuff
or a slightly different version  of it.
In this story,
the openly gay kid
must deal with the trauma of wanting to be a drag queen.
I'm pleased that there is mention of the generations of previous gays
whose struggles make it easier for today's young gays
to be open and out.
As a matter of fact,
Richard E. Grant,
was my favorite actor/character in the movie.
Anywho,
while the main character,
I think his name is, Jaime,
is having the familiar struggles with his father,
it's refreshing to see him have a very loving and supportive mother,
who accepts her son for who he is
and encourages him to be who he wants to be.
She even buys him a pair of  glittery red heels to do it in!
This is realistic,
because it is totally based on a real mother and son.
Lovely!
It's also realistic because I have my own very own
loving and supportive mother.
I'll call her "Patty",
because her name is Patricia. 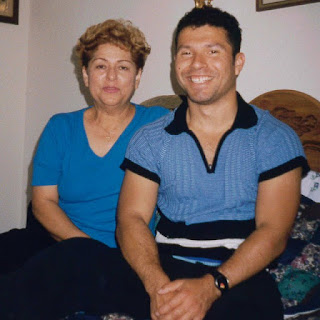 Of course, because it is a theatrical story
and there needs to be crisis to overcome,
Jamie has a moment when he gets very angry with his mother
and says some very awful things to her.
...Even though she bought him some lovely shoes!
I think back to my time with my Ma,
and while I'm sure there were many times that
I took her for granted,
was snotty to her,
or just didn't appreciate
how difficult it must have been to raise four kids on her own,
sometimes working two jobs
and not having much time for herself,
I NEVER said anything intentionally hurtful to her!
It was at this point
that I decided I hated Jamie.
Of course, as they do,
things worked out and Jamie
finally appreciated how lucky he was to have the mother that he does
and they share a wonderful moment
when he finally gets to be a drag queen,
The End!
This reminded me of my mom and me.
Even though it wasn't my life long dream to be a drag queen,
I have always known I wanted to be a performer
and be on stage.
I am fortunate to have performed
on stage
in front of an audience
every year, since I was in high school.
(For 18 years, it's happen to be mostly in drag)
There are many times when my mother could not make it to my performances
in high school & college.
I am happy to say that she has been to L.A.
and seen me in CHICO'S ANGELS
a few times,
but the moment the Jamie movie reminded me of most
was at the
Best In Drag Show 2018!
It was a fundraiser for
Alliance For Housing and Healing, as well as for Aid for AIDS.

It was a pageant
that we prepared for for 6 months
had very little rehearsal
and went up in a huge theatre
(The gorgeous Orpheum)
full of over 2,000 people.
It was very exciting.
Here's a picture of me
for my talent portion
with my talent partner Duke.
I chose this picture because it is colorful, fun
and Duke is shirtless. 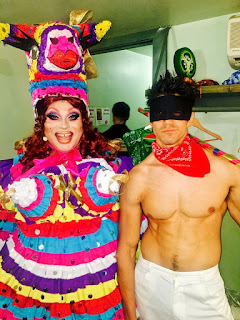 Anyway,
the show went very well
and I had a lot of support from the audience,
so my Ma got to experience some applause and hooting for her son
throughout the night.
Luckily, I won!
It was a grand experience,
to be sure,
but the best part was seeing how
happy and proud my Ma was. 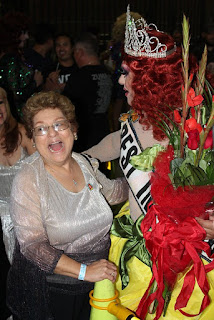 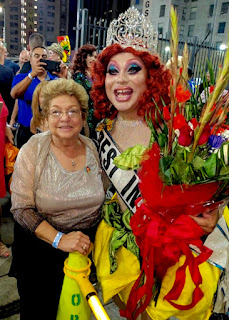 I'm pretty sure she wasn't so excited just because I was in drag,
it was because,
while she was working so hard to support her kids
and I was spending my time in school plays
and drama tournaments,
then, majoring in theatre in college,
instead of something "more practical",
she got to experience the excitement and energy
of a huge theatre full of people
cheering her son on,
and enjoying the silly things he was doing on stage
in a dress
(6 dresses actually).
And to top it off,
her son helped to raise over half a million dollars
for worthy causes.
That's something to be proud of! 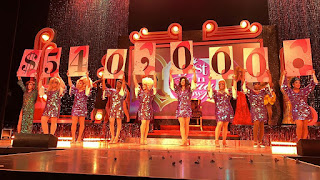 So, as if winning the pageant
wasn't enough of a spiritual boost,
seeing that smile on my Ma's face
showed me I hadn't wasted my time
in high school & college.
(I'm taking this very moment to apologize to my Ma,
who for some reason, made it to see me in
the worst production, high school or otherwise,
of  MAN OF LA MANCHA.
It was just AWFUL and I cry when I think she spent all day at work,
then, probably skipped dinner,
to get to the high school auditorium in time.
I only hope she slept through it.)
So, congratulations to the real life Jamie!
As a Gay of A Certain Age, I know how important
and fortunate it is to have a wonderful,
loving and supportive mother!
My Ma came to visit recently,
and we shared a wonderful drag moment
by having a fabulous impromptu Kaftan fashion shoot
by the pool. 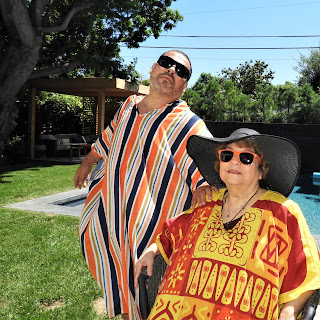 "It's Called Fashion Look It Up"
Apparently the fruit doesn't fall far from the tree!
If you want to know more about my
BEST IN DRAG SHOW journey,
you can read about it
HERE
Posted by Danny in WeHo at 6:30 PM