Am I Really Alone - No Bag! 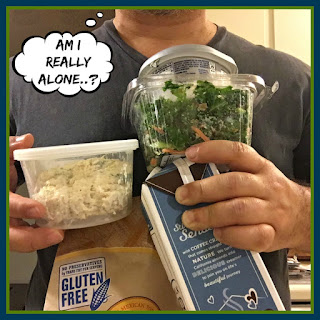 If you live or spend much time in West Hollywood, you might see a person walking down the street on their way home from the Gelson's grocery store.  If you do, you might ask yourself, "Who's that idiot trying to juggle corn chips, almond milk creamer, Jessica's Crispy Kale Salad and a half container of tuna salad?  Boy, that Comedy Store sure is desperate for acts..."

That idiot would be me, quite often.  If I am not eating out, as I do often, I will grab dinner fixin's on the way home.  When I buy groceries, I never buy more than I can carry because I do not want to use a bag.  I am trying to save the planet here, people! Since the bag ban went into effect in West Hollywood back in 2013, I've been practicing this method of planet saving everywhere I go... even where it is un-required.  Once in a while I've been caught unprepared and have had to use a store bag (Target! Who walks in there and doesn't leave with $100 more merchandise than they intended?), but I stand firm- I'm doing it for EVERYONE!

Nothing kills my insides more than what happened the other night.  As I'm leaving the payment counter, I strategically gather my goods in my arms and as I start walking away, I hear the asshole behind me say "Double bags, please..."  JESUS CHRISTMAS!  DOUBLE BAGS????  Not only is he opting to kill the planet, he's totally negated my effort by taking that bag I didn't use!

Am I really alone in this?  Does no one else care about the planet?  And why would someone do something as evil as double bagging?  Why do people resist doing what's right for the place we live?
A few months ago, I was in line behind this woman who snottily exclaimed, "Ten cents?  I don't have to pay ten cents for a bag in Texas.." To which I replied (under my breath), "yeah, you don't have the right to an abortion in Texas, either." Ten cents is an ineffective disincentive.

Come on people! Don't leave me alone in this!  Take a reusable bag with you to the store!
Posted by Danny in WeHo at 12:30 PM