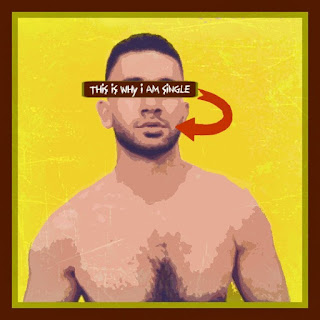 So, this hottie hit me up, I fought against my insecurities and allowed myself to believe that it was for real, which turned out nicely.  Then, just when I thought we might take another step in a new journey for me, I hear from him that That Man who is currently our president and his travel ban kept the hottie in Mexico and out of reach.  Now, here's the next, but not uncommon, reason that I am single.
Three days after I sent a message asking where and how he is, he replies to me by telling me that he was joking about it all.  Haha, great joke. (That's sarcasm).  What would possess him to lie like that, except to have an unalterable reason to not get together again?

I was preparing to have the kids over for Craft Night 2017 in just a few hours when I got his message revealing his joke (A WHOLE FUCKING WEEK LATER) and I didn't have time to deal with drama so I simply responded that I was having friends over and invited him to join.  It's a week later and I still haven't heard a "Sounds fun," "No, thanks" or even a "Fuck off" from him.  I truly do not get this behavior.   Come on to me hot & heavy, tell me how much you like me and then step away.  What is that?  I can blame myself for allowing my protective wall down. I can assume that I was correct in my insecurity and he was disappointed by me, either physically or personality-wise.  I can choose to say, "Never again,"  but I choose the "Fuck Him", option.  Even though there's a little part of me that thinks, "Maybe it's a misunderstanding.  He's being cute and playful.  Maybe that's how the young guys are now, all off & on..." I will be strong and not go back.   I can be strong because I know that even if those little excuses were true, that's not what I want.  I really liked that he decided that he liked me and took a chance to contact me.  I liked that he actually showed up.  I liked that we seemed to get along well.  Certainly, I liked that he was a hottie.  I liked how I felt after he left.  I really didn't like that follow through.  I want a man who backs up what he says and does.  If he decided that he didn't like me enough to continue seeing me, he should have said that.  If he liked me enough to only see me once in a while, he should have said that (Lord, knows I don't have anything else going on...)  Unfortunately, now, even if he wanted anything like that, I couldn't possibly say "yes", even though under different  circumstances  I would totally be up for it, because now there is a major trust issue.  I can't trust him and that is not what I want.  Above hottie-ness, I want trust.

This Is Why I Am Single; I won't sacrifice trust.
Posted by Danny in WeHo at 12:58 PM

Email ThisBlogThis!Share to TwitterShare to FacebookShare to Pinterest
Labels: Craft Night, hot guys, This is why I am Single, trust