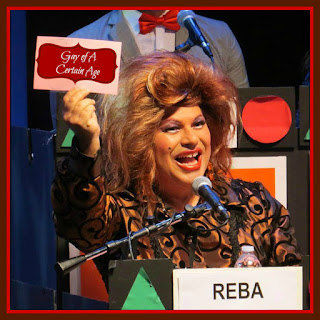 Should I be worried?  Remember how I said I was going to be doing the Mismatch Game a few weeks ago? I posted about it all over the social medias!  July 23, 7:00 PM..?

I posted this everywhere Sunday morning... 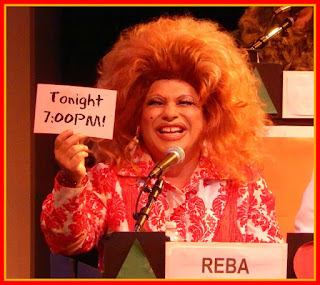 Then, sometime in the afternoon, feeling kind of sleepy, (exhausted from hiding from the sun in my dark apartment all day, I suppose)  I decided I would take a nap at about 5:30 to 5:45/5:50.  That way I could get in the shower at 6:00, leave at 6:30 and be at the theater with an hour to get ready. It was a great plan to be sure!  It wasn't until I arrived, unexpectedly finding no parking that I thought, "Why isn't there any parking? I'm here an hour..."  Then I got that feeling, you know, like my stomach flipped and someone punched me in the chest.  I was there with only ten minutes to show!  I drove around the block in a rush, parked in front of the LGBTMNLOP Center at a space marked, "No Parking Anytime.  Tow Away", knowing that it was Sunday, hoping it wouldn't be enforced.  I grabbed all my crap, including make-up, costume, wig and props.  In a tizzy, I frantically banged on the door closest to the theater entrance.  I stumbled in a heated rush in front of everyone in line, waiting to get in.  I scrambled into the dressing room shouting, "Who's on time, if the show is in an hour?"  I apologized to the rest of the cast and Dennis ( Who must have been very stressed out, what with one of his panelists nowhere in sight a few minutes before curtain without so much as a reassuring call or text...) I threw my crap on the dressing table and floor and did a quick character prioritization in my head; what is most important?  I actually ended up getting in character completely backwards; I put on my dress, checked for time;  Put on lipstick, checked for time; Put on eye lashes, checked for time; Put on eye shadow, checked for time; Put on blush, checked for time; put on base make-up around blush, lips and eyes, checked for time; put on eye liner and mole. IT WAS TIME!  I managed to get some version of Reba together, slapped on my wig and headed for the stage.  It really got my juices flowing! Fortunately, I did well on stage and fun was had by all.

I'll tell you, so many things were going on in my head as I swirled into make-up... I was regretting being late and worrying Dennis, hoping he wasn't too angry with me.  I couldn't ask them to hold the curtain for me because it was all my fault: I didn't have the luxury of worrying about how I'd look; my ego had to take a backseat to my sense what was right.  I kept thinking of ways to explain my appearance on stage, if I ended up going on in just a dress and wig, no make-up.  If necessary, I thought I would explain that Paris Hilton had used my eyeliner without permission, then when I used it my entire face stared burning, so I had to go without make-up for a few days.  Luckily, I looked enough like my character that no explanation was needed.  I have to credit that to a fortitude I didn't know I had.  It never occurred to me to give up and not try to get into make up and sit the show out, or delay the show for my regular get ready time (about 40 minutes).  All I could think was to get as much done as I could in the time I had and get out there.  The top picture is me in the show, not bad looking.  If you look closer you can see how jacked up the stuff really is, but it all worked out.

What worries me is that, as a Gay of A Certain Age, I have no idea why I forgot the show was at 7:00 and not 8:00!  Did I have a "senior moment"?  Am I losing my beads? ( I wasn't much into marbles as a kid)  All I know for certain is, it's a good thing I didn't realize how late I was until I was there and looking for parking (by the way, my car was not towed or even cited!), because if it had been earlier, I might have driven like an idiot rushing to get to the theater on the crazy-busy Santa Monica Boulevard.  Who knows what trouble I would have caused, then? 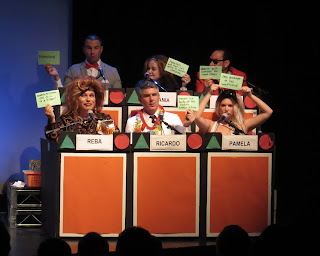 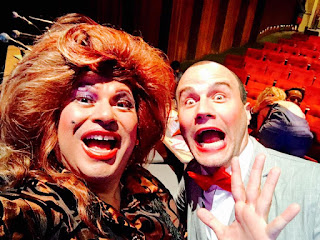 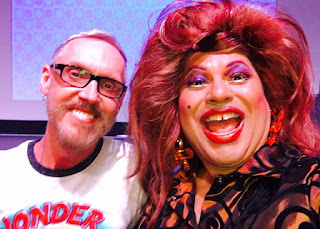 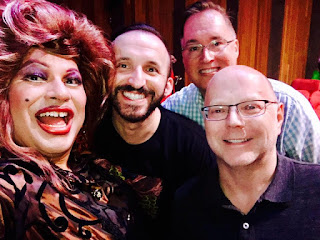 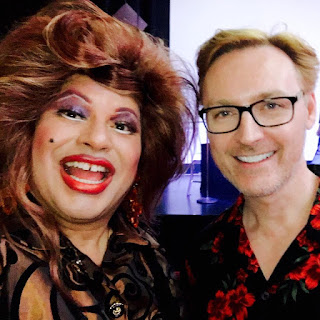 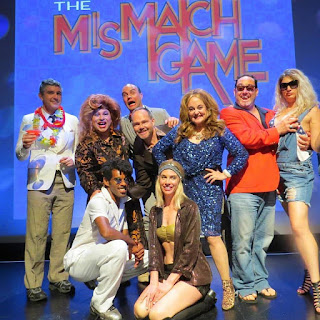 P.S.  The cast was very forgiving and no one said a word in rebuke. ...but I think I did see Julie Brown give me a look as if to say, "he's not even gonna put on those pantyhose?"  She's sweet!