This Is Why I Am Single - My Alleged Father Part 4 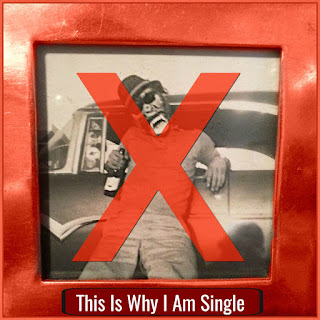 I'll tell you, Facebook must be one of the worst inventions to ever be inflicted on the human race.  One of the worst things about it is that once parents catch on to the thing, they wanna "friend" their children.  The children, of course, are mortified because this is the moment they have to either take the risk of offending their parents with a "No, thank you" or actually changing and living their life in a way that their parents would approve.  I fall somewhere in the middle of that.  When I got a request from my mother, whom I love very much, I flinched.  Then, I thought about my Facebook life; I try to be a good person, have a positive attitude and and only occasionally burst into fits of rage that result in a post.  Then, there's the whole gay aspect; not that I'm ashamed of being gay or living a "gay lifestyle" or having drag be a huge part of my actor life, it's those Gay friends who sometimes post naughty things on pages... But heck, I think my ma knows she's taking that risk. I happily hit "Accept" on that friend request.  Then on the other side, I got a request from my alleged father.  We don't communicate much, but I was game.  I popped on over to his page to see what I would be getting into.  I found that he likes to post A LOT!  Sometimes he posts in all caps and sometimes more that 10 things in an hour.  The stuff he posts is usually religious or very political.  I thought, "No, thanks!  I don't need to see that popping up on my news feed 10 times each hour!"  So, I let that request sit there, I didn't deny it, I just let it sit.  I figured that all my settings are set to "public" so anyone can see what I post, therefore he access to my stuff, and I have access to his without the formal "accept" that would put all that stuff on my news feed. It works!  ...And, to be honest, a little part of me got some satisfaction from withholding from him as "revenge" for his absence in the past.

A thing about the Facebook in the last year or so; our political climate has become so polarizing and, in my opinion, dangerous that with so many exaggerated  forces pulling people to either side, it's easy to fall prey to crap that re-enforces one's view and pass it on.  I get it.  Sometimes, it feels irresponsible to NOT post something political.  Personally, my anti-Cheetohead posts consist of his picture stamped "Not My President" and "Fake President" to clearly state my stance and all other stuff I post or re-post I take from reliable news sources or clearly opinion-based pieces.  (Unless it's something REALLY funny or clever... then I might give in to temptation)  Otherwise, my posts are the usual show notifications, puppies, Dunnys and shirtless hot mens.  I have family members who occasionally post something that is in direct opposition to my views, but I've never felt personally attacked.  That was until yesterday, when I saw this posted on my alleged father's wall... 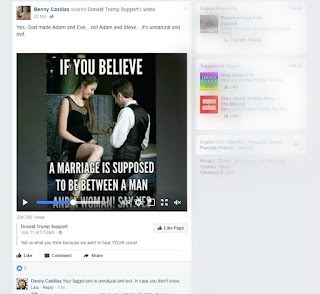 Not only is the meme, itself, anti-gay, he took the time to add "it's unnatural and evil".
If you click on the pic, you can see at the bottom where I immediately commented, "Your faggot son is unnatural and evil..."   SERIOUSLY?  I don't think I've ever heard a parent refer to their own child as evil, but here it is, proudly posted on his wall for all to see.  After I commented, I blocked him and deleted the friend request.  I mean, really!   What really bugs the fuck out of me is that this man, who seemed to have no problem that I, as a preschooler, knew of his mistress, Minerva, and knew that she was his side cooze;  Who had no qualms introducing me, a grade-schooler, to his illegitimate daughter, Myra, whom he fathered while still married to my mother;  Who had no problem living with Minerva or moving to California while still married to my mother and leaving her to raise four of his who-knows-how-many of his children by herself;  Who seemed quite comfortable barging in and crashing with us in between his bouts of employment (proudly displaying his Benny and the Amazing Technicolor Dream Boot collection along the wall, but not putting in for groceries);  Who had no issues, paying the Church to annul his marriage to my mother so that he may marry another woman in the Church. (So am I a bastard in the eyes of the Church since my parent's marriage never existed?); Who ( I honestly don't know how he took that other wreck of a marraige) racked up a second divorce:  After all that; infidelity, children out of wedlock, and two divorces, he is going to preach about the sanctity of marriage AND tell me I'm evil and unnatural?  Fuck that!

You know, it took me a long time to sort all of that stuff out in my head and heart to not hate the man.  I worked hard to try to see things from his side and thought, "He's just a guy whose dreams were too big for his circumstances..."  People make mistakes...  I let it go.  Until now.

I may be playing up the drama, I am a thespian (also unnatural & evil), after all...
It's not such a bold move that I've made here.  If I had forgiven and forgotten all that, I also never felt like I needed his approval or attention, frankly.  I'm just saying, that if you request your son's friendship on the Facebook, you may not wanna call him Unnatural and Evil.

This Is Why I Am Single; My alleged Father believes that I should not have the right to be married.
Posted by Danny in WeHo at 10:50 AM

Email ThisBlogThis!Share to TwitterShare to FacebookShare to Pinterest
Labels: alleged father, evil, Facebook, Politics, religion, This is why I am Single