This Is Why I Am Single - REPULSION - A Guest Column

Muh DAB, Glenn Gaylord has something to say... 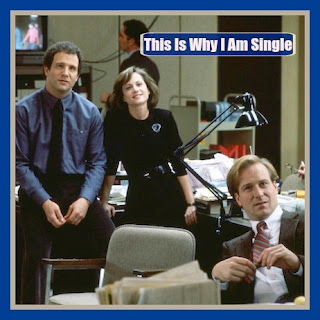 “I have passed some line, some place. I am beginning to repel people I'm trying to seduce.”
Jane Craig (Holly Hunter) in BROADCAST NEWS

I’ve always been able to relate to the Jane Craigs of the world.  An outward firecracker who, when nobody’s watching, sits alone at home and cries.  I even admired how she would schedule her sob sessions, ending them abruptly with a little tug at the tissue dispenser.  When her boss told her, “It must be nice to always believe you know better, to always think you're the smartest person in the room,” Jane famously responded, “No, it’s awful”.  The smart lonely heart.  Jane was my role model, “except for socially” as Joan Cusack hilariously told her.

As for my love life, it’s been fairly non-existent.  People always tell me to stop looking and that it will come when I least expect it.  That strategy has never worked for me.  If I don’t make a first move, nothing moves.  I’ve never been the person who gets those calls from their friends that go something like, “So and so really likes you and asked me if you were single”.  If I go out, I never get hit on, and in the past couple of months I’ve been in 3 situations where I was surrounded by thousands of gay men, and I’ve never felt more invisible.  Sure, some of it is a product of my advancing age, but this was even true when I was a twink.  Some of it has to do with the fact that I’m terrible at “performing” for people.  I rarely say “Hey gurrrllll” and I don’t speak “DJ”.  I’ve never been very good at hiding my emotions.  If I’m having a good time, you’ll know it, and the opposite is even more apparent.  Still, I think I’m pretty witty, funny, have a great sense of adventure, career accomplishments, a loving family, and a genuine love of connecting with people.

All of this is to say that I must have the worst resting bitch face on the planet, because, like my pal Jane, I’m starting to repel the people I’m trying to seduce. Yep, it’s happening.  I meet guys in all sorts of ways:  dating sites, apps (of all stripes), out and about, parties, museums, movie screenings, through friends, all of it.  Recently, I was out for a drink with a friend and ran into a delightful guy I know through work.  He was out with two of his friends, one with whom I felt an instant spark.  Not one to let life pass me by, I asked my friend if his pal was single.  He confirmed it, but also warned me that he has issues and I should steer clear.  The friend I was out with said I should just take a chance.  If there was a spark, why not explore it?

So I did what any self-respecting fool would do and hit him up on Facebook.  Direct as usual, I told him it was great to meet him and asked if there was a spark.  He complimented me, used the “F” word (flattered…ugh!) and then continued by telling me that he has been with someone for the past 2 years and was very happy.

When I took this info back to our mutual friend, he was surprised.  In fact, he said there was no way he was seeing someone.  Yep, things have gotten so bad that guys are now pretending to have boyfriends to avoid going out with me.

A few weeks back, I met another guy at a party.  He had just moved to LA and, again, sparks.  Or so I thought.  We eventually exchanged numbers and met out for drinks.  You know those dates where the conversation flows so easily that hours go by without you knowing it?  It was one of those.  All of my past relationships started with such an epic running time of a first date, but, of course, the hammer came down.  It started out innocently enough.  He told me he hated living in his prior town because every guy he’d meet would tell him, “I’m not really looking to date”.  He said it was sucking his soul dry.  Wait a minute, that’s MY hashtag!  #MYDRYSOULISDEADINSIDE.  This sounded promising.  A like mind.  A guy who has grown tired of meeting unavailable men.

And then this little nugget came out of his mouth, “And now, I’m that guy!  I’m not really looking to date”.  The proverbial air went out of the tires.  My inner voice raged, “THEN WHY ARE WE SITTING HERE?!!!!”  My outer voice just went, “Oh.  Cool.”  Oh, Cool?  There’s nothing cool about it.  It’s terrible!  It’s a tragedy!  On one hand you have everybody screaming about marriage equality rights, on the other,  NOBODY WANTS TO DATE!  Cupid, why hast thou forsaken me??!!!

OR….maybe you need to write an article with the hope that a like mind will read this and will be the one to ask your friends about you!  Someone?  Anyone?  Is this thing on?
Posted by Danny in WeHo at 11:54 AM

Email ThisBlogThis!Share to TwitterShare to FacebookShare to Pinterest
Labels: BROADCAST NEWS, dating, Glenn Gaylord, guest, This is why I am Single