Gay of A Certain Age - The Big Five Oh! - Melbourne 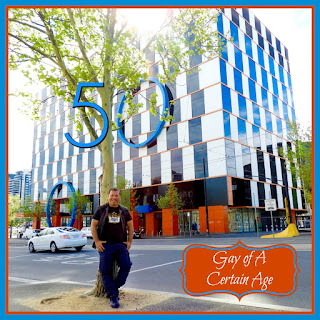 To continue with the final leg of my journey, I arrived in Melbourne ready to meet up with Facebook Pal and Words With Friends adversary, Dan James.  I had scarcely checked into my lovely hotel room at the Ibis Styles The Victoria Hotel 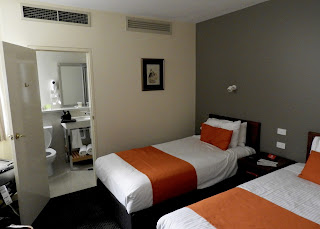 when I got a text message from Dan making lunch plans.  I was good to go and we headed over to what could be the biggest mistake of my trip.  We tried a place that sounded odd to me, HUXTABURGER. Yes, A COSBY SHOW-inspired burger joint.  He asked if I was interested, and I said, "As long as I don't feel sleepy afterward, I'm game!"  We checked that there were glutey-free buns available and made our way over. 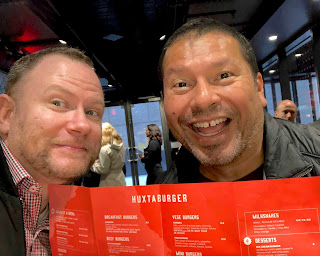 The place was abuzz with lunchtime commotion  and we quickly moved through the line.  I enthusiastically perused the fairly large selection and chose the THEO - a Double grass-fed beef patty, double cheese, bacon, bbq sauce, mustard, mayo, tomato, lettuce, pickles loaded burger with fries.  Dan ordered his and before I could make a move for my wad, he had paid for both our meals.  We played catch up near the ketchup as we waited for our order, telling each other about our latest adventures and my trip in progress.  They called us up to pick our order and I had a minor freak out in my head.  I noticed that, in all the excitement, I forgot to order a glutey-free bun.  I mentioned it to Dan and he said we should fix it, but he had already paid for lunch, he was on his lunch hour, the place was all abuzz with Aussies waiting for their Claires, Sondras, Denises, Theos, Vanessas  or Rudys, so I figuered I'd just suck it up.  After all, I'm Glutey-free by choice, not necessity and I'm sure I've unknowingly been exposed to gluten the past couple of years and been okay.

We enjoyed our tasty burgers, made plans for the evening and headed our separate ways; Dan back to work, me out for some site-seeing.  I was not far from Federation Square, so I headed there 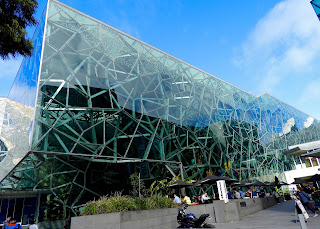 and enjoyed the buildings all around me 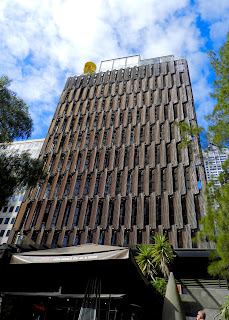 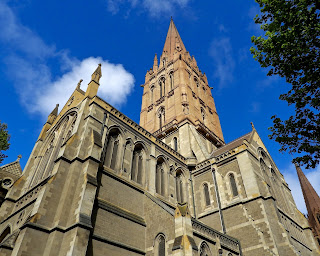 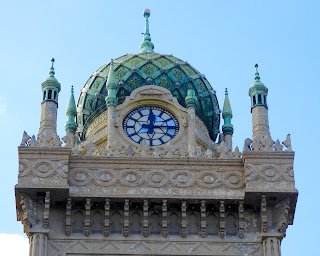 I had a little photo session by the Yarra River 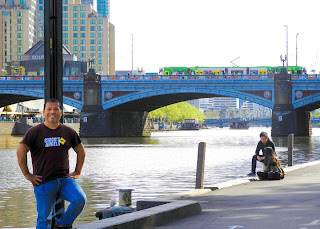 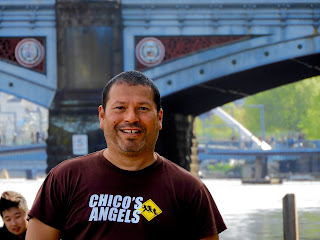 and enjoyed the sites along the Yarra River. 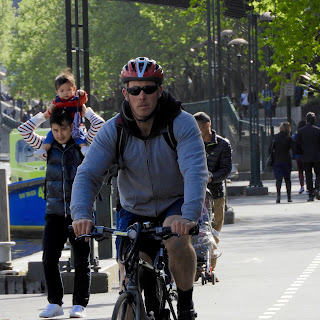 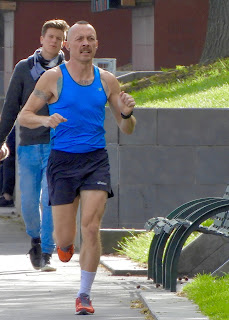 Then, I felt a little rumbling in muh tumtums...
I thought perhaps I would return to my hotel and see how things were in the terlet room.

It would seem that the ingestion on the gluteyful burger bun had indeed affected me.  It was as if muh tumtums was having a liquidation sale and EVERYTHING MUST GO!  I spent an awful long time on that terlet, playing Candy Crush Soda and feeling hungover, even though I hadn't had an ounce of alcohol.  I took rest breaks from the restroom over next four hours, or so, hoping to have everything back in order by the time Dan showed up for our evening out.

I was a little out of it and was gathering my wits when I noticed a message from Dan indicating he had been waiting in the lobby for me for over 20 minutes.  I dashed down and met up with him, hoping I was solid enough.  He was sympathetic to my plight and we headed to a dinner place where I could have rice to sop thing up.  We found a nice Japanese place and enjoyed a fancy meal.  We walked a little.  I enjoyed the use of alleys in Australia. 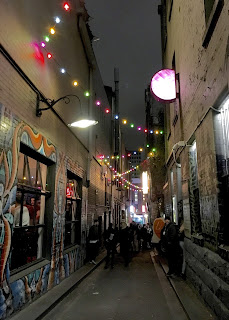 Every other alley, or so, felt like its own little party!
Feeling like I would be okay, we hopped an Uber and headed to the Fritzroy area and enjoyed a drink at Naked For Satan/Naked in the Sky 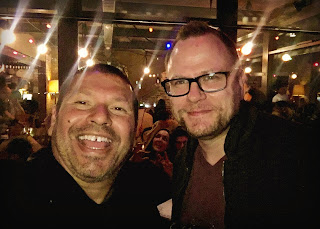 I had a Negroni, which I found a little difficult to enjoy in this hemisphere, so for the rest of the night I stuck with the reliably Glutey-free hard apple cider.  We wandered the Fritzroy on foot, where I fell for the street side trash bins. 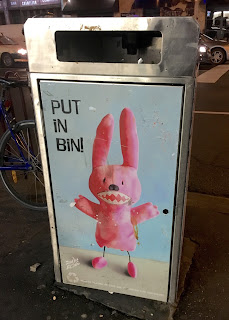 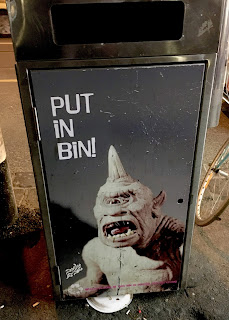 I found them quite adorable!
I enjoyed seeing some interesting street art, 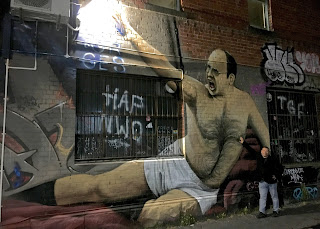 including this famous George Costanza pose from an episode of SEINFELD
I stood next to it, rubbing his nipple just for size.

Then entered a club where Karen From Finance 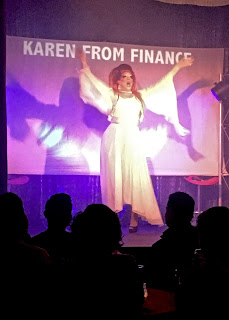 was hosting and pulling people up on stage for fun goings on... she pulled up a man of interest. 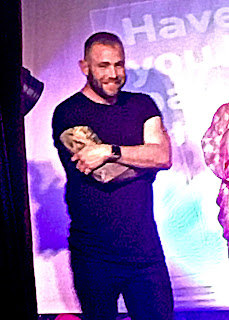 I fell in love instantly, and was moon-eyed over him for our entire visit.  Not wanting to be outdone by my crush, I got up on stage for a game of "Name the Singer" 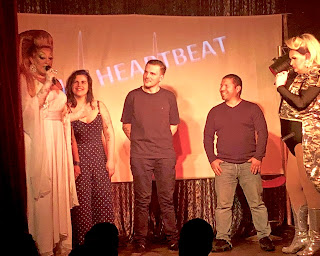 I'm embarrassed to say that my mind completely blanked out on Gwen Steffani and I got no credit for naming the group she sings for or the title of the album from which the song came.  Nevertheless, my participation was enough to win me a free drink.  More apple cider for me!
Then, Dan got in the act, got on stage and won the movie quote game, which won him a PITCHURE
of apple cider, which we both enjoyed... 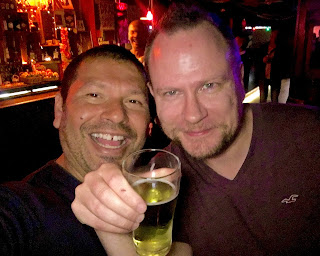 After popping into a few more clubs, here & there, we landed at the Laird for our final stop 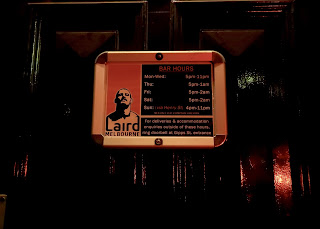 It was pretty quiet, but just my speed, especially considering the condition of muh tumtums.
Dan and I got chatty with a few fellas, one of whom turned out to be Paul Mac, who was hosting a party the next night and invited us for some fun & music. The night wound down.  Not wanting to push my tummy luck, I shared a cab with Mr. Mac & co. on their way to a party (I reluctantly turned down the invite to join them, for what would probably be the star entry on my vacation story, because I really had to sit on a terlet!)
In my room, I rode the porcelain Vespa for less time than I imagined I would.  Then, I curled up in bed ready to sleep.  As a Gay of A Certain Age, I know that you must get your rest if you for a daytime photo safari ending in time for an evening of sexy fun at Paul Mac's event the next day, before your flight home!