Too Busy For Love - Angel in America 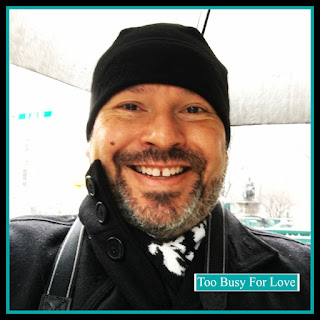 I'd love to have gone to that Mardi Gras thing in Sydney, Australia with you on that gay cruise and find loving on the high seas, but I'm too busy visiting New York!

I flew in Thursday, just in time to set my stuff down, rush to dinner with Muh DAB, Richard, at Junior's 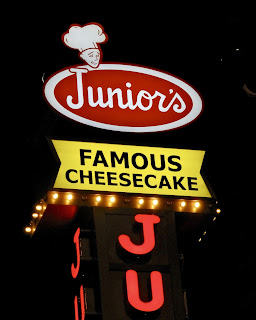 Then, rush out and find my seat at ANGELS IN AMERICA PART 2 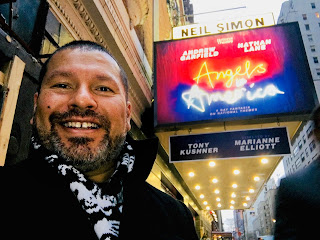 'Wait,' one might be thinking, 'you're just gonna walk into part 2 willy nilly?'  Well, here's the thing, one time when I was too busy going to Fathom events and not finding love, I saw this very same production of ANGELS IN AMERICA PART 1 on the big screen.  I missed the second part because the screening date landing on my work meeting night.  So when I went to find a half price ticket to a show at TKTS, I saw this up there and thought, 'I've seen part one, and I've been flying all day, so I'll probably end up nodding off here & there during act 1 and I know the show, so I won't be lost when I'm actually fully awake...' So this show won. 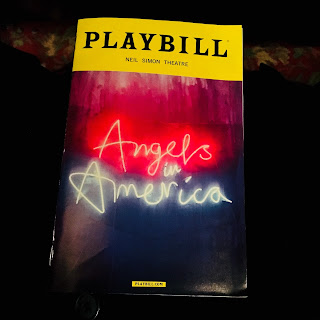 I had seen Andrew Garfield and Nathan "ick, gross" Lane in Part 1, but I was excited to see that Lee Pace was new to the cast as Joseph, who was played by Russel Tovy in the part 1 I saw.  It wasn't until after the show that I got upset when I realized that I missed Russel Tovy's nude scene!  No offense Lee, but cripes! Russel Tovy neked!! 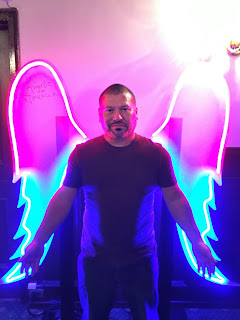 After the show I headed to Times Square to see the lights and such... 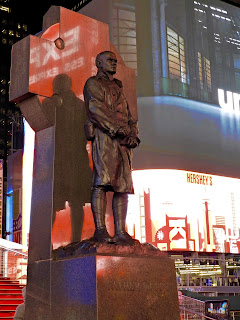 ...and to see if there were any cuties out. There were... 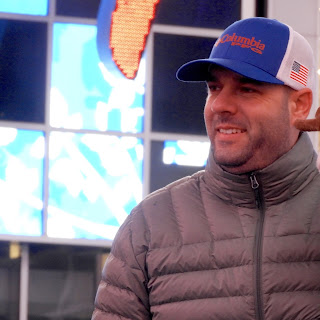 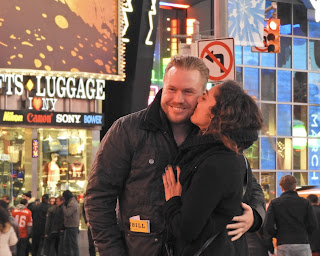 Friday, I hopped out of bed and onto a bus to get across town to lunch with my friend Kenneth,  of Kenneth in the 212.  We caught up over a tasty meal at Westville, then he went to work and I went back to my quarters to cry. 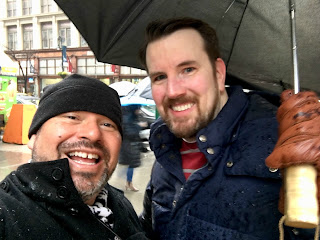 I cried because all of a sudden there was sleet and ice and coldy stuffs falling out of the sky while blustery winds blustered!
So I stayed in, until it was time for my next show 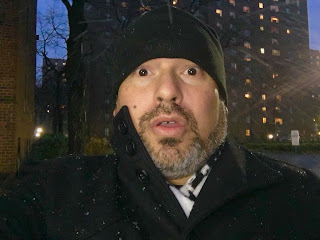 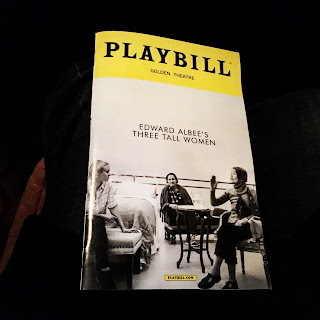 I knew of the show, but didn't know what it was about and let me tell you, it's about Glenda Jackson turning in a brava performance of an old lady at the end of her life- she's amazing!  Laurie Metcalf was her great self and Allison Pill kept up with the grand dames.
Then it was home again to cuddle up.

Saturday I kind of overslept and didn't get out to do anything except eat some two day old sushi I had bought when I got here, intending to eat sooner... I rushed over to the theatre district to eat my sushi, watch the Naked Cowboy strum for tips And checked for cuties in Times Square, (of which there were some) 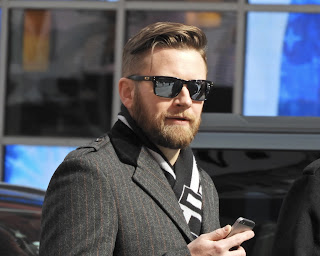 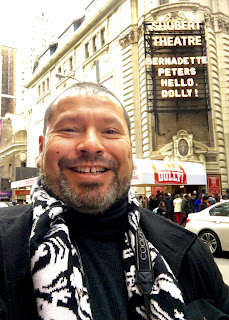 Let me tell you, I'm not the hugest fan of Ms. Peters since I felt that she practically ruined the last revival of FOLLIES as a Sally Durant who played as crazy the moment she stepped on stage.  I came to see Dolly because I've never seen the stage version, I feel it's a Gay Duty kind of thing and I refused pay $300 to see Bette Midler (Is my Gay card revoked?).  Theatre is for the people and should be priced as such!!! 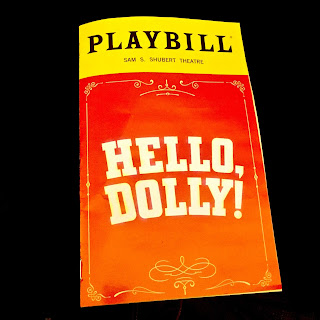 Anyhow, I was pleased when my program told me that Victor Garber was in the show.  Him, I like.
It was a delightful show and I didn't mind Bernadette here, too much, but this fell more into her cutesy wheelhouse than her last couple of Sondheim outings.  This show is old fashioned in a great sense... you know, at first when the house light went down and the orchestra started playing and nothing happened on stage, I was a tad confused.  Then I thought "Overture, dummy!"  I'd almost forgotten about the existence of overtures before a show!

I didn't get a chance to fret about how I would keep myself amused between shows because I met up with Mike Dreyden to get some face time after years of meeting, sending a message here & there on the social medias. We had a nice catch up session and discussed maybe a chance of me doing something in season 2 of his webseries LAST CALL. 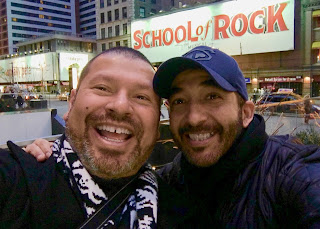 Right after we concluded our meeting, I rushed over to Sardi's and didn't dine alone THIS time.  Remember that other time, HERE? This time around, it happens that my friend, Brian, is in town for business and to see a show or two and we had the same dinner hour open!  We met at Sardi's and caught up and enjoyed out meals. Before we knew it, it was time to head off to our respective shows. 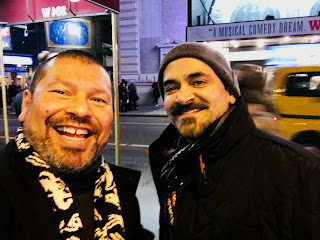 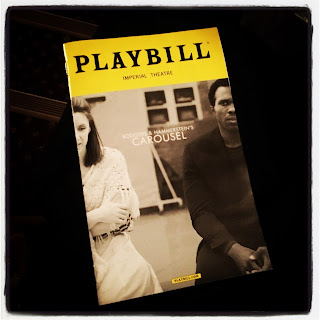 Here was another classic I had never seen, so there I was.  To be honest, Jesse Mueller got my butt in that seat.  I've loved her since she played Carol King in BEAUTIFUL.  This show is also old fashioned in a great way and the dancing!  Great dancers in the show and great cast... those voices!  I'm not sure I got the story, or why things happen the way they do and why there's this useless angel on stage for all of Billy's scenes... anyway, it's a great production and I recognized more songs than I thought I would.

Then I headed home via Times Square to see if there were any cuties out. There were... 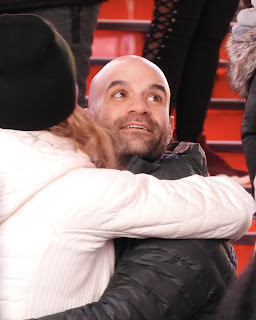 Then I tried to figure out why the Empire State Building is gay on my way home. 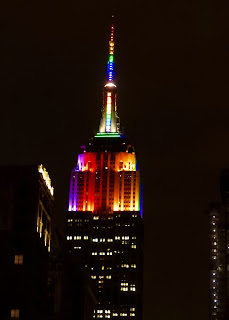 Next up is brunch with more friends, a matinee of LOBBY HERO starring Chris Evans and Michael Cera, then a rush to JFK to hop a plane for LA and missing the Oscars.

I'm sure I would have loved making out with that drunk Aussie in the pink speedo and unicorn head mask, but I'm just too busy!  But, thank you!