Gift Ideas For the Dying Alone - The Springer! 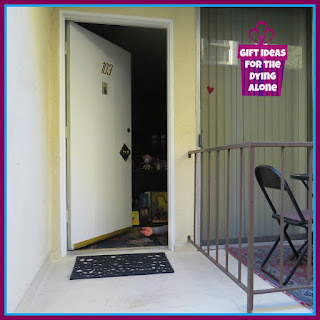 Got a DAB with a birthday coming up?  Have I got something for you!  You know how sometimes you keep yourself awake at night because you're afraid you might die in your sleep and it's a Wednesday so the people at work might think you started the weekend early and your friends think you're busy with work stuff, then they don't realize they didn't hang out with you until Sunday night, then they figure you were busy, then won't hear from you until next weekend and the folks at work think you just quit, meanwhile your body is decomposing for at least 2 weeks before people start to wonder where you are.  Then, once you get yourself to close your eyes for an extended period of time, you start imagining the smell that is finally going to attract the attention of your landlord or closest neighbors; will it be the traditional rotting meat odor, or will it be that rot with a touch of the vanilla Scentsy that you can't usually smell until you come back home after an extended time away and it's had a chance to build up in the stale air?  Well you & your DABs don't have to worry about leaving a stinky rotted corpse anymore!  Not with this new gift idea, THE SPRINGER!  The Springer is a device you put in your door knob that pops the door open 24 hours after the last hand/knob interaction.  So, if you die, or are fatally injured and can hang on, the door will pop open and catch the curiosity of your nosiest neighbor, who won't be able to resist walking in and will undoubtedly find injured you & render help, or find your freshly dead body and claim your fancy Scentsy warmer before anyone else arrives.  Of course, you can adjust the settings for vacations or extended sex sessions.
Believe me, your DAB doesn't need another frame or gift card for P.F. Changs, they need The Springer!  Because no one wants to leave a stinky corpse!
Happy gift giving!!
Posted by Danny in WeHo at 11:54 PM

Email ThisBlogThis!Share to TwitterShare to FacebookShare to Pinterest
Labels: corpse, door, Gift Ideas For the Dying Alone, The Springer