Gay of A Certain Age - Weight Until Opening Night-UPDATED 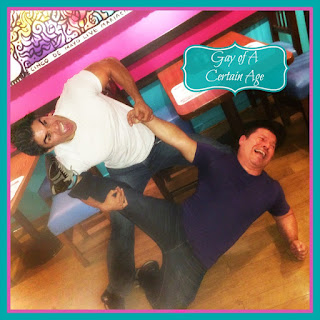 When I started with CHICO'S ANGELS 13 years ago, as Bossman ( a guy), I had no idea that this many years later, we'd still be going- getting ready to open our 5th full length stage show.  I've had a blast.  I do remember making a joke, once while rehearsing one of many revivals of a previous episode, something about doing the show at 50 years old, in heels.  Well, I turn 49 in 2 months and I think we are far from over.  I'm just hoping our movie happens sometime soon, 'cause really...13 years!

One of my favorite things about the show is that while the core cast stays the same, we have a revolving list of hunks who agree to remove their shirts and play with us.  For the most part, they've been  sweethearts!  Usually they're hot guys who, despite their trepidation, end up having a great time and a theater credit.  Not all of them have been actors, per se, but they've been great sports.  We usually have a new one each time around, to give the audience something new when the show, itself is on its 10th year.  Once in awhile, we'll find a hunk that is willing to play a little bit longer.  Duke Shoman is one of those.  He was a treat to work with in Chico's Angels 2 and now is returning for episode 5.  I'M WORRIED ABOUT HIM!

You see, there's a scene where he saves me from the raging undertow of Waikiki.  He has to lift me.  I know he's a super hunk and all muscly & such, but I just worry that I'll be too heavy and he'll slip a disc or rip a bicep during the show.  Didn't see it coming did you? This is another "Wah Wah Wah, I'm  Fat" entry!  Ha Ha!   I know, it wasn't long ago that I made my vow to look as good as my friend, Geoff when I reenact his photo by my 50th birthday, but now, I have someone else's safety to think of.  So if I'm not going to lose weight for my health, or feel more attractive, at least I can do it so that Duke doesn't get a hernia on opening night, right?  I'm not looking to transform into Twiggy, just lose 5 to 10 pounds so I'm not so hefty.  I don't wanna hurt our hunk! 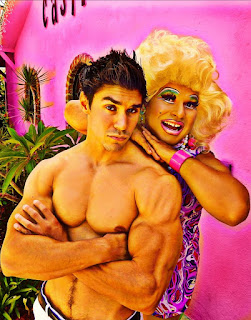 Would you wanna hurt HIM? 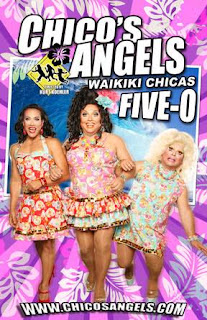 If you'd like to see him,
or the Angels, whom the show is about...
try to get tickets HERE
7 of our 10 performances are sold out! 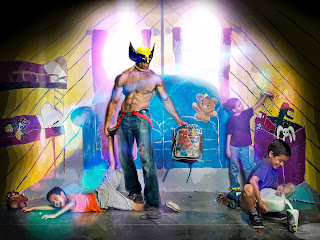 Our super talented hunk Duke,
is also a photographer by trade-
Check out his

SUbPAR HEROS pics
(Starring him in a few shots)
featured on
moviepilot.com