Gay of A Certain Age - The Geek At The Door 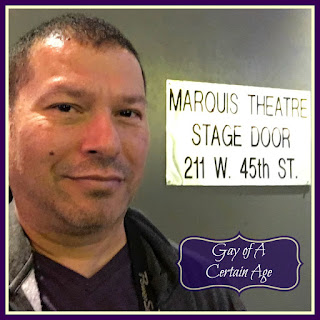 Today I had another double header.  I brunched with Richard and new LA to NY transplant, Matt Crabtree, then Rich and I headed to the theatre to catch our matinee of FALSETTOS 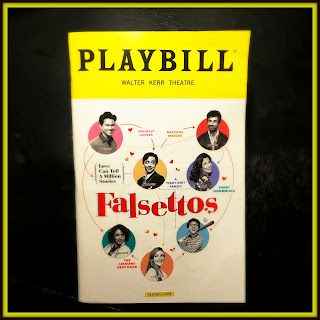 I'll admit that I was a little trepidacious going in, since I had seen the original Broadway production in 1992.  I'd seen a few productions since, and each one of those got worse and worse.  This one turned out to be a pleasant palate cleanser; it was delightful.  There were a few changes that made the show better and I really enjoyed the staging.  The biggest change I felt was that in this production, Marvin comes off much more selfish and somewhat of an asshole in Act 1, which makes his second act transformation much more remarkable.  I liked the entire cast, so I got lucky on this one.

In between shows, I did some more people watching... 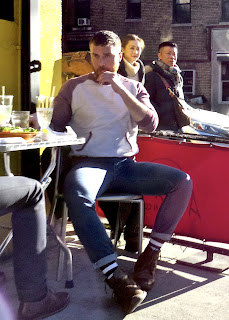 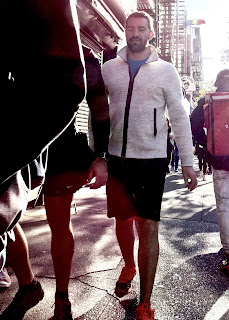 Then I was off to pop into my seat to get ON YOUR FEET! 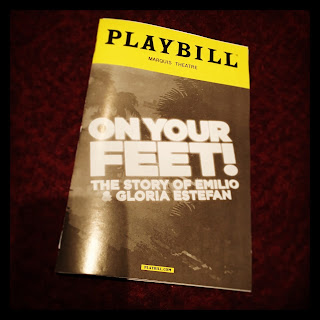 I wasn't sure how I was going to feel about this show, but I really enjoyed it, especially the dancing.  The rhythm got me and I was bouncing in my seat.  Of course, I probably would have enjoyed it much more if I didn't have the girl & her huge boyfriend on one side of me, both sloshing ice cubes back and forth in those GODDAMN PLASTIC SIPPY CUPS they now allow people to bring into the theater.  There's no more hooch! Get over it! Ya se acabo! Stop making the ice go back and forth!!  Of course, they got refills during intermission so that I could endure more ice in an empty cup for the rest of the show.  On the other side I had Tia Tencha with a folding fan that she would fan her self with for three seconds, then loudly tap her face with it ALL THROUGH THE SHOW.  Other than that, I had a truly delightful time.  After the show I went over to the stage door to say ,"Hi", to Yassmin Alers, who is in the show.  We don't know each other very well, but I know her well enough to congratulate her on the show she is in and for doing a fabulous job! 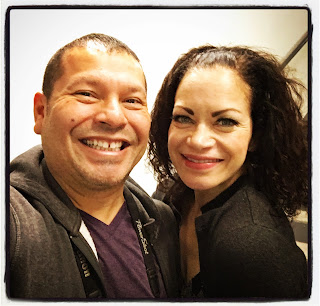 Yay!
Before Yassmin stepped out, the stage door popped open and there was Andrea Burns, who gives a fantastic turn as Gloria Estefan's mother. and whom I also loved in IN THE HEIGHTS.  I couldn't let her get away without throwing some admiration her way. 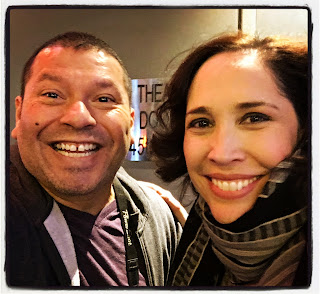 It's always nice to get to tell folks how much I enjoy their work!

As a Gay of A Certain Age, I've seen a whole lot of shows on the Broadway and have been lucky enough to meet and talk to some of the people I have truly enjoyed on stage and so while I don't do it as often as I used to, I don't think I'll ever be too old to hang out at the stage door and pour some love for the people who have made me happy.

...I also learned that you can start to feel pretty old when you're going to revivals of shows that you've seen in their original run!