Gay of A Certain Age - Feel the Burn 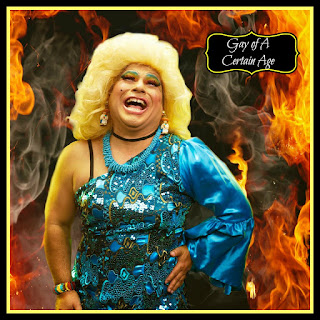 The results of this election are so devastating to me and my friends in ways some people don't understand.  Sure, I 'm worried that this country elected a man with no experience in public office, with no real plans revealed, who is also a proud asshole.  I'm also worried about our economy, environment, foreign relations and my rights as a gay Latino, but we'll survive all that.  I'm not afraid of Donald Trump.  I'm afraid of his supporters.  Trump "played the game" well and won.  Using rhetoric and actual words from Adolf Hitler, he whipped voters up in a frothy tizzy and, despite displaying all time low behavior for any presidential nominee EVER, won.  Congratulations Mr. Trump.  Unfortunately for me and my kind, after the election is done, he's President and we're left with the fear, anger and hate he's stirred up.  If you're not concerned about this, you are a lucky individual because you have never had to worry about being beat up or murdered for being who you are, or even looking like you might be "other".  This win by Mr. Trump has emboldened those who revel in their hate and anger and look to oppress others.  These people who do harm with words like "Nigger", "Kike", "Faggot" or do their harm with fists, baseball bats or easily accessed automatic weapons.  Some do the same with their GOD.

I'm not crying because my favorite cheerleader didn't get to be class President, I'm upset that these people "know" they are in the majority and they aren't wrong to hurt us.  Hurt me.  Even though I live in one of the gayest cities in the world, I still can't walk down the street at night, alone, without worry that I'll be assaulted for being Gay.  Let's be clear, I'll never feel completely safe ANYWHERE, but if the election had gone the other way, I'd at least feel like I had someone on my side, discouraging hateful behavior and actions.  Now, with this group's candidate on top, it feels like the first day of open season on minorities.

I'm also not crying because a part of me feels like, as awful as this feels, maybe there is some spark in the debris.  I was pro Bernie Sanders early on.  I preferred him because of Hilary's ties to big money.  When Bernie's candidacy didn't pan out, I happily threw my support Hilary's way.  I never believed the smear campaign that started even before she & Bill left the White House and I figured, even if she's tied to big money, she's not threatening to take away my so recently earned rights.  She's not threatening to undo all of the progressive movement we've made in 8 years, despite Republican obstruction at the highest level.  That's not even taking into account her many years of experience.  Unless there was a Republican candidate who didn't echo the last 8 years of obstruction and not threatening my rights, she's my choice.  Then, Trump happened.  He came in like a drunk, rug wearing uncle at a wedding, who grabs the bride's pussy, gives the groom a wedgie, pisses on the dance floor and pukes on the wedding cake before writing "Just Marred" on the limo in shit with his fingers.  There's no one at that wedding who wasn't offended.  That wedding is our political system with the Democrat bride and Republican Groom (accompanied by his best man, Third Party Voter) and today all the guests are left eating puked-on cake while standing on the pissed-on dance floor.  ...And before he drove away in the stolen limo, he turned CARRIE red and set the place on fire with his breath.  A little bit of me feels like yelling, "Let the mother fucker burn!"  because maybe that's what we need.  Maybe we need the whole thing burned to the ground, and it will burn, so that amid the ashes and debris, a little spark will grow into a giant Phoenix of a political system, where the parties are truly concerned with the best for our country and are more united than divided.

Trump isn't really part of the republican party, and if Russians aren't pulling his strings, maybe he isn't tied to anyone, with no debts of gratitude to repay through legislation and relaxing of regulations.  What if he actually makes decisions based on what the people need and not what big money mandates.  What if he doesn't really intend on building that stupid wall or going after my rights.  The people who elected him can't really expect him to him to keep any of those promises he made, they knowingly elected a liar.  If he said all those things simply to get their votes, lying day to day on camera, with proof, not hiding the fact that he's a liar and they elect him anyway, what's to stop him from going against all of that and doing some good for our country?  Maybe he won't take us back to WWII Germany...

Maybe I'm just a naive optimist, or a lonely Gay who's in fear for his life clinging to any delusion. All I know for sure is, as a Gay of A Certain Age, this is the most anxious a Presidential election has made me, EVER.
Posted by Danny in WeHo at 11:56 AM