This Is Why I Am Single - BAM! 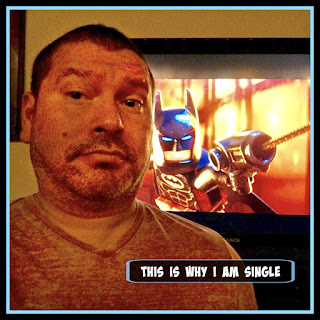 Even though I haven't posted a Too Busy For Love post in a bit, I have been very busy.  One of the activities that has kept my calendar full is trying to keep up with the movies of 2017.  I think I missed a lot of the ones I wanted to see last year and am just now reminded of them as they hit the Netflix (or those remind me of other ones I really wanted to see but will never be on the Netflix).  Anyhow, all this is to say, I finally got a chance to see THE LEGO BATMAN MOVIE.   I'll tell you I really enjoyed the first LEGO MOVIE because I went in expecting to hate it and was pleasantly surprised.  This time I went in with some expectations of quality and humor.  What I didn't expect was to get a moist eyes because I was identifying with the stupid plastic stop-motion star of the movie!    If the plot of this animated silliness is really something you would rather not know before you see it, I suggest you stop reading now (This my gentle reader(s?) is a good old fashioned SPOILER ALERT)  If you need further encouragement to leave this movie unspoiled, please visit one of my favorite He Don't Even Know Entries...

Okay, so I'm sitting there enjoying this plastic cartoon... honestly, not quite as much as I enjoyed the first one, but still very entertained... when I start feeling this weird little tug inside.  What is this feeling? As the movie continued I felt it more and more.  Was I identifying with Lego Batman?  One of my favorite things about Lego Batman is that he is an all out Dick.  He's hilarious, but a Dick.  Is that what it was?  Was I feeling my Dick strings being pulled?  No, that wasn't it, I've known about and appreciated my ability to be a Dick for years. Nay, decades!  Imagine my shock when I realized that I was thinking "OMG, I'm just like that!"  See, the whole deal of the movie is how Batman insists on working/being solo because he can do it all himself.  Of course, you know that he actually doesn't want to work with/get close to anyone else because he's afraid that they'll get hurt, which in turn means that he's afraid he'll get hurt.  It's not the most original story, certainly not for a cartoon, but CRIPES it's kind of a jolt when some bit of kids' entertainment makes you feel like you've been torn open and everyone can see inside.  Gosh Darn It!  I went for laughs, not for self reflection... Asshole Warner Borthers!  What's worse is it feels really stupid to be having this mini-emotional crisis lounging in a room filled with colorful lights and children.   Okay, wait, let's be certain that this was not a "Oh, I want kids" episode, it was totally about keeping people away to protect myself.  Yeah, that's all it is.  I know it's a simple notion, not a major revelation, but sometimes when I keep myself busy enough, I forget that's what I've been doing.  Don't get me wrong; I'm not terribly lonely and I do appreciate my time alone, but I would be lying if I didn't say that sometimes I do feel like I'm eating lobster alone sitting on a Bat Jet Ski in the middle of a large swimming pool.  So, now that this issue has been brought up to the surface, again, what am I going to do?  Not a damn thing.
Fuck THE LEGO BATMAN MOVIE!     I don't need anyone!!    You think a few well coaxed tears are going to change me??  NO!!     Not this time!  >BAM!<     I'd rather be lonely than rejected >POW!<      I love masturbating >WHACK!<

This Is Why I Am Single; I cry at cartoons

Now please enjoy this trailer for the movie that makes my revelation saddly obvious.

Email ThisBlogThis!Share to TwitterShare to FacebookShare to Pinterest
Labels: alone, He Don't Even Know, The Lego Batman Movie, The Lego Movie, This is why I am Single