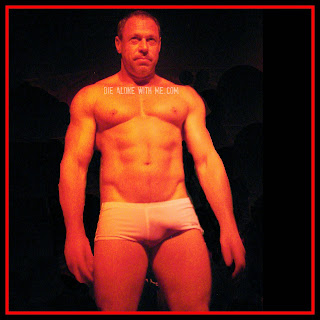 This is "Ed".
Our imaginary love takes us to great heights.
As this photo shows,
we went to the great height of the Emser Tile Building
in West Hollywood.

On this particularly extra hot summer evening,
Ed told me to trust him
and let him lead me up white
fire escape stairs on the side of the building.
He knows I have a fear of heights,
so as we got higher and my knees got weaker,
he got closer behind me
until he was basically hugging me from behind
as we reached the top.

Then he had me strip to my underwear,
as did he,
and he walked me over to the giant neon sign.
Underneath it, he had set up a little picnic
with some of my favorite eats,
including an order of Cauliflower Pakora
from Hugo's!
He also had ripe figs and Persecco
as a nice ender.
So, there we dined in our underwear under the
red glow of the neon Emser sign.

I didn't let my acrophobia
bother me
as he held me close and we looked over the edge
of the building
and he pointed out
other roof tops he'd be taking me on.
And then he took me right there.
Posted by Danny in WeHo at 12:01 PM