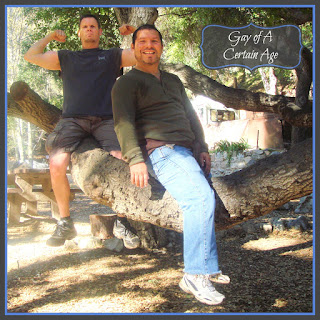 I've told you about my friend, Geoff Meed, or at least his subtle influence on my physical well being, but he is more than just a subtle source of guilt for me.  Geoff has been a constant source of inspiration.  When I first met him 20 years ago, he was already well into his acting career, becoming a renowned martial artist and all around goofball.  He had already starred in KICKBOXER 5, done many guest star roles on TV and had a nice spot in the BUFFY opening credits montage, but hadn't developed a "famous guy" attitude.  He'd gotten passed the Hollywood Guy behavior bv the time we started hanging out.  As with any acting career, things would get slow, but Geoff didn't sit around waiting for stuff, so he would write his own stage shows to act in.  He didn't have Tom Cruise's bank account, so he would pay for each production with his savings or income tax returns.  He always wrote a part for me, for which I was and am always grateful for.  My favorite role written by him was that of an evil clown who acted as narrator/Greek Chorus in VISIBLE DARKNESS.  Geoff's refusal to sit back and wait for opportunities really stuck with me and makes me feel a little guilty when I don't follow things up, just like I feel guilty when I don't work out. Thanks, Geoff!  I was happy that I got to return the favor when I wrote the role of Judas Solo for Geoff, in JESUS CHRIST SUPER STAR WARS. 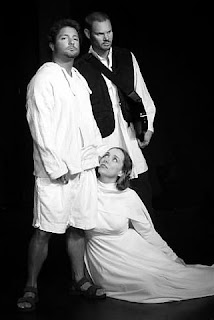 My dear friend and influence moved to Houston 4 years ago.  His acting career was put on hold for a while after, while on a job, a horse danced on him, breaking all of his ribs, puncturing a lung and breaking a good number of bones in his face, requiring a few surgeries to heal. 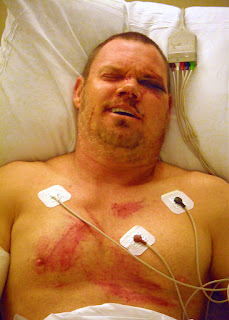 Not one to rest on his injuries, Geoff continued writing- a few screenplays that were produced.  He also opened up his own Martial Arts School, GEOFF MEED'S DOJO FIT, where he teaches actual, practical arts, not the showy stuff.  His acting career is picking up again and he continues to write, as well as teach, and he's got a nice girlfriend.  I say she's nice, because I somehow got a hold a picture she recently sneaked of Geoff.  I admire her covert styling skills. 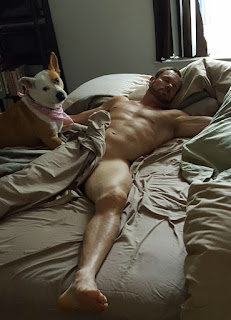 As a Gay of A Certain Age, I have once again been inspired by my buddy, Geoff, who is 50 years old and has a rockin' body even after being trampled by a horse not too long ago!  As I approach 50, (16 months from now) maybe I can, once again, find inspiration in the friend I admire and get off my ass!

Okay, after a little thought, I CHALLENGE myself to recreate this photo on my 50th birthday.  Also, knowing me, I will stipulate that I MUST have a body, fit like Geoff's, not just the one I have now.
Wish me luck! (...or will power.  Whichever)