On A Tragedy - Orlando 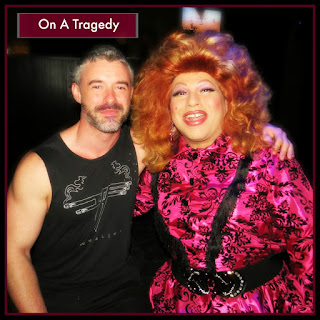 This is James Cerne.
I met him when I performed as Reba Areba at the Oscar party at Precinct DTLA, a gay club.
Today, his words about the shooting at Pulse, a gay club in Orlando, rang so true to me.
They enforce my belief that those who use their religion to suppress the LGBTQ community, politicians and money grubbing preachers alike, who have chosen us as their common enemy to unite against, are killing us spiritually and physically with their hate-mongering and rhetoric.  When the weapon they use against me is religion, I can choose not to believe in their religion and take that weapon away.  Unfortunately, even if I take away that weapon against me, their weapon becomes the confused and self-hating people they have created, along with the guns they sell them.  This Orlando shooter is said to have gone on this rampage because he was infuriated by seeing two men kissing.  What could two men kissing have to do with this guy?  Why was it such a threat to him?  Was it because whenever he has seen two men kissing something horribly bad happens to him?  He feels physical pain?  Or is it because he has been told, just as I was today on Santa Monica Boulevard by Jesus Christ's followers, that we are"Disgusting", an "Abomination" who "Do not deserve to live" who "Should die" because we are "sinning in the eyes of the" person they chose to worship?
I know I am not a disgusting abomination who doesn't deserve to live. Sadly, there are weaker souls out there who have been beaten down by these religious fuckwads who actually believe that their life is worthless and so is ours.  It is so hard for me not to write horrible, hateful things about ANYONE who follows ANY religion, especially one that sits back and lets these assholes use it to stir up murderous hate.  If you truly love your god & religion, stop worrying about who's taking a shit next to you and take it back from these truly horrible demons who have perverted it into a money making, gun profiteering, murder inciting cult.

Here is what I took from James' Facebook wall...

"I'm so mad at everything.

I'm so mad that my mom is calling me and begging me not to go to work or the parade today.

I'm so mad that I can't give blood.

I'm so mad at Jarrod chin hissing "faggot" over and over again behind me in Spanish class and miss Mahoney for smirking when I answered a question with a feminine lilt in my voice.

I'm so mad at it gets better

I'm so mad that I still meet beautiful talented intelligent and incredibly kind men whose parents denounced them as sick and disgusting and never took the words back.

I'm so fucking mad my shoulders still tense up when he touches me in public.

and the mothers who wouldn't let their sons play with me or sleep over in elementary school.

And the proprietors who ask me to play something more masculine

and every single one of my gay friends struggles with self esteem and depression. and you can do all the work on yourself and feel all the pride in the world and live without judgement


You can be as enlightened as fuck but you still have to carry all of that with you. All the time. All the hate and all the reasons why you don't measure up.