This Is Why I Am Single - Too Car Gone 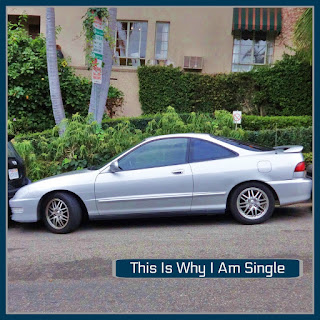 I know I have a lot qualities that other fellas may find attractive and desirable, but I must admit I fall short in many areas.  For example, if you need someone to fix your car, don't ask me.  If you need advice on what car to buy, don't ask me. If you need someone to spell car, don't ask me...  Okay, I'm not THAT incapable; I can change a tire and wipe a window.  I just never really had any particular affinity for cars.  I have never owned a new car. Don't get me wrong, I do develop a symbiotic relationship, of sorts, with my cars.  I am always grateful to them for getting me around safe and sound.  I even appreciate the smaller character traits each one displays.  ...But I am not a car guy.

I really enjoyed my silver 2001 Acura Integra.  Again, I had no idea what I was getting when I answered that Craigslist ad.  I accidentally killed my 1995 Black Ford Escort in a small incident, which occurred because I looked down at my iPod "for just a second" and I needed a car fast.  I don't usually spend much time researching or scouring the want ads... I just look at a picture and Boom, there I go.  My Integra was speedy and low to the ground, which I came to really like.  I felt sorry for valets who had trouble getting in and out of such a low driver's seat, pulled all the way up so that my short legs could get my foot to the pedals.  I later found out that some of the speediness came from the fact that my poor Integra had been used for street racing.  I kind of felt like I had rescued him, like rescuing a pitbull from dog fighting.  Little did we realize, that small fact would ultimately be his downfall.

If you recall, a little while back I blogged about car trouble, but it was more about the crush I got on the guy what was fixing it... 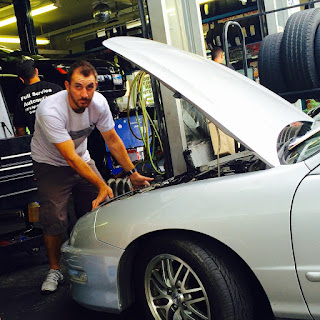 ...anyway, trouble arose when I had to switch smog-check stations and the new one called me out on something I didn't know that my original guy was letting slide.  Apparently, my air intake thingy with the thingamajig had been "tampered with" and that is a big deal.  So I took it to these guys on Highland and they took real good care of my issues, which were more than just correcting that air intake thingy & such.  So, for 2 years after, I was very happy and didn't even have to have an inspection last year!  Cut to last month when I took my car in for inspection with the registration expiration date looming.  I couldn't go to my regular guys because they we closed when I finally got a chance to go, busy as I am.  Well, the new place called me out on the air intake thingy (despite telling him that it was resolved last time and not remembering what my crush had told me about it...) and pointed out a few more incidentals that come with an aging car...

Sadly, pressed for time and thinking the costs wouldn't be worth the temporary fix, and the creaking & squeaking joints, I decided it was time to get another car.  This time, I didn't even check Craigslist.  I knew my friend Oscar's husband was selling his car for not too much more than what I paid for my Integra, so I called him and told him I'd take it.  Then, I called Kars 4 Kids, donated my car and they picked up my Integra the next morning.  Then, I called Oscar back to find out what I bought.
So, within 24 hours, my car was terminally diagnosed, and replaced with a 2008 Saab. 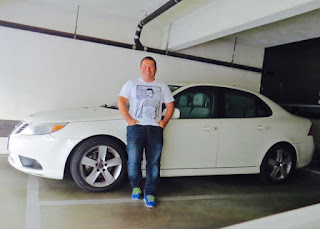 So far, it runs pretty well and has fabulous air conditioning!  Cars are getting so fancy nowadays!
Of course, now I know, that if I had done ANY research or asked ANY questions, I would have found out that they stopped making Saabs in 2014. That may be an issue later.  But do I ever worry about Later?  Not often!  So, while I miss my little, low-to-the-ground, speedy Integra, I'm getting to know my Saab and fighting the initial feeling that it's too adult for me.

Some may look at this little adventure and think I am SO GAY, that the slightest smog check problem would compel me to ditch a fine car for another, just to not have to deal with fixing it. ...This Is Why I Am Single.

Email ThisBlogThis!Share to TwitterShare to FacebookShare to Pinterest
Labels: Acurra, car trouble, Kars 4 Kids, Saab, This is why I am Single