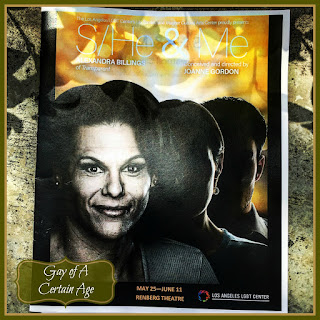 As you may recall, I claimed to be very busy last weekend, with condoms & marches & such...  One of the events I was busy attending was Alexandra Billings' show S/He & Me, which is, basically, a show about her life.  Now, I've known Alexandra since we met on the set of SOCKET, a movie she in which she was a lead and I turned in a surprisingly inept  performance as an extra.  We had a scene together, where there were only 4 people on-camera, and even though we had never met, she was sweet as pie and made me feel very comfortable shooting a scene in a movie that was shooting very quickly.  Since then we've done a number of things together; like me guesting in her show KATIE'S CORNER, where she's Katherine Hepburn doing a weekly talk show, staged readings of VALLEY OF THE DOLLS and MOMMIE DEAREST, and such.  We haven't spent a lot of personal time together beyond the requisite after-show eats at Denny's, but we're terribly close on Facebook and Instagram!  Let's just say that I've spent enough time with Alexandra to say I'm pretty sure I know who she is as a person and I get her.  Here's where I get into trouble. 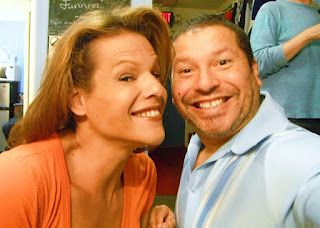 As a Gay of A Certain Age, I tend to set up little traps for myself, a lot of which have to do with assumptions I don't even know I'm making.  I've learned (and apparently keep re-learning) that sometimes gay folk (namely me) assume that since they are gay that they know and understand everything about "Gay" and all of its surrounding initials (namely B, L, T, Q).  I assumed that my knowledge gained during my journey to and experience in GAY made me an expert of sorts on everything else.  I am quick to empathize and sympathize because "I know".  I am quick to become an ally because, "I know".  I don't have to think about or consider anything else because, "I know"...
Then once in awhile, I'll get knocked on my ass (figuratively) because I discover I don't REALLY know.  I work for the City of West Hollywood, where you can't swing a faded Nagel litho without hitting a gay.  HR held a sensitivity training for employees focused on Transgender folk, which I attended even though I already knew everything.  There, I was knocked on my ass (figuratively) because I realized I knew A & Z and this training filled in a lot of letters in between.  One of the things I realized in that training is that sexuality and gender and identity are not all tied together, being one doesn't necessarily mean you are the other...  anyway I felt like an idiot for thinking I already knew.

I step back now and separate what I understand from what I know.  I realize that my journey is not everybody else's and probably not even close to 99% of everyone else's.  Now, I move through life with that new understanding and thinking.   At least I thought I did.   Alexandra is a very open person.  If you follow her on Facebook or Instagram, you know her history and journey, you know where she comes from, what she's been through, how she feels; she's the first to tell you.  Even though I knew all that, I realized I don't already know Alexandra.  First of all, as the show began, she sang.  I started crying because I didn't know she could sing.  Yes, I knew she sang, because she shared stories about it and she sang in VALLEY OF THE DOLLS, but I didn't really get to see and hear it because I was either backstage or on stage behind her trying not to drown in my flop-sweat.  This was the first time I actually sat and took in this particular talent of hers.  As the show went on, I really enjoyed the way familiar songs from other shows were given new meaning in the context of Alexandra's story, as presented.  I don't think I ever reached a point where my eyes were completely dry, because as I was learning more about her, I would be hit by feeling after feeling;  I was sad when she met tragedy or disappointment, was excited when I saw a different nuance in her performance, I was happy because the show was wonderful and everyone in it was great.  I had more different emotions to tear up for that David Mamet has ways to use "fuck".  And again I was knocked on my ass with all the things I didn't know.  I understand that transitioning from one person to another is difficult for everyone involved and that sometimes it causes a huge rift in relationships.
Even though I understand that, I didn't know that sometimes the pain a mother feels isn't because her son is now her daughter, it's because she actually misses that son.  I didn't realize that that resentment and pain could be tied up in a love for the daughter that took that son away.  I didn't realize that while there is a joy and relief in becoming the person you've always knew you should be, that the old one doesn't just disappear and in order to manage the old one you may have to be cruel and destructive to him (yourself).  I didn't realize how much strength could be found in someone who loves you so deeply and strongly that your deepest, scariest, saddest self cannot scare them away.  I didn't realize how much I could cry at so many different things in one sitting.  Yes, I was destroyed after the show. There was no subtle wiping the cheeks with my sleeve as I applauded.  There was no hiding the tracks of this journey. 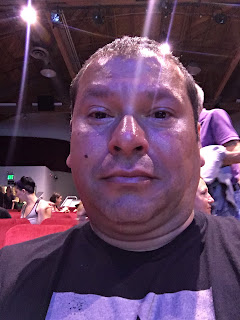 I proudly wore my cry face as I made my way out of the theatre and to my car.  I didn't get to see Alexandra after the show, and quite frankly it's best that I didn't.  I don't think I would have been able to utter a word without crying.  There was so much stirred up in me, mostly joy and happiness for Alexandra.  Also, as a Gay of A Certain Age, I know it would be foolish of me to think NOW, I know Alexandra, because people are not their shows.  That is to say, as a writer, I know that sometimes while everything can be true, some of it is exaggerated or muted to make a point or stay focused.  Aside from the great production and performances, one of the things I really appreciate is the kick in the ass and reminder that I don't know it all.  What I do know is Alexandra is a super hero and truth & light are her super powers!

Email ThisBlogThis!Share to TwitterShare to FacebookShare to Pinterest
Labels: Alexandra Billings, Gay of a certain age, s/he & me, sexuality, Socket, transgender