Gay of A Certain Age - A Shred of Friendship 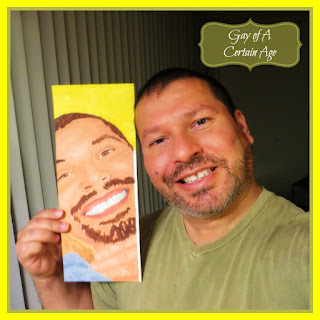 As a Gay of a Certain Age, I can say I am lucky to have the friends that I have.  I can easily count off a number of friends that I know I could call to bail me out of jail.  There are some friends that I am not as close to as I used to be, but usually when I see them, we talk as if we'd seen each other the day before.  Then, there are the few friendships that have just gone to crap and I don't care to see that person as much as they don't care to see me.  I'm not good at pretending to like someone that I don't, but I'm also not one for drama, so I can, at the very least, be civil and polite; I don't think I hate any of my former friends, I just don't trust them with my heart.  Then, there's another category of friend, that is basically "Friend-Lite".  These are people whom I like and admire, but as much I try I cant seem to connect with.  With some of them, I always feel like I'm auditioning for the friendship and they don't ever seem to let me all the way in, while others are simply on different schedules and we never seem to get together.  One night after a seriously displeasing event, which left me feeling like a humngous fool, I decided that I would stop chasing these types of friends.  That is to say, I'd stop trying so hard and setting myself up for disappointment.  Of course, I'm totally open to their invitation and would try very hard to get to them, but they have to make the first move.  I've found much peace that way.

This evening I recieved something very special in the mail, a third of a hand painted portrait.  I knew what it was the second I pulled it out of the envelope.  It was painted by a friend at a time when three of us felt very close. Unfortunately, just as she was about to finish her masterpiece, the other two of us hit a rough patch.  A really rough patch.  She tried her best to be a mediator over the next few weeks, but my friendship with the other could not be saved.  He falls into that category of I'd rather not see him because I felt our parting was totally one-sided, especially because I tried to hang on a little and show support for his artistic endeavors and show there were no hard feelings, even though we weren't hanging out or talking much at all.  The final straw came when I realized that he had unfriended me on the Facebooks.  Now, there are hard feelings.  She remained friends with him, which I did not blame her for, at all.  They were friends before I met them both and they were very close and she had no reason not to be friends with him.  I did my best not to bad mouth him when we hung out together.  They spent a lot of time together.  Unfortunately, her time was very rare and she slipped into that twilight of Friend-Lite.  I tried getting together, but dates got cancelled or when I was sure I'd see her at a certain event, she wasn't there.  When I had my revelation and stopped chasing, she was lumped into that group.  I was happy to see her on the Facebooks and the Instantgram and we shared happy comments, but I think I've seen her in person once a year for a brief moment where we had no chance to just sit and talk.  Then today, I got my shred of that portrait.  She sent me kind note explaining that she had finished the portrait of the three of us, finally decided to cut me out and presented it to him in a frame, just the two of them.  This did not hurt me.  I undertstand, perfectly, that she started the project as a gift for him and she worked very hard on it and it would be an absolute shame to have it sit under her bed for a few more years, or in a dumpster!  What I found touching was that she saved that sliver of me for quite a while, instead of throwing it out.  So, tonight I have it on my wall, next to another prized drawing of me as a pinhead.  I'm excited with the idea of getting together for a good visit with her soon! 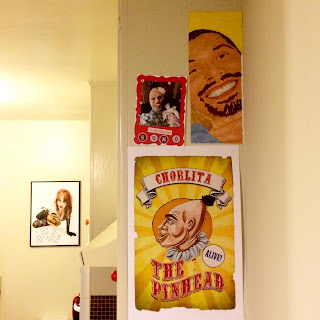 I was disappointed to learn that the other two thirds of portrait probably ended
up in the trash, after all.  He ended his friendship with her, which surprised the hell out of me, because I thought if there was anyone who was safe from his axe, it would be her.
Then, I got a little sad for him.  I honestly don't know if he has any friends left.  If he couldn't find it in his heart to find a way to keep her in his life, I don't think he knows what friendship is.  All of my closest friends, I've had by my side for well over ten years and I have some friends growing closer every day.  Sure, we've had hard times or just needed a little space, or grown apart, but we've always found our way back, or even worked to save the friendship.  I try not to take my friends for granted because I cherish them & know I need them and some of them are going to be the ones to die alone with me.

Email ThisBlogThis!Share to TwitterShare to FacebookShare to Pinterest
Labels: friends, friendships, Gay of a certain age