The Trials of Man Solo - Party of One & Then Some 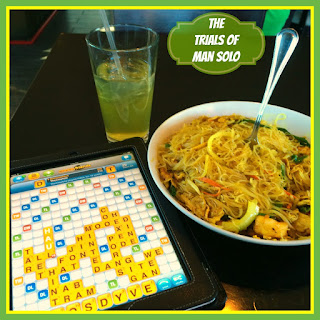 Today I enjoyed a day all alone, I didn't leave my apartment, except to have lunch.
I went to one of my favorite places that I've neglected lately.  Kung Pao China Bistro welcomed me with open chopsticks.  When one dines alone as much I do, it's important to find places one enjoys, with tasty eats, comfy atmosphere and friendly staff.  Once in a while, I'll lighten up on a place because of heavy visitation, and I don't know how long it's been since I was a super regular here, but apparently I've been gone long enough for someone else to set up Lonely Shop.  I walked in, sat at a random two-top and set out my dine-alone accoutrements; my phone (face down), iPad set on "game" and a thin veil of judgement.  I readily ordered green tea and Siapore Mai Funand and set on to trying to make an eight letter word with only one vowel.  Then, I felt my veil waft a bit when I heard the man seated next to me speak.   First, he called the waitress by her name as she walked by, then he asked her a hypothetical question about a possible future order.  I pegged him in a second; THE LONELY DINER.  He is someone I hope to never become.  He's that late middle-aged man, who is so lonely, he eats in public only to not be alone, try to make friends of the wait staff and make everyone around him feel uncomfortable.  Almost any time a staff member walked by, he called them by name and made some comment or asked some inane hypothetical, like, "So if I ordered the Sai gow, you know maybe, in the future, do you think they could serve it with a different dipping sauce than what it comes with?  What dipping sauce does it come with?"  The staff was very friendly, but after I exchanged a judgey look with the slightly younger single guy sitting on my other side, the rest of us were cringing.  As I was finishing my meal, he flagged down Jose and asked if Mary was leaving, because she had placed his check on the table, and he had not asked for it... She appeared two minutes later and removed the check from his table.

I'm not an idiot, I actually did consider that when I found a parking in that impossible parking lot shared with Whole Foods, that I actually entered some time warp thingy and was actually seated next to future me.  It had to be future me, otherwise, why would he be so comfortable talking to me?  He tried to draw me into his sad web of forlorness as he leaned over and said, "I don't know if you know this, but they have great ice cream here.  Have you ever had their almond ice cream, it's great."
To which I replied, "I sorry, me no speaky LONELY."  Actually, said, "Yes, I have.  Thank you." And shut it down immediately.  Look, I have to judge him and not give in to any pity. He's giving us Die Aloners a bad name!  I am alone, not lonely.  If I'm get lonely there's a Craiglist for it! (actually, I don't Craigslist, because I am wary of serial killers.)  Seriously though, when you dine alone, you are in charge of your own entertainment and you are there to eat.  That is it!  If you're lonely, voulunteer some place where there are people.  Pretend to have an addiction and take in some meetings!  Walk by a skin treatment kiosk at the Grove!  But, for piss sakes, DO NOT MAKE RESTAURANT FOLK FEAR DIE ALONERS!!  It's hard enough to get refills on my green tea without the waiter avoiding me because he's worrying that I'm gonna ask about climate change and its affect on springroll stuffin's!  I wish that it was future me sitting next to me, because I would have slugged myself in the face and told me to snap out of it! Cripes! Sometimes, the Trials of Man Solo, aren't about dining alone, but restraining oneself from punching a possible future-self, because it might not be...

I hope I don't have to stay away from Kung Pao some more, the Singapore Mai Fun was superb!
Posted by Danny in WeHo at 10:57 PM