This Is Why I Am Single - One From the Queue 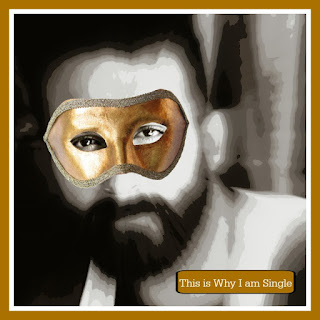 Nobody's been asking for days, so I'll tell you!  A little while back I said I had one in the queue and I should tell you how that turned out.
This is Why I Am Single (I guess you might be able to tell where this is heading); when one sees someone across the room and there's sparks, one should not let that person leave without a phone number.  That's what happened with me and I did not let him leave without my number.  As you can kind of see from the manipulated photo above, he has beautiful eyes and a plentiful beard.  He contacted me and, after an endless back & forth on availability, we made a date.  I was quite excited about that date and was all smiles and proper behavior.  As it was happening, it felt like it was going very well.  I don't think I had one moment where I was fumbling for something to say and there were no awkward silences.  We Q&Aed back and forth, while enjoying tasty cuisine of the Hugo's variety.
Then I hit a sign post, good or bad, you decide... After an hour he took to his phone and said he wanted to push something back another half hour because he was enjoying our date.  Is that good because he was having a good time, or bad because he made plans for the same night we had a date, for only an hour after we  met?  Then, when we were parting, after he said he had a great time, I asked if he wanted to do it again soon, there was that awkward pause that was absent during dinner.
Then a, "sure. Yeah.. Sure" came out, not exactly saving the situation.  I got it, but didn't understand what went wrong.
Then, as I was walking home I did the play by play in my head and figured it out.  While his eyes, beard and general niceness were very attractive, I went against one of my general rules on age.  He was young, 29.   Then, I replayed the conversation in my head and realized I was the one with plenty of Q and he was giving little A.  No, he wasn't secretive, or self centered, he simply didn't have a lot of answers for my questions.  They were simple questions, like "My favorite song is GOD GIVE ME STRENGTH by Elvis Costello & Burt Bacharach.  Do you know it?"  He didn't.  He didn't know Elvis and might have fibbed about knowing Burt.  He's a singer.  And looking back, a lot of the conversation went like that, me asking questions/talking about stuff that he didn't know about.  So while we did talk about stuff, I don't think there was as much substance coming from the other side of the table.  He didn't have enough life experience to keep up with my flowing river of pop culture and well informed opinions.  So, it went well enough, but I don't think there's gonna be a second date.  I do wish we had made out, though.  I was looking forward to feeling that nuzzly beard against my cheek.
Posted by Danny in WeHo at 6:36 PM

Email ThisBlogThis!Share to TwitterShare to FacebookShare to Pinterest
Labels: Burt Bacharach, date, Elvis Costello, God Give Me Strength, Hugo's, This is why I am Single