This Is Why I Am Single - 'Member? Monday 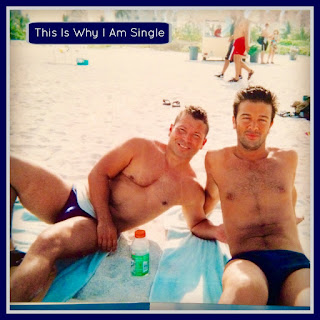 This is when I went to Miami with a group of muh DABs!  'Member?  This was my first time in Miami and it was such a great time.  Here's the thing, I might have had an even better time, but I had something weighing on me... my weight.  I thought I was hideously fat.  When I found this picture while looking for another one, I was all, "What?? I thought I was fat?"  Crazy, right? ...'Cause I'm looking at that pic and thinking to myself, 'I'd do me.'  (I'm the one on the left).  Isn't it crazy how looking back at something with today's eyes can totally change an hard held opinion one had in the past?

This Is Why I Am Single; even though I have had the revelation that I wasn't as fat as I thought I was and shouldn't have let it encumber my enjoyment of Miami,  I can't look at myself now with tomorrow's eyes and convince myself that I'm not as fat as I think I am.  Yeah, this week my evil scale told me I'm the heaviest I've ever been.  Don't worry, I'm not suicidal, and I'm already heading back down to my almost acceptable/settling-for plateau weight, through a little dieting.  My weight does sometimes knock my self-esteem down, while sometimes, I don't let it get in the way, or very rarely, I might feel like it's the reason I'm sexy to someone.  I will say, that over the years, while I have not lost or even maintained that weight, I've done better at dealing with the way I let it affect me.  Obviously, I haven't gotten any better at feeling badly enough about it that I go to the gym... but, that's another "This Is Why I Am Single", ain't it?

Email ThisBlogThis!Share to TwitterShare to FacebookShare to Pinterest
Labels: hindsight, Miami, Shirtless, This is why I am Single