Gay of A Certain Age - It's Harder When They're Free 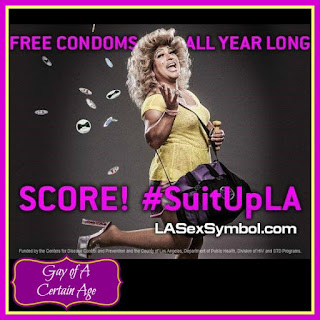 So, one time, (it may not have been this past Friday, but it really happened!) I was all neked with this hot guy and I was all excited to be with him, I even took a little blue pill to make sure everything would be up to snuff.  He made me dinner and excited.  Then we talked for a little bit, then  got down to ass tacks.  We nakified each other, rolled around with the kissing & such and then we came to the moment of "going all the way".  That's when it hit me, we need to have THE TALK.  We were going to have to stop our tumbling into positions to discuss; condoms or no.  Granted, we prolly should have taken care of the neg or poz talk during our post dinner/pre-rolling neked chat, but we didn't and here we were.  This hottie was not a stranger to me, but he was still new. We discussed whether we would or not, got into a mini-discussion on PrEP usage and how a lot of folk are using it instead of condoms, rather than with condoms as a second layer of protection.  That got us into a mini-talk about recent case of the guy on PrEP who became positive.  While were talking, in my head I was all, "OF COURSE you're going to use condoms- you did a butt load of PSAs about condom usage! Don't be a hypocrite!"  Even with my voice yelling in my head, I must confess that in my limited sexual encounters, I have not always used a condom, but in those cases there had been The Talk about it and the decision was reached mutually.
One particular issue I had been dealing with was the whole erectile dysfunction thing and how much a condom contributed to it.  Meanwhile, back in bed with the neked hottie, we voted condoms "yes!"  After all, I had taken a pill for the Erectile Dysfunction, so that wasn't a worry.  On to rolling around neked, we went!

As a Gay of A Certain Age, I certainly know the consequences of contracting HIV & AIDS and the importance of using condoms.  I also am delighted that on this recent occasion, The Talk did nothing to diminish the mood.  In fact it boosted it some, because I was more free to enjoy myself without the worry or guilt that comes with not using a condom and more so, I was way turned on because I was with a guy who I could talk freely about my history without feeling judged and because he spoke freely in return and cared about what I wanted.  That's hot!

If you'd like to get free condoms and/or see the butt load of PSAs starring Chico's Angel, click HERE