Gay Of A Certain Age - Is He Talking To Me? 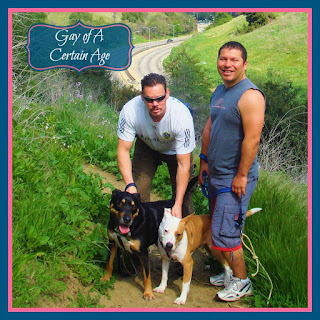 This is my buddy, Geoff.  We used to hang out quite a bit before he moved to Houston.
Here you see us doing something outdoors and physicalistic & stuff- that's how it used to be for me;
Meet up with Geoff & his girlfriend, load up the dogs and go climb a hill or something.  Since he's moved away, I don't do much of that any more.  I'm not blaming him for my getting fat, but it was kind of selfish of him not to think of that before moving away.

As a Gay of A Certain Age, I've realized that it's important to consider the friends in your life and what influence they have on you.  I always felt grateful for having a friend in Geoff, but I never even considered the subtle influence he had on my physical well being.  We never went to the gym together and I never took his kickboxing class, but our regular hang out time did include fun, active stuff, (made extra fun with his goofy dogs).  Geoff moved away 3 years ago and I've gone to visit him twice and in that time, he's opened up his own DoJo Fitness place.  We still keep in touch, but I'm a little upset that instead of telling me that I'm fat, to my face, he put out this video for the whole world to see!