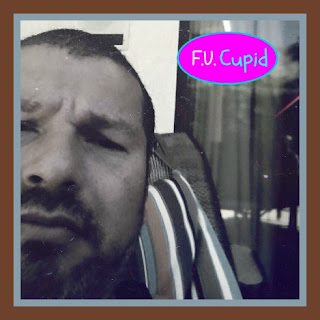 When I visit this site, which is usually only when I get a message from someone or the Cupidbot sends me a notice that someone likes me, I try to do it with an open mind.  I know I can be very judgmental.  I kept that in mind when I was creating my profile.  Instead of saying what I didn't want, I put up things I wanted, then lay little tests that would let me know if a responder "got" me or not; like my posting of a Kids in the Hall monologue for "What I Often Think about".  Anyway, I really get bugged by some profiles that immediately put me on edge.  Like this one: 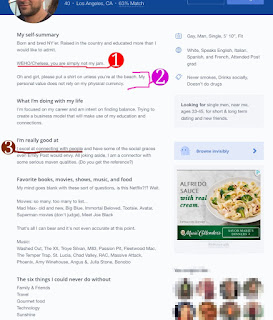 I look at the profile pic and think, "My, this is a handsome fellow.  I wouldn't mind sharing a malted with him at the local five and dime."  Then I'm immediately turned off by the following;

1:  WeHo/Chealsea, you are simply not my jam.
WTF?  I'm already disqualified because of my address?
Or is he one of those idiots that lumps everybody into one category because he finds the behavior        of some people from the same area distasteful?
Yes, everybody in this 1.3 mile area acts exactly the same way and should automatically be

dismissed.  Besides, Chelsea isn't even Chelsea anymore, what with 8th avenue
invaded by banks, nail salons and drugstores & G Lounge closing along with mostly all the
others... This ass has the nerve to bundle me in with whatever stereotype he has in his douchey
mind without having even met me and that bugs me!

3: "I excel at connecting with people..."
Finally, I get a chuckle.  Seriously, he's going to start his profile by shutting down people in
back to back paragraphs and then say he excels at CONNECTING with people??   This is the
worst part;  I get the impression that he doesn't really know himself- at least not as much as he
hates himself.

Despite immediate impressions, this post is not written to simply blast this guy, it's to say that I wish I could go on to a dating site and read a profile without feeling attacked.  It's hard enough to get the rejection after approaching someone, but to get rejected by simply reading their profile is just disturbing. I feel like I'm being pushed aside on my own screen!  Luckily, I've been watching CRIMINAL MINDS for over a decade, so I know and understand human behavior.  I can suss out, that the matter here is not with me, but with him.  It's all about him.
Posted by Danny in WeHo at 6:30 PM