I'm Dubious - How NOT To Be Single 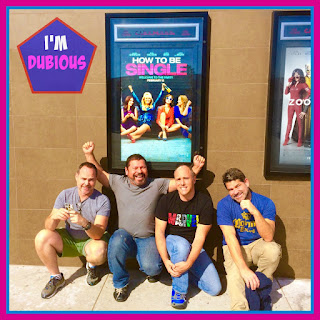 It looks like I was correct to doubt the veracity of this Hollywood take on singledom.  Now, I'm not saying that Gay Singles are exactly the same as Straight Girl Singles, but there are some universal truths about Dying Alone that apply to everyone regardless of sex and orientation.  To be sure that I wasn't just taking this anticipated assault personally, I took a few of muh DABs with me; Dennis, Robert and Matt.  To start, we saw this movie in very luxurious seats, that you might find in the first class section of your favorite international airliner (I'm not gonna say where, because it's super cheap and I don't want to ruin it by telling everyone where it is, then having it be mobbed to the point that I don't want to go there anymore.) and we were sated with reasonably priced movie snacks, so this wouldn't be a case of us just not in the right setting.  The lights dimmed and I sat, ready to be proven wrong.  As the movie went on, I noticed a lot of heavy sighing, flipping off and eye-rolling coming from my companions.  Yes, if done by a gay, you can actually hear eye rolling.  I have a feeling I was much more forgiving than muh DABS.    After the movie, we gathered for eats and a post-mortem.
HOW TO BE SINGLE, ultimately couldn't find the spot between universal singledom truths and Hollywood cliche.  Matt thought the movie was pretty good at putting Alice in the "We're on a break" situation and its results, as well as identifying the difference between someone being pushed away as opposed to someone leaving, but he couldn't help but feel that TRAINWRECK was more correct in it's portrayal of singledom.  Robert thought that the movie was correct in its depiction of Millennials, especially the way they talk, but he thought it went too far in depicting how some work to remain single, especially going as far as to cut off the water in their home to prevent possible hangers on from wanting to stay.  He also noted that there are seemingly no gay people in NY, according to the movie.  Dennis didn't buy it at all.  He said it made him appreciate the realness of SEX AND THE CITY!  For him, none of the characters seemed like real people and the movie failed at capturing the feeling of real personal interaction.  For him, a better movie on the subject was SLEEPING WITH OTHER PEOPLE.  Honestly, muh DABs didn't care much for this movie at all.  Aside from, whether they got singledom right or not, they felt the movie was poorly written, and populated with more than a few unlikeable people.  Dennis basically said if this is the last Romantic Comedy that Hollywood churns out, it'll be because this movie destroyed the genre. None of them cared for the voiced over bon mots that sounded like; "Sometimes when you're trying to be single to find yourself, you find yourself alone and it's hard to play foosball alone." Indeed!

I wasn't so hard on the movie, but I didn't think it was very good, either.  How does one judge a movie's depiction of subject matter, when the movie is not very well put together?  It's hard to focus on the feeling of loneliness/self sufficiency of singledom when the story is spread out among too many characters.  There were a few moments that rang true for me, like when you feel like things are going well in a relationship, then suddenly out of nowhere, something pops up and the relationship is over.  What I missed here was the reaction to investing three months in a relationship then it being terminated over something one can't control.  I think I just stumbled onto something that was nagging at me.  What was missing in this movie was the anger!  Where were the rants and rages about how difficult it can be?  Instead of venting with a well placed rage about getting screwed over again by someone who was surrendered to, this movie goes for the cutesy "let's party our problems away".  Worst of all, by the end of the movie, where our main character, Alice, unsurprisingly ends up where she does, spouts another, "Alone is really just ONE with ALL taken away.  Who needs ALL that anyway?" type saying and muh DUBs all let out sighs of exasperation, I worried that my blog is full of that crap!    During the post mortem, I asked how one would reveal a realization like that without sounding trite or maudlin and they all said, "don't say it."

I'm Dubious that I can continue this blog without airing the trite & maudlin bon mots, because sometimes you can take your DABs to take pot shots at a movie and the biggest shot can ricochet right into you!
Posted by Danny in WeHo at 7:04 PM

Email ThisBlogThis!Share to TwitterShare to FacebookShare to Pinterest
Labels: DAB, How To Be Single, I'm Dubious