Getting Out - Brand New DAB with a Side of HAM 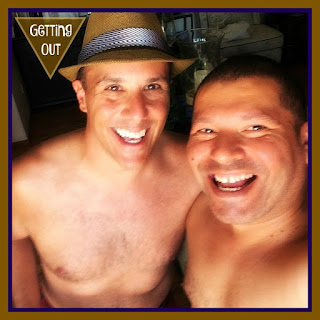 Despite the urge to stay in and watch new TEEN WOLF episodes this past Saturday night, I joined my friend Jerry for an evening of story and song as delivered by the delightful, Sam Harris at the Renberg Theatre.  It was quite an enjoyable evening as Sam told us about his growing up, knowing that he was meant to be the fabulous entertainer that he is.  He did it with just the right amount of tongue in cheek... after all, the show is called HAM. 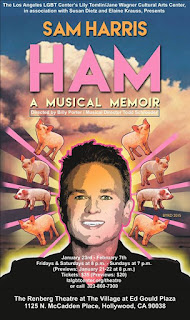 When one goes to one of these events in one of these venues, they are bound to see other folk they know.  This very night, I was pleased to see my friend Robert in the house and he sat with us.  Alone.  Robert announced to us that he has joined the ranks of muh DABs! (Die Alone Buddy).  I was sorry to hear of the break up, but was quick to inform him that he shan't die alone, because he could die alone with me.  Then we started commiserating about on-line dating.  It's so nice to have a new DAB!
As you can see, Robert is a handsome, fun loving, sweetheart of a guy who enjoys pool parties! 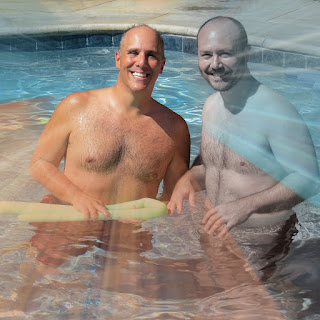 If you have any interest in Robert, let me know.  I'm sure he'd like to know there's interest out there!
If I have to lose a DAB, I suppose it'd be nice to lose him to an eligible suitor.  meanwhile, I'm sure Jerry was dying for the show to start, since he's been happily relationshipped for years and all this dying alone talk must be so old hat and unimportant to him.  "Calm down, Arlene! There'll be songs in five minutes!" I might have yelled at him for no reason. I just had to make sure Robert knew he was muh DAB and I had his back.  That's a gift of Getting Out!