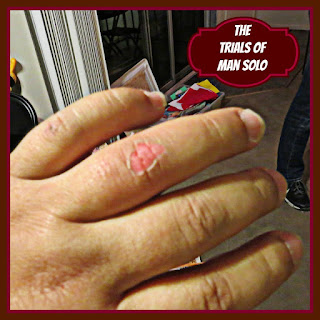 So, Craft Night has come and gone, but I'm still reminded of the event.  You see, there was a horrific accident that occurred, which I chose not to tell you about, until now.  It all happened when muh DAB, Brett, chose a heavy item to affix to a sturdy card.  Being the experienced crafter that I am, I had a glue gun ready to go.  I assured him that the hot goo was the way to go.  He took the gun and aimed at his card, but nothing happened.  Certain that it was operator error, I seized the gun and pulled the trigger firmly.  Nothing happened.  I realized that the glue stick was falling short of the barrel, so I loaded another stick behind it and pulled the trigger.  It seemed a little hesitant, so I applied more pressure.  That's when I felt the burning on my finger.  I had gotten a huge glob of molten goo on my knuckle.  I pulled at it right away, knowing that every fraction of a second that it cooled, it would take more with it.  More what?  Skin.  My skin.  There I was with a glob of skin encrusted glue in one hand and a fresh, open sore on the other.  Suddenly, muh DAB, Brett went into action.  He hurried me into my bathroom in sort of a panic.  Maybe because I am a horror movie fan, the site of my sore didn't worry me and the pain was not so bad.  I let Brett do his thing, anyway.  He made me wash the wound in cool water and prepared to sterilize it.  He was shocked that I had no alcohol or Bactine to put on the fresh flesh.  I was embarrassed that the best that I could offer was hydrogen peroxide, that was probably purchased for purposes other than wound bubbling.  I was surprised that I had Band-Aids, so he carefully wrapped up my finger and seemed satisfied that I was taken care of.  I was, too!  While my didn't feel too nice, I did feel good that Brett cared.

Brett said he couldn't believe that I wasn't moving faster to take care of my wound.  I had no words.  Such are The Trials of Man Solo: When it's just one in a home, one might not take care to stock the place with first aid stuffs because there is no one they are concerned about to aid.  Which in turn, makes one worry that they are not concerned for themselves!  Seriously, I don't have any rubbing alcohol or Bactine in the medicine cabinet?  And my Band-Aids are over ten years old?  My excuse is that, luckily, I haven't had any incidents that called for that stuff.  I suppose I should think of myself a little bit more and stock up on "care" items.

I didn't spend much time beating myself up for not giving a crap about myself, because my mind went straight to finding the cause of the incident.  I am a detective at heart. 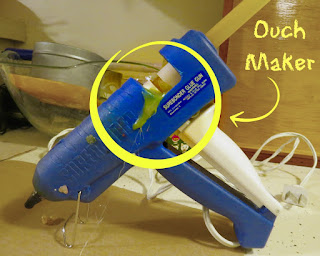 A quick study of the deadly weapon showed that, somehow, the first glue stick got clogged in the barrel, while the secondary glue stick I inserted, forced the sticky lava to pour out of the side and onto my dainty finger flesh.  Satisfied I understood the incident, I unplugged the fucker, tossed it in the trash and continued crafting cards.  That's how I roll!

Thank you for taking care of me, Brett!
Posted by Danny in WeHo at 9:43 PM