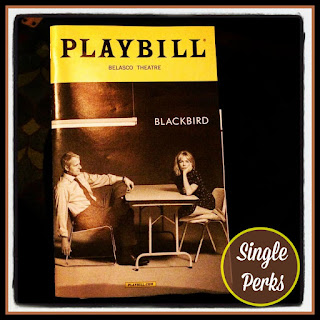 I love going to the theater!  The only thing I love more than that, is having a great seat at the theater! Being single makes it so much easier to find a seat!  I don't mind seeing shows on my own because my ticket purchase time is cut dramatically when I'm picking a seat for only myself.  I don't have to worry about anyone else's preferences, and very often there are single seats orchestra center, whereas the only pairing of seats will be way off to the side or rear balcony.  For example, when I saw SPAMALOT for the first time, I went with my friends Dana & Eddie. 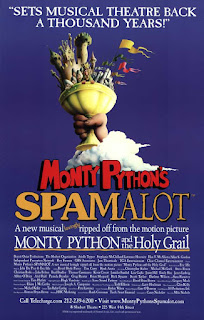 When I was purchasing tickets for three, the only available ones were off to the side in the mezzanine.  Normally, I wouldn't take these seats and look for another day, but this arrangement was day specific, so I took those seats at full price.  When we were seated I was dubious, then I got angry once the curtain went up and revealed that about a third of the set was blocked from our view.  I had a hard time enjoying the show because I was so angry that they would even sell these seats at all, especially at full price!  Luckily, my friend Jeff was later cast in the show, so I had occasion to go back and see it again- in a fabulous single seat, orchestra center.  I enjoyed the show much more, then.

So, last night, last minute, I popped up to the TKTS window, saw BLACKBIRD listed, asked  if there were any good seats for the show and the lady said yes, (I have opted to not to see any show for an evening because there was not a good seat, even at half price) and by 8:00 pm I was seated just a few feet from Jeff Daniels and Michelle Williams as they performed.  Seeing an intense play like this from the fourth row; them's the perks!

Blackbird by David Harrower is a rough play about damaged people, only getting more damaged. The show is in previews, so this isn't exactly the final product. I think the preview time is still needed, because I felt while the acting was really good, there still some developing to occur. Right now, I feel like Michelle is not committing to the actions of her character, mostly because those actions are a clear detriment to said character. It's also because those actions are contradictory to her character's reasons for being there. Her physicality is great, though. These are not easy roles.  Also, I think the tension was a little slack, but I think in a week or so, this is going to be top notch.   I loved the set, too!