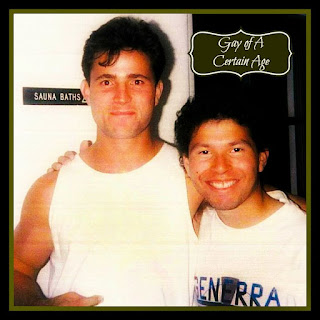 I have a birthday coming next week and all of a sudden today, I started thinking about the good old days and this college crush came to mind.  This memory is circa 1991. His name is Sean and I met him in my Acting 2 class. There were only seven in the class since the new-ish acting teacher, whom I 'll call "Professor Psycho Swift" had scared off most of the twenty-five Acting 1 students. Luckily, Sean was a transfer and had no idea who Professor Psycho Swift was.  With so few in the class, my interaction with him was plentiful and plenty nice!  I was a young gay and was totally smitten with this guy.  What I liked about him, besides his hunky good looks was that he was just a plain ol' nice guy. He had a very pretty girlfriend, Shannon, and she was nice, too.  I could not get over how much I liked, Sean, so much so, that I think he might be why I may have impossibly high standards for a suitor; beyond the good looks, they have to be a total sweetheart.  I think he knew I had a huge crush on him, but he never shied away or turned any moments awkward.  He was kind without leading me on and gemerous. I can say I rarely heard him speak ill of anyone HE'S SO NICE!

As a Gay of a Certain Age, who came out at the age of 28, I don't regret all the sex I didn't have, instead, I cherish the crushes I had on a few good men, who showed me the nice stuff without the sex.
Posted by Danny in WeHo at 5:07 PM