Gay Of A Certain Age - A Girlfriend I Could Love 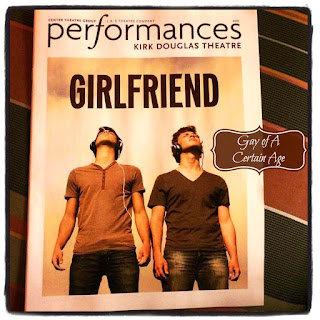 Last night I went to see GIRLFRIEND at the Kirk Douglas Theatre and thoroughly enjoyed this gem.
I had no idea what the show was about before I walked in, except that the show was built around songs from Matthew Sweet's Album of the same name.  I am saddened to admit that I have not really taken time to listen to Matthew Sweet, and apparently missed out on a grand experience, listening to this album when I was younger.  Now, I've purchased the album on iTunes and hope that there is an Original Cast Recording to come.
I might have been thrown by the title of the show, but I was not expecting to see the relationship that develops between these two guys.  I really enjoyed watching it unfold, even though it made me a little melancholy about coming out so late in life.   Looking back as a Gay Of A Certain Age,  I didn't come out (including to myself) until I was 28 years old and I didn't really do anything with guys or girls in that time.  There was some weird stuff with my roommate, Shelby,  the year or so before I came out; something I think that had to do with unrecognized sexual tension which ended with me getting punched in the face over a missing beer mug and him getting arrested for assault.  I never got to have the young love story or the first love story.  While other gays were finding themselves in exciting, frustrating and terrifying  love stories, I was enjoying living life without sex and through the love stories of those who lived in KNOTTS LANDING. (Is it a coincidence that I came out less than a year after KNOTTS LANDING was cancelled?)  If I didn't have the young love story that played out from meeting, to dating, to relationship, to break up, I at least had the delicious awkwardness of meeting someone I really liked, with no idea why I really liked them and not knowing how to express it, along with not realizing, until years later, that someone really liked me that way, but I was clueless because I didn't know I was gay.

Regardless of my lack of experience as a fresh out of high school gay developing a relationship with a fellow youth, I really felt with these guys and went along for the entire ride, connecting through the music and recognizing the feelings and thoughts that defy age.  Maybe I'm more empathetic than I should be, but after this show, I kind of felt like I actually lived the young love story... or maybe the show and cast were that good.  Anyway, I'm glad I caught this show before it closes tomorrow.  If you have a chance, see it, it's delightful and touching.