This Is Why I Am Single - The Constant Reminder 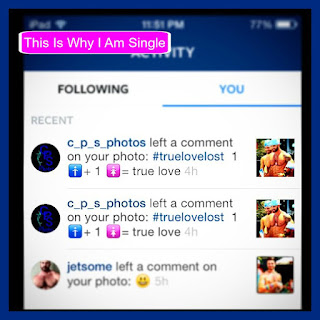 So there I am, minding my own Instagram when some little fucker leaves a comment on one of my photos... 1 man + 1 woman = true love #truelovelost.  There it is in one emojied sentence- the experience of being gay, or black or just different.  No matter how progressive or liberal you may think the world around you is getting, there's always going to be some one or some group that will come to you, unprovoked and try to put you in your place.  Here I have some nitwit trying to tell me, that as a gay man, my love is not valid or true.  I'll venture a guess that he considers himself a Christian and he probably attends a church where they approve of this attitude and behavior. He and others like him, wouldn't know true love if it was in front of them because they are too busy looking at photos of shirtless hunks and leaving homophobic comments.  Again, unprovoked he came to me to spew his hateful message.  I'm not hurt, so much as annoyed.  I am secure enough in my sexuality and emotional being to know the validity of my love, but I'm not secure in my emotional restraint.  I know the right thing to do would be to ignore & delete, but it was late and I was tired & weak, so I responded. At least, I was provoked.  I commented on every photo he posted.  I started with "Some guys suck (emoji rooster)", something I thought was appropriate, cute, a little shocking and not personal.  Then, I started criticizing the photos, themselves.  There were plenty that were out of focus, poorly cropped or badly framed.  Then, I noted or hashtagged all of the photos that featured phallic symbols, like the tall building, the jellyfish, the mushroom and furry caterpillar. On one aquatic shot I commented "the stingray is flat, like your photography".  I'm neither proud, nor ashamed that I turned into some bitchy queen and I'm sure when he sees the comments, he's going to feel like he's the victim.  I don't worry about myself becoming a monster, either, because it wasn't long until my focus went from hurting his feelings to amusing myself with what I felt were clever insults.  Here's my question, why should I worry about hurting his feelings? Why should I put the kid gloves on? Why should I show him any mercy? Why shouldn't I face this evil with evil of my own?  Because I know it is wrong.  I know it is wrong to make anyone feel less than what they are.  I guess I did it because I wanted to knock this homophobic little fucker off his high horse (there was a photo of horses that inspired a Dr. Freud comment), even though I knew it was wrong.  I don't know if it was justice, but I do know it was therapeutic.

This Is Why I Am Single: Every day I'm faced with constant reminders that my love is less, that love for me is less, that I am less of a person and I don't deserve to be loved like straight people are.  Whether I am engaging in an argument or minding my own business, someone will remind me.  It doesn't matter that I don't believe it, it's difficult finding the other half of the couple that isn't damaged by it.  How many guys have I tried to build a relationship with whose part in it was diminished by these everyday reminders?  How many gay men are doomed to never having a relationship because they will never believe that they are worthy of love? How many of them have self hatred that is endlessly fed by all these messages?  That's why we have to push back, so that #lovewins
Posted by Danny in WeHo at 2:03 PM

Email ThisBlogThis!Share to TwitterShare to FacebookShare to Pinterest
Labels: #lovewins, homophobia, self hatred, This is why I am Single