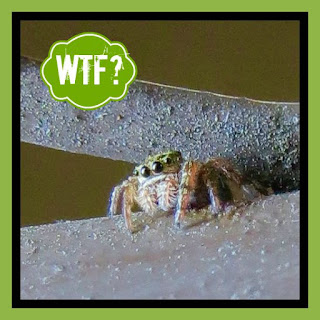 This has nothing to do with being single, or living alone,
except that it happened while I was with one of my DABs...
It's something I worry about every summer and tonight it almost happened!
See, muh DAB and I (mostly muh DAB) thought it would be a good idea to walk from his place
in West Hollywood to the mall in Century City to see MISSION IMPOSSIBLE 5.
The walk took more than an hour and by the time we got to the theater, MI5 had sold out,
but we walked a long way! We weren't just gonna turn around and go back home,
so we saw FANTASTIC 4, instead- that's not the weird tale! (Believe the bad reviews.)
It was as we were walking back, through the sketchy neighborhoods of Beverly Hills, in the dark,
when I brushed up against a bush.  I felt a tough, stringy web thing on my arm and brushed it away.
Then I commanded muh DAB to stop!  Right in front of us was a spider web stretched across the
sidewalk.  A closer look revealed a spider right at face level.  Had we kept walking,
one of us would have kissed a spider!  I moved over to the street, to walk where it is safer.
I was almost gloating how I had saved us from a vicious spider attack, when I felt the stringy webbing, still on my arm.  I brushed at it again and when I looked down, I saw another spider ascending the web right up my leg!!  I did the gayest little dance while I lept off the ground to put distance between me and the spider that was attached to the web stuck to my arm.  It kept coming up!
I finally broke the web and he fell straight away as I continued to dance.
I love summer, but I hate inconsiderate spiders who build their webs across walk ways, or even,
as once in my former home, across the door way!

The little guy I took a picture of above, wasn't in a web, but skittering along the doorknob to the garage.
I don't want them dead, I just want them to keep in their own space!
Anyway, the weird part was the dance.
Posted by Danny in WeHo at 11:30 PM