Gay Of A Certain Age -Abe Froman's Day Off 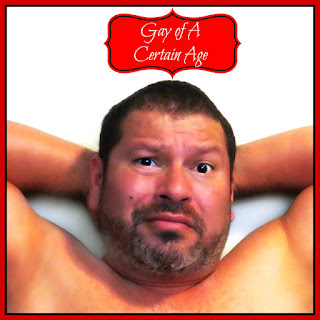 Let's begin today's entry with a hop into the Way Back Machine and travel to 1986.
It was a year of tragedy with Chernobyl and the Challenger Space Shuttle exploding.
It was a year of happiness with MAGNUM P.I. as the number one show and the introduction of the Omnibot 2000!  It was also the year that John Hughes gave us FERRIS BUELLER'S DAY OFF.
I mention that because you should know who Abe Froman is. Abe Froman is the name that Ferris steals off of the reservations list to get a table for him and his friends in a swanky restaurant.  The host is dubious, because Ferris seems much too young to be Abe Froman, The Sausage King of Chicago. 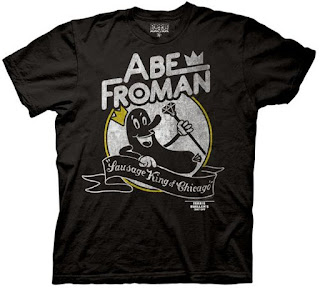 You should know who Abe Froman is because, at a time when guys gather together and proclaim a name for their private part, I named mine Abe Froman.   You should know I did this in order to bring the whole thing full circle and explain the title of today's entry.  You see, I was having "fun" with a male friend of mine, naked, and right in the middle of the fun, my Abe Froman decided to take the day off.  It's crazy! I was mortified.  I couldn't understand it. We were "playing" nicely, footloose and panty free, when I thought it might be fun do gymnastics and do a half-back flip without "dismounting."  It seem to go well, until I landed and not only did I not stick the landing, I totally slipped off the mat!  My friend was very kind while I tried not to freak out about it, because I know the more you freak out about it, the less likely Abe Froman is to return.  We played other games in hopes that Abe would just pop up, but no.  I think he went to the MET to admire art or something.  I helped my friend finish his game, then we went out for lunch.  We had delicious savory crepes, while we chatted and laughed.  After lunch, as we were saying good bye, we had one of of those good bye kisses that leads to another with a giggle, that leads to another.  While we were in the middle of this long goodbye, who should turn up, but Abe Froman saying, "What did I miss?"  My friend noted his arrival and said he looks forward to playing again soon.

First, my friend is such a sweetheart for not making an issue of Abe's desertion of us.  This isn't the first time we've played, there have been some very nice and exciting play dates before, this was just one where we decided to play full-contact.  I have no idea what happened to Abe.  I enjoy my friend's company very much, he actually excites me and we get along very well when not in the sandbox.  Honestly, if all we did was cuddle in the sandbox, that would be enough (SHUT UP!)  That's good, because, at the very least, he knows Abe likes him very much.  I know Abe likes him, too!  So where did he go?  I wish he could talk to me and tell me.  Abe and I are together very often, at least once a day, AT LEAST.  That lets me know he doesn't mind being around me.  So what is it?  Am I too fat?  Is this a weight thing?  Could Abe be affected by my weight?  Am I too old?  Does Abe get bored of my stories and leave sooner now?  I'm only 47, is that when every guy's Abe leaves them with no notice?  I'd hate to think that I have to offer Abe some blue candy to stay with me.  Do I have to get little blue candies, now?  Do they mold?  I rarely get the opportunity to play, so I don't know how often I'd be using them and it would suck if I finally got to play with someone and have them come out of the back of the medicine cabinet all furry and green.  I suppose I could do my yearly check up, now and ask my terribly handsome doctor if there is a logical, non-scary explanation for Abe's absence.  I can't have it.  I like Abe a lot!  I think he's a righteous dude.
Posted by Danny in WeHo at 7:41 PM