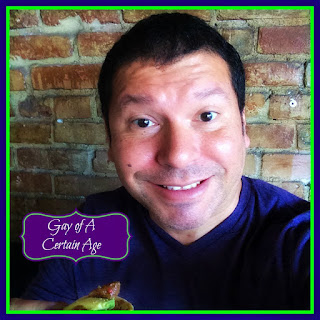 Today, two very kind fellow employees invited me to join them for lunch.
The sad story starts now, they said they were going to a taco place in the heart of West Hollywood, Boys Town and I had no idea which place they were talking about!  Apparently it has been there for months and I was clueless.  We arrive at Guisados and I note that I have also missed the new places next door,  Bar 10 and Bayou!  This is the hot spot of my very own city, just a 15 minute walk from my front door! How could I not know these places?

As I was munching through a delicious sample platter, with six of their many taco offerings, 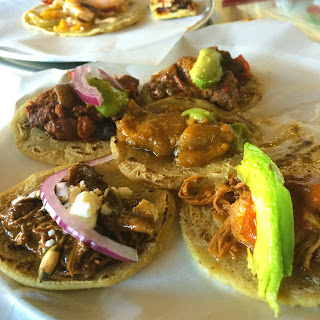 (I'd already snarfed one up before taking a picture) I thought that this simple menu of tacos only is perfect fare for Sunday Funday activities or just a simple, light dinner.  Then I thought,"why haven't I been here, yet?"  I glanced up, shuddered and thought, "oh, THAT'S why."  Across the street is Pump, Lulu Whatsherface from Idiot Wives of West Of West Hollywood's restaurant.  I've avoided this part of town since the once delightful Abby turned intro Stupid White Girlz hanging with their "Gays" and the homophobic assholes who want the Stupid White Girlz.  Even more, I don't come here because of the icky people I'm sure Pump attracts.  It's the perfect hideous pairing for the Abby.

As a Gay of A Certain Age, I like things how I remember them.  I remember Sundays starting at Marix for margaritas, then heading into Boys Town on foot and ending at the Abby, a sprawling gay haven where gays of all types convened and ignored each other.  When the Abby started getting icky with stupid girlz trying to be like Harpy Griffin and collecting Gays like they were Hello Kitty Pez, we would end our tour at HERE, just short of the Abby.  Then, it started being no fun.  I don't like to even talk about those awful reality shows that showcase stupidity that affects their idiot audiences who learn that that behavior gets them attention.  So when Pump opened up, I decided that the area has been infected with douchebags and their douchebaggery and vowed not to return.  Apparently, I'm very good at keeping a vow I don't exactly remember taking.  I may be wrong, of course.  Perhaps the people who enjoy Pump are perfectly nice, fun folk who enjoy a good laugh and Donna Mills stories, but I don't think so.  In any case, perhaps it would behoove me to visit the night life in the area with willing friends and revive my interest and social reach.  Why should I let the perceived presence of  vulgar jerks deprive me of delicious tacos and a possible hook up at Motherlode?  At any age, that'd be a nice night!