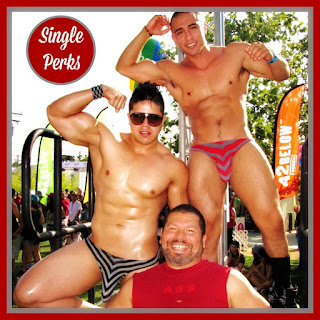 Golly, it's a good thing I'm single, otherwise I may not be able to oggle to my heart's content!
I don't have to work too hard to convince others that I do enjoy an eyeful of hunky man, so when I'm in the vicinity of such, I don't turn away shyly and if I happen to have my camera with me, I'll snap a few pics.  I've only had on one lone term relationship and one of the things I truly appreciated was that my man didn't mind my involuntary eye candy consumption.  The first few times together, we'd be driving and a Chris Hemsworth type would jog by shirtless (a regular occurrence in WeHo, almost as reliable as the bus schedule...) so, I'd turn away from the site, worried that I would offend my beau by glancing at a hot piece o' beef in onion skin shorts.  To my relief he said, "You can look."  Which, of course, I did and by then, he was gone.  CURSES!
I really like that my guy knew that my looking at a hot guy in no way diminished my admiration for him.  He wasn't jealous at all.  He knew he didn't have to be.  Everything I had worth giving, I was giving to him.  He thought that ignoring the obvious was as ridiculous as I do.  I know his looking at a hunky guy doesn't mean that he's not into me.  If I was to feel threatened by that, it would be because I felt insecure about our relationship and the presence of some unknowing hot guy would be the least of my problems. The important thing for me is that if I'm in a healthy relationship, the site of Joe Manganiello walking towards us isn't going to make me or my mate suddenly end our relationship, as if Joe were some kind of Medusa. I know that I won't own my mate's eyes or mind or feelings and he certainly wouldn't own mine! If I ever felt the need to control those things about him (or control any of him, for that matter) then I would know that the relationship is unhealthy.
Fortunately, I'm single and I don't have to worry about any of that. So, until I find a fellow wide-eyed mate, I'll keep enjoying the view, and try not to get my eye poked out. Them's the perks!

By the way, I've been in the presence of hot mens on numerous occasions, as my camera can attest, and NOTHING has happened with any of them. So there! (saddy face)
Posted by Danny in WeHo at 6:29 PM