Getting Out - When Cities Collide 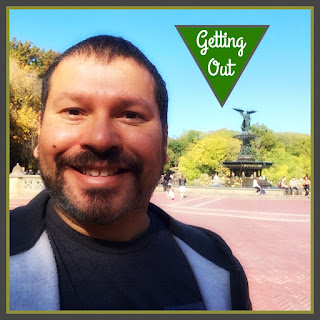 Today, I actually made it to Central Park!  For the past 5 or 6 visits, I'd forgo the park for the High Line on my one full day to explore the outdoors. It was a fine time, although, I didn't actually venture anywhere in the park that I hadn't been before. 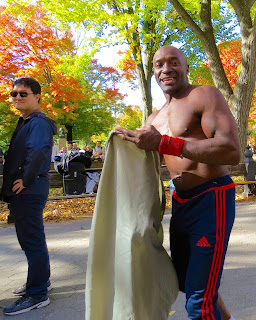 New to me, though, was a group of hunky street performers who entertained the crowds by forever teasing a really cool jump over five men.  They cleaned up!  I also enjoyed the leaves turning autumn colors.

This evening I saw AN AMERICAN IN PARIS 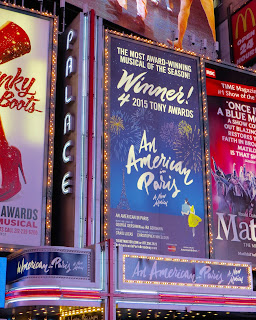 This was a great dance show!  I don't remember the movie as well as I'd like, but it felt like the stage show changed the story some and added some more plot.  I really enjoyed all aspects of the show, including the great use of projections.  So many shows have gone to using projections to scrimp on a set, but here it was integrated into the show and felt anything but cheap.  I haven't seen such great use of projections since SUNDAY IN THE PARK WITH GEORGE (2008).
I was also struck by the Gershwin tune that hit close to home and seems to have more meaning as the years pass; The Man I Love.  These lyrics were probably the earliest strands of DNA for this blog.

He'll look at me and smile
I'll understand;
And in a little while,
He'll take my hand;
And though it seems absurd,
I know we both won't say a word

Maybe I shall meet him Sunday
Maybe Monday, maybe not;
Still I'm sure to meet him one day
Maybe Tuesday will be my good news day

He'll build a little home
Just meant for two,
From which I'll never roam,
Who would - would you?
And so all else above
I'm waiting for the man I love.
George & Ira Hershwin were probably drinking Campari & Soda when they wrote that one.

After the show, instead of going to bed, as I am wont to do, I decided to abide by my Getting Out rule and met my friend Gerald (with a hard G) at Barracuda in Chelsea.  I am so glad I did! We ran into so many L.A. & N.Y. friends that both of us hadn't seen in a long time!  First I ran into actor/director/inspiration, Jack, then caught up with Gerald.  Then, in walks Harley & Jonathan whom I used to see in L.A.  and whom Gerald hasn't seen in forever.  We got so excited we had to take a pic! 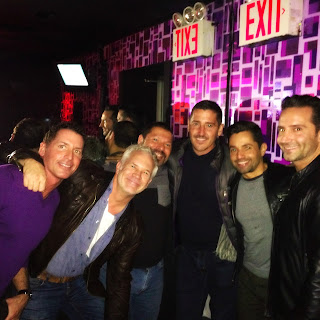 After the pic, playwright/director Del Shores saunters up to us for a "hello."  Also, the music was uncommonly good and the Campari & soda was strong!  I was having such a great time!  The only reason I left was to come blog about it!  Getting out tonight was an "f"ing blast!

Note: So the music was fantastic and I was doing these hot & sexy pelvic rolls and thrusts that were really me stretching out my lower back.  Ah, to be a Gay of A Certain Age...
Posted by Danny in WeHo at 11:30 PM

Email ThisBlogThis!Share to TwitterShare to FacebookShare to Pinterest
Labels: An American In Paris, Barracuda, Central Park, friends, Getting out, hunk, Shirtless