Getting Out - Jackie Beat's Kramps 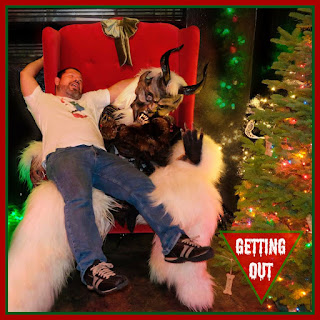 Sunday night I might have sat at home staring at my four foot Christmas tree, but I thought, "No, Danny, get out!"  So, I took a shower because I was happily enjoying my time alone in my home, in my underwear...  Then I hopped in my car with hopes that I would get in to see Jackie Beat's Christmas Show at the Cavern Club Theater. 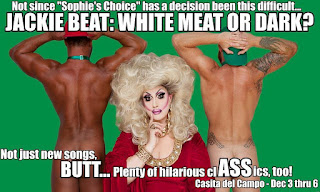 I was in luck and got in to enjoy Jackie's brilliant song parodies, in fab voice and a warm up by the delicious Deven Green.  I had a great time, but was disappointed that I could not get a photo with Jackie after the show, since she had a second show to prep for.  I'll just post this one of us in the early 2000's at Barracuda in Chelsea. 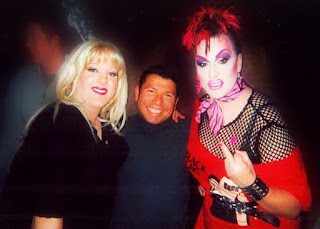 After Jackie's show I headed over to The Eagle, where I could enjoy a little quality time with Krampus! 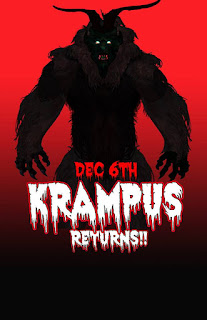 My friends, Billy & Barry, let me know they would be there for Lumberjacked and thought it would be fun if I dropped by.  SPOILER ALERT! It was!! 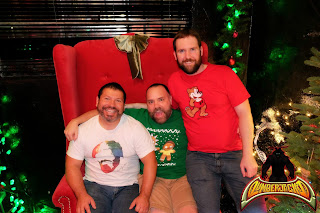 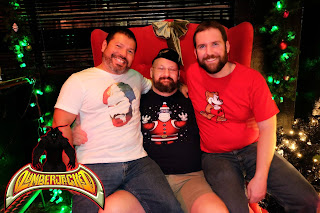 I enjoyed a playing "Catch Up" with the guys as well as all the beardy hotties all around me, and because they had no Campari on hand, I also enjoyed a few Gin & Tonics- my go to at this time of year because it tastes like Christmas trees!  Then it got all spewky when Krampus showed up! 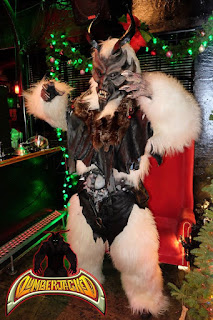 He stormed into the room and swooped me up into his hairy arms, then bent me over and spanked me! 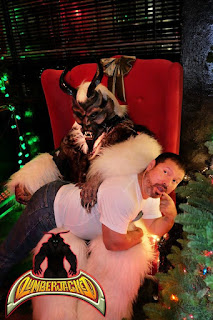 I must confess, I got a little hard.

As the night wore on and Krampus' spanks' stings wore off, I decided to get my last Gin & Tonic.  It was there that I met, HIM.  He was a cute guy and he called me handsome.  Then, I realized he was drunk.  I figured, since I am a nice guy, he was probably safer with me.  Plus, he was really aggressively into me. Next, we're in my car headed to his place because he ride-shared there, then he made his first error.   He complained about being his age and not having someone.  He was all, "Look, I'm 36 and I don't have anyone.  Isn't that sad?" To which I replied, "I'm 48."  I would have been more clever, but I was driving.  He replied, "You ARE?" I guess he wasn't more clever because he was drunk.  I enjoyed the delicious awkwardness for a little bit, then the aggressive flirting resumed.   He lived in a nice apartment with a mysterious roommate who opened the door for us and disappeared into a bedroom before we were even half way through the door.  Then, we got neked in his bedroom.  I wish I could say that we had a whirlwind sex session that resulted in my quitting my job and moving all of my prized Dunnys to my side of his bedroom, but no.  I think the drunkness started setting in and he started in with the "I'm 36.  I think I'm ready to settle down and have children.  Don't you think we should?"  Then, while I was continuing to get the fun neked stuff going, he kept calling me, "Sir".  No, it wasn't a sexy thing, I think it was because I am 12 years older than him, but it sounded very much like an usher at the Lunt-Fontanne telling a tourist that he's not allowed to take photos in the theater.  Don't get me wrong, he's a cute, nice guy, but as he settled into his drunk, he got more needy.  All I could think was, "I gotta work tomorrow."  So, I pressed fast forward on the neked play, got my jollies and let him give in to that sleepy feeling.  With one last, "Sir, come here.  Come here.  Sir..." I lay next to him until he was asleep, then slipped my clothes on and slipped out.

It's been quite a while since I've had a bar hook up and I can't say that I'm proud about sneaking out, but isn't that how most of those go?  Isn't that why they are more rare, now?  I don't miss those.  It wasn't a bad time, but it would have been nice if I had enjoyed the night without being reminded about being alone in such a sad way.  I felt sadder for him than myself, because I don't mind it so much, but he sounded like it's something that's gonna weigh on him for a while.  Or, maybe, my confidence and bravado gave him a little hope that even if he's single for 12 more years, it'll be okay.