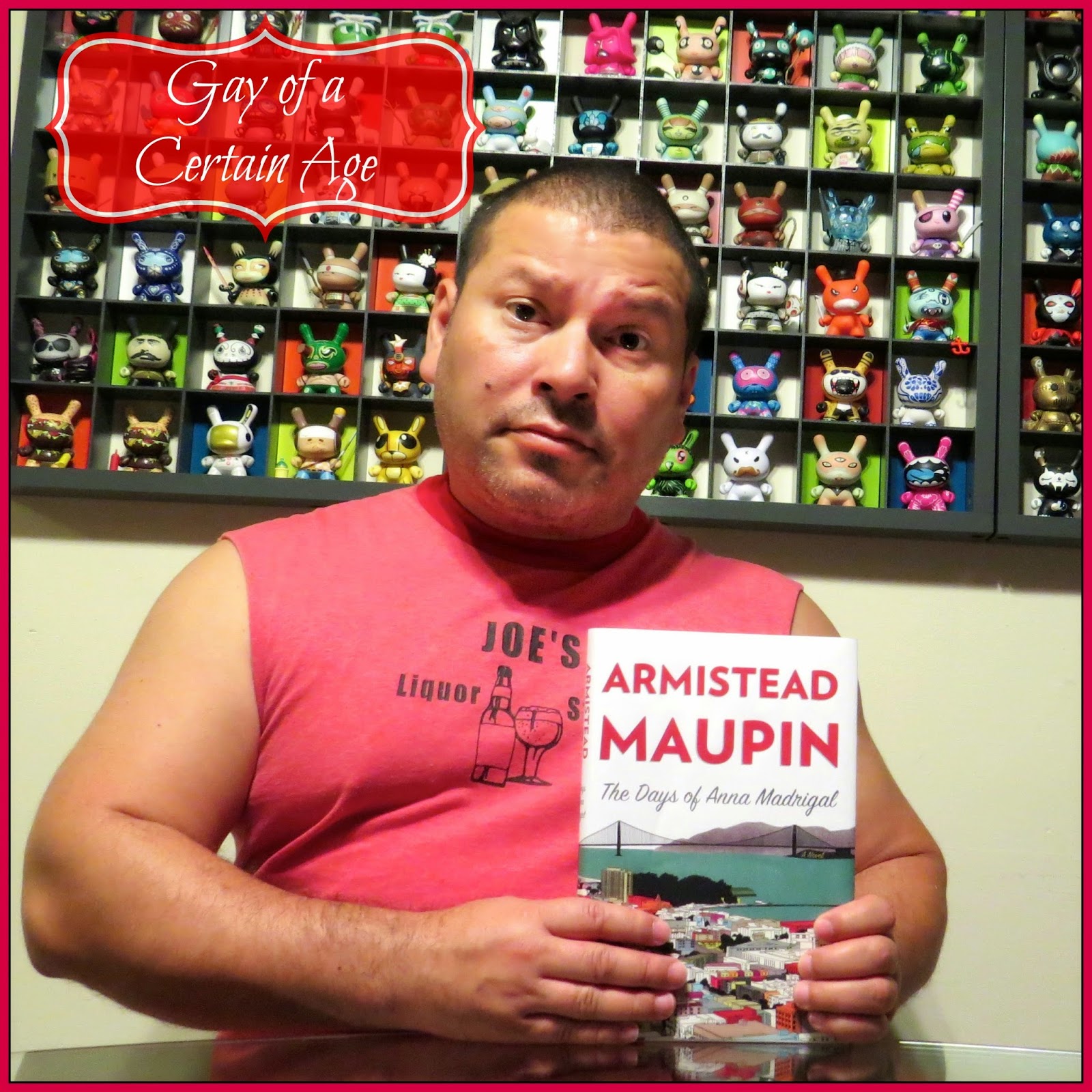 This book was published on January 21, 2014.  I could not wait to read it!  I pre-ordered it three months in advance.  I carefully moved books around to make room for this one next to the other TALES books.  I have not read it.  I haven't read it because THE DAYS OF ANNA MADRIGAL is the last book in a series of books that have meant very much to me.  As a Gay of a certain age, I was there when the six-hour mini-series based on the Original TALES OF THE CITY aired on PBS in 1994.  I watched the show over three nights and ate it up like an entire season of Knots Landing in six hours.  It was the first time I had seen gay characters treated like regular folks and it's probably no coincidence that I finally admitted to myself that I was gay less than a year later.
After seeing the mini-series, I immediately bought the book and zipped through it.  Mind you, I'm not one to dedicate much time to reading, but I sat and read all six books in the series, one after another and wished for more.  I remember reading and wishing I had a friend like Mouse (Nevermind that I already did...).  After letting the books settle within me, I turned it around and wished that I could BE a friend like Mouse.  I think in some ways I have succeeded, in many ways not.  Not only did the books influence my behavior, but the unlikely adventures featured in these magical books, helped me to look at people in a different way.  Instead of thinking, "What the fuck is wrong with them?" I would take time to imagine their own private Tale and writing off their behavior toward me as a direct result of accidentally dating a child pornographer.
I grew to love the characters, and would see the faces of the perfectly cast original stars of the first TALES whenever I thought about them. (There were Showtime presentations of the next two books that declined in quality- as far as treatment of the material).
I got so excited when Armistead Maupin revived the series with MICHAEL TOLIVER LIVES and followed up with Mary Ann Singleton's story.  Then, finally, this; THE DAYS OF ANNA MADRIGAL, which is said to wrap everything up.  I don't want it to end.  These books were there when I was at an early stage of self acceptance and started up again as I was accepting that my spunky attitude and a crapload of colorful plastic things may be all I have to keep me company.
Maybe I'm holding on to the memory without appreciating the influence.  Perhaps these books are more like training wheels that need to come off of my bike.

I think I can read the last book and let go of these people- this person, Anna Madrigal who embodied that strength of spirit, that generosity of love & acceptance, that absence of judgement, that teacher of life and that dispenser of truth that I hope I can be, even in the smallest way, sometime.  I will be brave, like Anna, and read this last book and hope that I can accept where it leaves me.
So, once more, I'll be transported to San Francisco, but it'll be up to Mr. Maupin to determine whether I return a wreck or at peace.  Wish me luck.
Posted by Danny in WeHo at 7:00 AM

Email ThisBlogThis!Share to TwitterShare to FacebookShare to Pinterest
Labels: Anna Madrigal, Armistead Maupin, Gay of a certain age, Tales of the City