This Is Why I Am Single - Jesus Cripes! 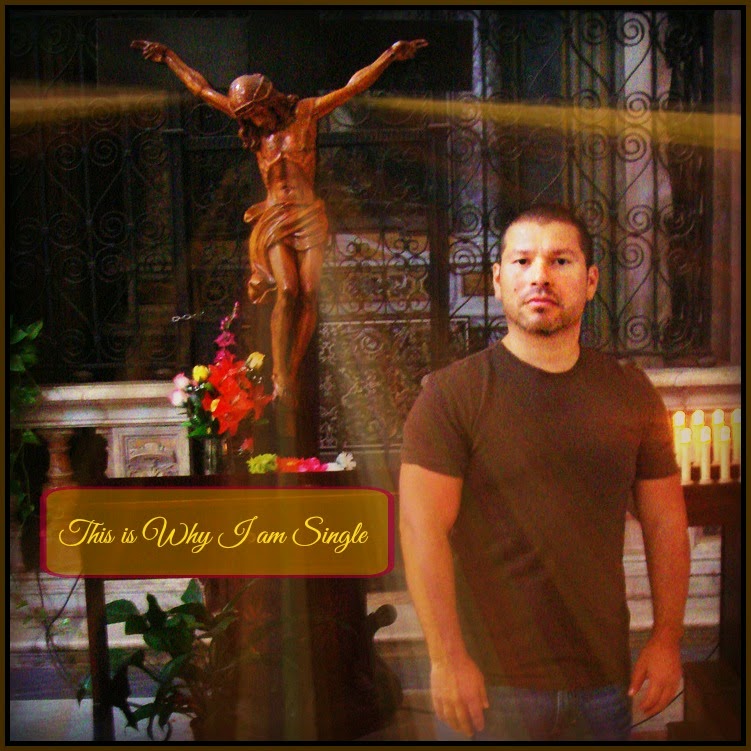 Apparently, this guy died on a cross so that I wouldn't be able to get married.  I don't know how he knew that it would be an issue, over 2,000 years later, but he did it.  Now, some people think he died for everyone's sins, and was all about peace & love.  Not true!  He died so that Republicans could slip his name into any issue in order to get support from the masses.  He died so that gay folk may not get married, so that gay folk may not see their loved ones in hospitals, and so that gay folk could be murdered in his name.  He never said anything like that in The Bible, if you believe in that sort of thing.  He died, so that people would follow ink and paper to the literal rule, rather than follow their hearts and minds.  He died so that people could get rich by mentioning his name.  He died so that Mathew Shepard could burn in Hell.  What an asshole.
I personally don't think this guy died for all those things.  I don't think he's an asshole.  I think he died because he tried to show that his God was not what everyone else was saying he was.  I think he died because churches had become places of profit, rather than worship.  I think, if I believe the Bible, that he hung out with a whore and 12 other guys who went fishing a lot.  I don't think he'd have trouble with guys who like guys.
Who I do think are assholes are those who use his name to forward their hate, fear mongering and profit.  The ones who are assholes are those who disrespect others who choose not to believe that Jesus is all that and a bag of wafers, and try force others to live by their religious beliefs.  Why should anyone be forced to live by the Bible, anymore than they are forced to live by the Quran or by Erma Bombeck's The Grass Is Always Greener Over the Septic Tank?   I shouldn't be forced to live by anyone's religious beliefs.  I should be able to engage in a civil ceremony without any religious faction telling me that I may not.  It's as simple as that.

I'm not even dating anyone, so what do I care?

I care, because the oppressive energy behind this religious fervor is disheartening.  When I am told that I can not get married, I'm told I can not be loved.  Bam.  What is marriage, nowadays, but the ultimate expression of love?  Why does someone date someone else? Isn't it to find who they love enough to spend the rest of their lives with them?  To find someone to stay with until death parts them?  To say to me that I may not get married is to say to me that I am sentenced to die alone.
I have a very dear cousin who has said to me, that God does not and will not honor my marriage. That I may not get married.  I don't know if he realizes that he has said to me; that I may not express my love of someone else; that if I may not reach the destination of marriage, why bother making the the trip? Why bother trying to find someone that you can't marry, and if you're not married, you are living in sin.  If you express physical love with someone you are not married to, you are sinning. God hates sin. God hates you.  God meant for you to be alone.  Die alone.

Certainly, I don't believe any of those things are true, but my cousin does.  He chooses to believe that God does not want me to be with someone.

Or maybe, somewhere in the back of my mind I do believe it.  Maybe that's why I've gone this long without finding someone.  Maybe I am alone because a while back, someone who is so close to me told me that I am unworthy of love.

FUCK THAT!  I'm not a religious person.  I'm not sure whether I believe in God or not, but I do know that I have lived a terribly fortunate life, I can find good in myself & other people and I feel, at times, blessed.  I know that I can respect that people believe things differently than I do, and I do not try to force them to believe as I do.  I do not try to force them to go by my rules.  I am confident that if there is a God, I am as he made me and nobody who claims to worship that same God can honestly tell me any different.

All I can say is, at the moment, I am single and alone.

DOES THAT MAKE YOU HAPPY?

Email ThisBlogThis!Share to TwitterShare to FacebookShare to Pinterest
Labels: Christians, Jesus Christ, This is why I am Single