This Is Why I Am Single - Glenn


Hey, remember my Die Alone Buddy, Glenn?
Well, he's got a little to say about dating,
And it goes something like this...

LOSE USE MY NUMBER
by Glenn Gaylord

People always tell me I should write a book about my dating disasters. My rote response has always been, “This is my life. It’s not funny. I don’t gain anything from rehashing it.” Sure, I could commiserate with others, or save another lonely soul from making the same mistakes, but will my musings stop people from canceling at the last minute? Will they make people nicer? God, I hope so! Here goes.

I’ve been more or less single for the past 8 years and I can count the number of dates I’ve had, well, not on one hand, but let’s just say that I can count them, and that ain’t good. I blame Los Angeles. I blame my ever-increasing age, or my big nose, my not being super rich, or my failure at not having a 6-pack! I blame myself for poor judgment. I blame a culture supportive of the fact that more excitement is just over your shoulder or at your texting fingertips. I’ve thrown the blame around so much that it’s not important to me anymore. I’ve grown tired of advice from others if it includes the directive, “Stop looking and something will come along when you least expect it.” As Kristen Wiig’s SNL character, Aunt Linda, would say: 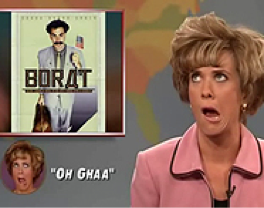 That advice doesn’t work for taxis, jobs, or eating, so why should it work when it comes to love? Believe me, I’ve tried it, and my life experience has proven to me that nothing gets dropped in your lap, except for bird poop. Yes, a bird once pooped in my lap, but I looked at the bright side. At least it showed up!

My dates tend to text at the last minute that they’re tired, despite confirming hours prior, or they just don’t show up at all. I’ve learned the ones who flake are most often the same people who tell me how much they hate it when people cancel at the last minute.

Now before you label me a bitter, old queen, I’ll defend myself by saying that I’m a pretty fun date. I have a wide variety of interests, from movies, hiking, biking, skiing, travel, and politics. I care about the world and have dedicated most of my life to making it better. I show up showered and fresh, and I’ll probably open a door for you at some point. Oh, I also play a mean game of footsie if you float my boat.

I just don’t count on that boat to dock every time. I expect the cancellation so that I won’t be surprised if it happens. I’ll have a soft Plan B with a friend, and sadly, exercise that option more often than not. The bright side is that I have a lot of wonderful people in my life who ARE there for me. I used to rant and rave at my almost-dates. I’d remind them of their shortcomings, call them rude, ask who raised them, and finish with a very curt and very final, “Lose my number!” The momentary satisfaction was nice, but I felt my soul being sucked out of my body. Now I just don’t respond. So if you feel the same as I do, then HMU, as the kids say. I promise I won’t bite if you cancel. I won’t say anything at all.
Posted by Danny in WeHo at 8:54 AM

Email ThisBlogThis!Share to TwitterShare to FacebookShare to Pinterest
Labels: Glenn, Glenn Gaylord, guest, This is why I am Single